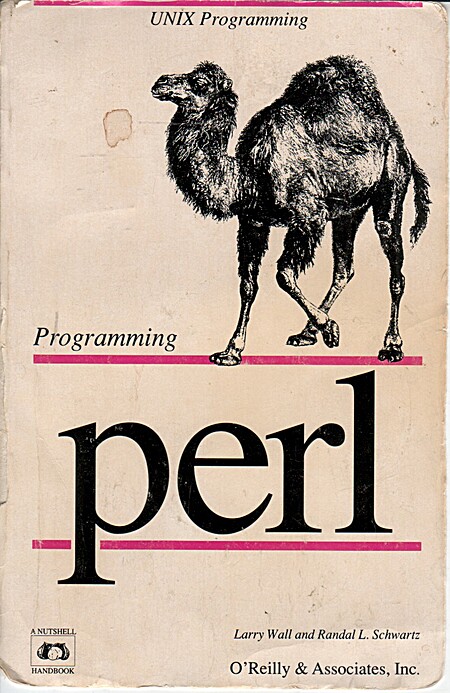 Perl is a powerful programming language that has grown in popularity since it first appeared in 1988. The first edition of this book, Programming Perl, hit the shelves in 1990, and was quickly adopted as the undisputed bible of the language. Since then, Perl has grown with the times, and so has this book.Programming Perl is not just a book about Perl. It is also a unique introduction to the language and its culture, as one might expect only from its authors. Larry Wall is the inventor of Perl, and provides a unique perspective on the evolution of Perl and its future direction. Tom Christiansen was one of the first champions of the language, and lives and breathes the complexities of Perl internals as few other mortals do. Jon Orwant is the editor ofThe Perl Journal, which has brought together the Perl community as a common forum for new developments in Perl.Any Perl book can show the syntax of Perl's functions, but only this one is a comprehensive guide to all the nooks and crannies of the language. Any Perl book can explain typeglobs, pseudohashes, and closures, but only this one shows how they really work. Any Perl book can say that my is faster than local, but only this one explains why. Any Perl book can have a title, but only this book is affectionately known by all Perl programmers as "The Camel."This third edition of Programming Perl has been expanded to cover version 5.6 of this maturing language. New topics include threading, the compiler, Unicode, and other new features that have been added since the previous edition.… (more)

webtechniques
Programming Perl [Third Edition] is the most authoritative book on Perl, and the authors' prose is a joy to read. While it may not be the best book for learning Perl, it's certainly worth having on your bookshelf.

LibraryThing member stpnwlf
Very good learning guide for PERL scripting.
10 more
LibraryThing member felius
The "Camel Book", as this book is often called, is the Perl Bible. It's not only an exhaustive reference, but clearly written any *funny* to boot. The humour pervades the text, making a sometimes dry subject much more approachable.

No Perl programmer can afford to be without this book, and anybody considering writing a technical reference should refer to this book to see how it's done.… (more)
LibraryThing member amartineau
A classic. I own two copies, at work and at home. Sometimes I pick a page at random, I'm sure it will make me laugh in a page or two.
LibraryThing member all4metals
I would say that this is THE BOOK for learning Perl. Funny and easy to read.
LibraryThing member hippietrail
Absolutely indispensible. I've tried other Perl books when I couldn't get my hands on mine and none even compare. Obviously later editions are even better.
LibraryThing member chrisemaj7
By far, the funniest and most useful programming book ever made.
LibraryThing member jdmays
The "Camel Book" is a classic. Long Live Perl!
LibraryThing member jrep
Excellent reference work. It was better, back in the first edition, when the programming examples were co-bound, but it's really getting so huge (all the useful libraries) I can see why they don't do that any more.

TMTOWDI!
LibraryThing member wweisser
This book has more information in the first few chapters than most entire perl books. I am a big fan of the "logically break things down to every last detail" genre of programming manuals (see The C Programming Language, Programming in Lua) and this book is one of the great examples of it.
LibraryThing member questbird
Technical manual. The 'camel book' has much useful info about perl, and not just dry technical stuff.
LibraryThing member acrn
A classic, but way too dense. It fits it's purpose of presenting a general view of the language, but i haven't learned Perl from it. Well, i don't work with Perl at all, but knowing that it is such a powerful language i might take another peek at it in the near future. Or when Perl 6 is released.
Fewer