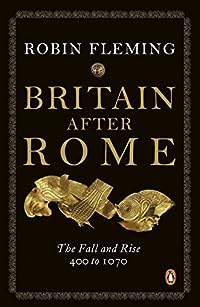 Britain After Rome: The Fall and Rise, 400 to 1070: Anglo-Saxon Britain Vol 2 (The Penguin History of Britain)

The Penguin History of Britain (2)

What was Britain like in the Dark Ages? Who walked across the landscape we now inhabit? Do objects such as those found in the Staffordshire hoard reveal a far more sophisticated, wealthy and militarized society than we had previously imagined? Britain After Romestitches together a wealth of research and imaginative engagement to bring us as close as we can hope to get to the tumultuous centuries between the collapse of the Roman Empire in the West and the arrival of the Normans nearly seven centuries later. Robin Fleming depicts a country whose towns were abandoned, where Christianity had disappeared, and where immigrants and invaders came to settle. Yet it is also the world in which many of today's villages were founded, and Britain's vernacular languages and political arrangements were forged. Britain after Romeoffers tantalizing glimpses of the surprising and resilient peoples who remade Britain in the centuries after Rome's collapse. It allows its readers to see Britain's history in a quite new light. 'An excellent, gripping and persuasive read . . . offers an entirely new insight into the past' British Archaeology' A sweeping work of impressive scope' Archaeology Review… (more)

LibraryThing member Caomhghin
I’ve always found this period, which used to be called the Dark Ages or the Age of Arthur or Anglo-Saxon, particularly interesting. Over the years interpretations, chronologies, events, facts on the ground and more have changed – sometimes quite drastically. At one time you had people like Geoffrey Ashe and John Morris positing a role for King Arthur in some detail. Then there were the Angles, Saxons and Jutes who came over from very specific places in north Europe and massacred all the Britons. But then historians started looking at the texts with a more sceptical eye. Why did Gildas describe his age in such apocalyptic terms? Well he was using the tropes of Latin rhetoric for one thing so may not have been interested in facts on the ground. Bede describes warrior peoples coming to Britain but the archaeological evidence shows no such thing? Well he was going back to the ‘heroic age’ of the great kingdoms of his time – an imaginary or much elaborated story. The archaeological evidence keeps growing as the examination of sites becomes more exacting and more precise.

This then is a history of what we know of the development of the lives, everyday lives, of the people who lived in England (and sometimes elsewhere in Britain) up to Domesday Book. The author eschews political and military history partly because for a major part of this period it is almost entirely missing and partly because she wants to tell a different story. So we follow the breakdown of the Roman urban model, the growth of isolated farmsteads, the appearance of local powerful men and their absorption by local power groups, sub-kingdoms, kingdoms and eventually a recognisable country. We see the local big men amass more and more of the available wealth and their conspicuous consumption after acquiring it. The towns grow from seasonal trading centres to local emporia to real towns and again we see their relationship to local and district power and to the church. In the country nucleated villages are created, apparently with the encouragement of local ‘lords’ who thereby accrue more of the surplus wealth which can then be sold on in the growing towns which in turn makes the lords even richer.

I have never read a better description and explanation of the changes in religious life, of how early monasteries and minsters were radically different places from later Benedictine monasteries which started to appear in the eleventh century. She describes the gradual absorption of the new religion which is evidenced in the graves of ‘believers’ who at first combined the ‘best’ of the old and the new and only gradually adopted more regular Christian practices. While building a parish church for your manor was an act of piety, it was also a display of your wealth and, better still, a means of accumulating wealth as a portion of tithes and burial fees accrued to the lord. Then as now people were complex and often had contradictory and complicated opinions, beliefs and actions.

From time to time the author picks a specific village, monastery or settlement. What people ate, wore or worshipped is explored or we even get a feel for individual lives of grinding hard work and constant debilitating illness, unless they were clergy and elites in the later centuries who even show signs of obesity!

A couple of cavils. The book barely looks outside of England. Apart from the very occasional foray over the borders this is a history of English people. Perhaps too little of the written record is explored or explained especially as it so often contradicts the archaeological record.

Nonetheless covering England it gives a real feel for the growth of a new society from the end of the Roman period.… (more)
1 more
LibraryThing member Steve.Bivans
Absolute MUST READ, if you want to know what life was like for the 99% that weren't kings or bishops. Fascinating narrative, woven together with thousands of threads of material evidence. If you want to write history using archaeology, you have to read this book. This is how history should be written, but so rarely is.
Fewer

Britannia: The Failed State: Ethnic Conflict and the End of Roman Britain by Stuart Laycock
The Penguin History of Britain: The Struggle for Mastery (Allen Lane History S.) by David Carpenter
Anglo-Saxon England (Oxford History of England) by Frank M. Stenton
A Brief History of the Anglo-Saxons: The Beginnings of the English Nation by Geoffrey Hindley
The Emergence of the English (Past Imperfect) by Susan Oosthuizen
23 more
Britain AD: A Quest for Arthur, England and the Anglo-Saxons by Francis Pryor
The Hollow Crown: A History of Britain in the Late Middle Ages: Vol 4 (Allen Lane History S.) by Miri Rubin
The Anglo-Saxons by James (ed) Campbell
The Age of Sutton Hoo: The Seventh Century in North-western Europe by Martin (ed) Carver
An Age of Tyrants by Christopher Snyder
The Inheritance of Rome: A History of Europe from 400 to 1000 by Chris Wickham
The King in the North: The Life and Times of Oswald of Northumbria by Max Adams
Rome, Britain and the Anglo-Saxons (Archaeology of Change S.) by N.J. Higham
Aethelstan: The First King of England (The English Monarchs Series) by Sarah Foot
Sutton Hoo: Burial Ground of Kings? by Martin Carver
Bloodfeud by Richard Fletcher
From the Vikings to the Normans (Short Oxford History of the British Isles) by Wendy Davies
Cnut by M.K. Lawson
Britain BC: Life in Britain and Ireland Before the Romans by Francis Pryor
Britain and the End of the Roman Empire by Ken Dark
Dark Age Naval Power by John Haywood
From Roman Provinces to Medieval Kingdoms (Rewriting Histories S.) by Thomas F.X. Noble
The Earliest English Kings by D.B. Kirby
Domesday Book by Alecto Historical Editions
Aelfred's Britain: War and Peace in the Viking Age by Max Adams
Roman Britain: A New History by Guy de la Bedoyere
In the Land of Giants by Max Adams
The End of Roman Britain by Michael E. Jones
Fewer