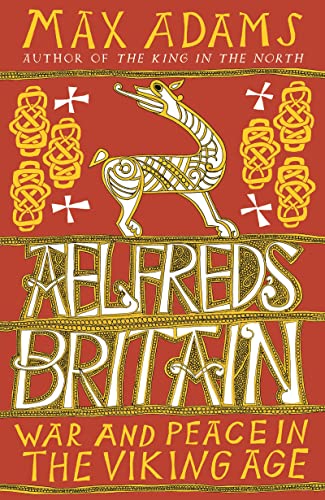 Aelfred's Britain: War and Peace in the Viking Age

In 865, a great Viking army landed in East Anglia, precipitating a series of wars that would last until the middle of the following century. It was in this time of crisis that the modern kingdoms of Britain were born. In their responses to the Viking threat, these kingdoms forged their identities as hybrid cultures: vibrant and entrepreneurial peoples adapting to instability and opportunity.Traditionally, Alfred the Great is cast as the central player in the story of Viking Age Britain. But Max Adams, while stressing the genius of Alfred as war leader, law-giver, and forger of the English nation, has a more nuanced narrative approach to this conventional version of history. The Britain encountered by the Scandinavians of the ninth and tenth centuries was one of regional diversity and self-conscious cultural identities, depicted in glorious narrative fashion in The Viking Wars.… (more)

LibraryThing member Shrike58
While I'm going with the current consensus and giving this book a rating of 4 stars, I might give it a rating of 3.75 if one could go more granular. Part of this is expectations, in that while Adams does spend much time on conflict and friction between Vikings and the inhabitants of the British Isles, the original title of "Aelfred's Britain" gives one a better sense of what this book is about. This is as Adams' main goal is to put Aelfred into his context as being the most important ruler in an ever shifting constellation of very localized social entities, rather than being an anachronistic ruler of a unified kingdom. Also, while Adams does wear his learning quite lightly, this probably isn't the first book one should pick up on the topic. It's like a mosaic of what the current state of play suggests we can say about the period in question; and one still winds up with the feeling that the work is less than the sum of the parts.… (more)
1 more
LibraryThing member john257hopper
This is a very well researched and written account of the period of Viking influence on the whole of the British Isles and Ireland, from the infamous initial attack on the Holy Island, Lindisfarne, off the Northumbrian coast on 8 June 1793 (I was on the island on the day of the anniversary this year), covering a period of some 160 years until the last Viking king of York was defeated by the English king Edred in 954 and England became, more or less, a united country (the Viking influence continued later on and of course Danish Canute and his sons ruled England for some 26 years in the following century). There is a lot of discussion of literary and archaeological evidence and the reader gets a strong sense of the patchwork of small kingdoms, alliances and struggles across the country, and how far the country was from being a united England, even after the efforts of Kings Alfred, Edward and Athelstan to unite the main kingdoms of Wessex and Mercia, and attempt to exert influence over East Anglia and Northumbria. Viking influence on what would later become France is also covered to some extent, as it illustrates how the Vikings divided their attempts and focused on one country to allow the other country to recover somewhat before it was fit to be raided again for riches and resources. This book is richly illustrated and has genealogical tables and many footnotes. It is a worthy and deep look at this crucial period in the history of the British Isles… (more)
Fewer

The King in the North: The Life and Times of Oswald of Northumbria by Max Adams
In the Land of Giants by Max Adams
Children of Ash and Elm: A History of the Vikings by Neil Price
The Origin of Empire: Rome from the Republic to Hadrian (264 BC - AD 138) by David Potter
Imperial Tragedy: From Constantine's Empire to the Destruction of Roman Italy AD 363-568 by Professor Michael Kulikowski
16 more
The Northmen's fury : a history of the Viking world by Philip Parker
Seapower States: Maritime Culture, Continental Empires and the Conflict That Made the Modern World by Andrew Lambert
Philip and Alexander: Kings and Conquerors by Adrian Goldsworthy
The Scythians: Nomad Warriors of the Steppe by Barry Cunliffe
The Black Prince by Michael Jones
Ravenna: Capital of Empire, Crucible of Europe by Judith Herrin
Britain After Rome: The Fall and Rise, 400 to 1070: Anglo-Saxon Britain Vol 2 (The Penguin History of Britain) by Robin Fleming
Mercia: The Anglo-Saxon Kingdom of Central England by Sarah Zaluckyj
The Vikings and Their Enemies: Warfare in Northern Europe, 750–1100 by Philip Line
King and Emperor: A New Life of Charlemagne (Allen Lane History) by Janet L. Nelson
The Rise of Rome: 1000 BC - 264 BC by Dr Kathryn Lomas
The Crusader Armies: 1099–1187 by Steve Tibble
The Brothers York: An English Tragedy by Thomas Penn
The Habsburgs: The Rise and Fall of a World Power by Martyn Rady
BATTLES OF THE DARK AGES by Peter Marren
Queen Emma and the Vikings: A History of Power, Love and Greed in Eleventh-Century England by Harriet O'Brien
Fewer