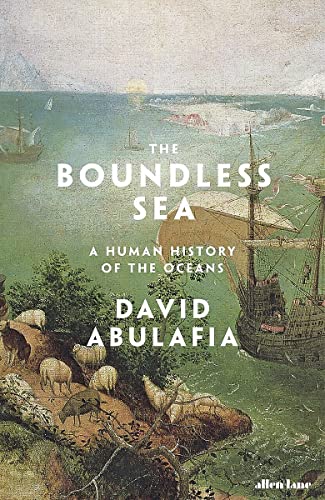 The Boundless Sea: A Human History of the Oceans

"David Abulafia's new book guides readers along the world's greatest bodies of water to reveal their primary role in human history. The main protagonists are the three major oceans-the Atlantic, the Pacific, and the Indian-which together comprise the majority of the earth's water and cover over half of its surface. Over time, as passage through them gradually extended and expanded, linking first islands and then continents, maritime networks developed, evolving from local exploration to lines of regional communication and commerce and eventually to major arteries. These waterways carried goods, plants, livestock, and of course people-free and enslaved-across vast expanses, transforming and ultimately linking irrevocably the economies and cultures of Africa, Europe, Asia, and the Americas"--… (more)

LibraryThing member expatscot
Very good and thought provoking history of trade over and around the world's oceans. Abulafia strays a little from the coast on occasion, but with reason and one can see the usual sort of threads he disappears along in the same way as everyone else who writes these sorts of books seems to. Overall a really good read.

Children of Ash and Elm: A History of the Vikings by Neil Price
Ravenna: Capital of Empire, Crucible of Europe by Judith Herrin
Revolutionary Empire: Conflict Across the Seas and the Rise of the British Empire in the East
Seapower States: Maritime Culture, Continental Empires and the Conflict That Made the Modern World by Andrew Lambert
Sea People: The Puzzle of Polynesia by Christina Thompson
8 more
Dominion: How the Christian Revolution Remade the World by Tom Holland
The Year 1000: When Explorers Connected the World – and Globalization Began by Valerie Hansen
Imperial Twilight: The Opium War and the End of China's Last Golden Age by Stephen R. Platt (author)
A History of the Bible: The Book and Its Faiths by John Barton
Europe: A Natural History by Tim Flannery
The Habsburgs: The Rise and Fall of a World Power by Martyn Rady
The Light Ages: A Medieval Journey of Discovery by Seb Falk
Heart of Europe: A History of the Holy Roman Empire by Peter H. Wilson
Fewer