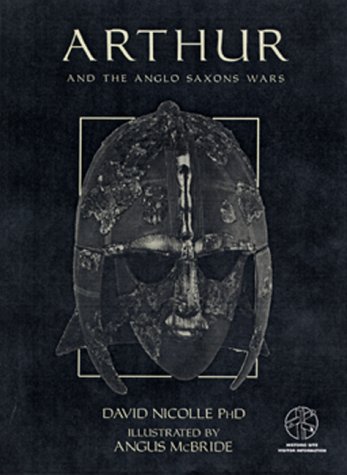 The Arthurian Age; the Celtic Twilight; the Dark Ages; the Birth of England; these are the powerfully romantic names often given to one of the most confused yet vital periods in British history. It is an era upon which rival Celtic and English nationalisms frequently fought. It was also a period of settlement, and of the sword. This absorbing volume by David Nicolle transports us to an England shrouded in mystery and beset by savage conflict, a land which played host to one of the mostenduring figures of our history - Arthur.

LibraryThing member wealhtheowwylfing
A really excellent resource about the time between the Roman's loss of power in England and the Germanic tribes' ascension.
2 more
LibraryThing member DinadansFriend
This slim book has not enough information, and not enough pictures. this is a big problem with Dark age material, and doubly so by the mythological nature of the titular king. But it nourishes the fantasy a little.
LibraryThing member AtomicSeaCreature
This book was originally written and published in 1984 - and there has been since quite a fair amount of advance in theory and archeology around the reality basis regarding the potential history of a real Arthur. However much more so than that seemingly primary point of the publication - It's really a pretty neat volume for historical, anthropological and archeological information on the region and period encompassing the diversity of culturally distinct peoples and political factions. Anyone looking for info on the basis of the Arthurian legend should probably check out more recent sources. As a concise and easy to read source for those aforementioned points however I found this book to be really pretty genuinely good, truly interesting and informative.… (more)
Fewer