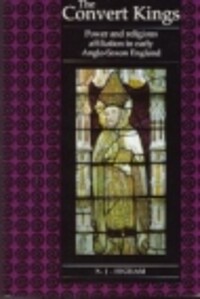 The story of the conversion of the English to Christianity traditionally begins with Augustine's arrival in 597. This text offers a critical re-evaluation of the process of conversion which assesses what the act really meant to new converts, who was responsible for it, and why particular figures both accepted conversion for themselves and threw their influence behind the spread of Christianity. The conversion has often been seen as something which missionaries did to the English. The book restores responsibility to the English and, in particular, King Aethelbert, Edwin, Oswald and Oswin, and it is their religious policies that form the focus of this text.

After Rome: C.400-c.800 (Short Oxford History of the British Isles) by T. M. Charles-Edwards
An English Empire: Bede, the Britons and the Anglo-Saxon Kings (Origins of England S.) by N.J. Higham
The Church in Anglo-Saxon Society by John Blair
The Earliest English Kings by D.B. Kirby
Oswald: Northumbrian King to European Saint by Clare Stancliffe
19 more
The Lindisfarne Gospels: Society, Spirituality and the Scribe (British Library Studies in Medieval Culture) by Michelle P. Brown
Northumbria's Golden Age by Jane Hawkes
Cnut by M.K. Lawson
The Kingdom of Northumbria, A.D.350-1100 (History S.) by N.J. Higham
An Age of Tyrants by Christopher Snyder
Rome, Britain and the Anglo-Saxons (Archaeology of Change S.) by N.J. Higham
From the Vikings to the Normans (Short Oxford History of the British Isles) by Wendy Davies
The Blackwell Encyclopedia of Anglo-Saxon England by Michael Lapidge
The Origins of Beowulf: and the Pre-Viking Kingdom of East Anglia by Sam Newton
Aethelred II: King of England 978-1016 by Ryan Lavelle
Anglo-Saxon Food and Drink: Production, Processing, Distribution and Consumption by Ann Hagen
Warfare and Society in the Barbarian West 450-900 (Warfare & History Series) by Guy Halsall
The English Conquest: Gildas and Britain in the Fifth Century by N.J. Higham
Anglo-Saxons: Studies Presented to Cyril Roy Hart by Simon Keynes
A history of the English Church and people (Penguin classics) by Bede
The Anglo-Saxons by James (ed) Campbell
Early Christian Ireland (The Cambridge History of Ireland) by T. M. Charles-Edwards
Bloodfeud by Richard Fletcher
The Age of the Picts (History S.) by W.A. Cummins
Fewer