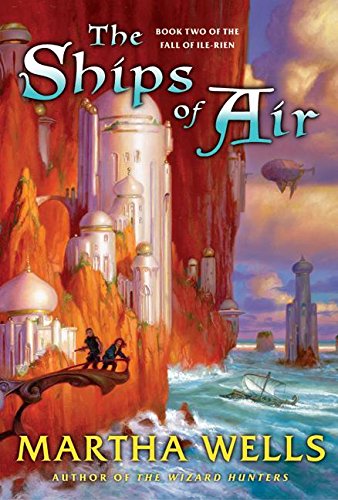 The Ships of Air

Known for her lush, intricate worlds and complex characters, acclaimed author Martha Wells has delighted readers with her extraordinary fantasy novels of daring and wit. With The Wizard Hunters she launched her most ambitious undertaking yet -- the return to the beloved world of the Nebula Award-nominated The Death of the Necromancer and The Fall of Ile-Rien. Now the saga continues in a triumph of suspense and imagination. Despite a valiant struggle against superior forces, the country of Ile-Rien has fallen to the onslaught of the relentless Gardier, a faceless army of sorcerers determined to conquer all civilization. To save the remnants of her country, former playwright Tremaine Valiarde undertakes an epic journey to stop the Gardier. Rescuing the proud ship Queen Ravenna from destruction, Tremaine and a resolute band of sorcerers and warriors set sail across magical seas on a voyage of danger and discovery. For the secret to defeating the enemy -- and to rescuing the world from the Gardier's inimitable hatred -- lies far beyond the walls of the world, and only the tenuous ties of friendship and honor will keep the band together. But the Gardier are not the only evil in this tumultuous world, and an ancient terror stalks the ornate rooms and shadowy decks of the Queen Ravenna -- a force so malevolent and enigmatic that even the growing power of the sorcerer's sphere may not be enough to save Ile-Rien from utter ruin.… (more)

LibraryThing member Shrike58
The epic continues, as our heroine Tremaine Valiarde copes with lurking terrors, smashed hopes, zombie sorcerer commissars, untrustworthy magical machines, and aggravating in-laws as her party tries to reach sanctuary from the Grendier menace. Several ticking time bombs do detonate to satisfactory result and the reader is given a bit more picture of the great enemy, who do seem to be victims in their own way. The only reason I don't rate this book higher is that it is the middle book of a larger work.… (more)
6 more
LibraryThing member robrobriver
The second book in the trilogy "The Fall of Ile-Rien". I tend to rate books by whether I remember the names of the characters. I enjoyed Tremaine and Ilias, but it was the great liner Queen Ravenna that I found myself remembering the best. I worried that the author might sink her; when you find yourselves worrying about the inanimate characters, you know you have a good book.… (more)
LibraryThing member macha
i liked this one. but so far it's the only one that's come to hand, and it's the middle book of a trilogy. so i was a bit hampered getting a sense of the scale of the things. not to mention why one of the worlds (Ile-Rien) seems to be derived from our contemporary culture, only it's gone a bit towards the medieval on account of the existence of magic. so i could have used a gloss, and for that matter going with one of them there cast of characters would have been kind. the interesting thing, though, is the character Tremaine, who feels really real, is modern as all get out, and is interesting and likeable enough to see me off looking for Books 1&3.… (more)
LibraryThing member wealhtheowwylfing
The plot ramps up the stakes and excitement, but Wells never lets it overshadow her characters. Good, well-written fantasy.
LibraryThing member elenaj
This one was a slow starter for me (perhaps because it was hard to jump right back into the world - or perhaps because the protagonist's sense of disconnection at the beginning of the book bleeds into the narrative), but it picked up after about 75 pages and continued to build in excitement and intrigue for the rest of the story. I especially appreciate the unusual characterization and worldbuilding.… (more)
LibraryThing member quondame
This is an excellent sequel. Good in plot, pacing and characters, adding and developing them and the worlds they inhabit.
LibraryThing member pwaites
The Ships of Air is the second book in the Fall of Ile-Rien trilogy, which starts with The Wizard Hunters. I suggest reading them in order, but I actually enjoyed The Ships of Air more than the first installment.

Ile-Rien has been overrun by the Gardier, the mysterious enemies who’ve been attacking them from another world. Everyone who can has evacuated, and the front of the war has moved on to a neighboring country. Our protagonists are aboard the Queen Ravenna, a luxury liner which has been converted for the war effort and given the ability to travel between worlds with the aid of a sorcerer. The goal is to avoid the Gardier patrols and get the refugees to safety. But the ship itself is not entirely safe, for a malevolent and shadowy force stalks it.

I’m hard pressed to say why I liked The Ships of Air better than The Wizard Hunters. One explanation may be that I’m simply in a better mental place now. However, I think I was a lot more attached to the central characters here. Tremaine in particular grew on me. She has that fierceness that I find so appealing, and she can be rather ruthless as well. Plus she can be hilarious at times, and I love it when other characters are taken aback by her. I think Gerald actually did a facepalm at one point – it was delightful. While I wouldn’t call The Ships of Air a comedic book, there were moments when I laughed. There’s a marriage subplot that for once might be one of the highlights of the book and which lends itself to some unexpected humor.

I felt like the setting was a lot stronger in this book as well. I really liked the luxurious setting of the Queen Ravenna and how it contrasted with the current circumstances. Apparently it is based on an actual ship, the Queen Mary, which I really need to look up. The subplot on the alliance between the Syprians and the Riens was something else I really enjoyed, particularly the culture clash between the two groups. There’s some new (and characteristically inventive) settings off the boat too. We get a bit more of a glimpse into the Gardier, and it’s fascinating. I can’t wait to find out more in book three.

By the last hundred pages, I wasn’t able to put The Ships of Air down. Martha Wells was already one of my favorite fantasy authors, and this book has cemented her in that position.