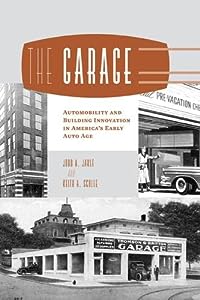 by John A. Jakle

The garage--whether used for automobile storage, parking, repair, or sales--has been an American commonplace for so long that it is surprising how little attention it has drawn from scholars tracing the country's architectural and cultural heritage. In this compellingly written and profusely illustrated book, John Jakle and Keith Sculle--two of the nation's foremost experts on "Roadside America"--bring their analytical acumen and meticulous research skills to bear on the remarkably rich history of this overlooked feature of the U.S. landscape.             Beginning with the days when only the wealthy could afford cars (and their chauffeurs doubled as mechanics), the authors show how blacksmiths and carriage repairmen quickly adapted to the increasing ubiquity of the automobile. Noting differences from region to region as well as between large cities and smaller population centers, they look at the growth of car dealerships, with their separation of service and sales floors, and the parallel rise of small, independent repair shops--businesses that have steadily disappeared from the national scene, though some of the buildings that once housed them have survived, refitted for other purposes. The domestic garage--first conceived as a detached structure, then integrated with the house itself--gets its own chapter. And throughout, the authors explore the various ways in which concerns with practicality, commerce, and aesthetics have dictated how garages were laid out and constructed and what services they offered.             A worthy complement to the authors' earlier collaborative studies of the gas station and the parking lot, The Garage will engage an eclectic audience of architectural and material-culture specialists, historic preservationists, antique car enthusiasts, local historians, and others fascinated by the impact of the automobile on early America and its legacy in the built environment of modern communities.… (more)