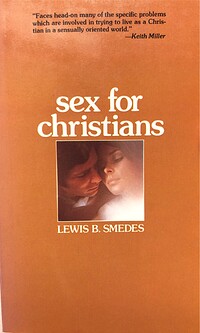 by Lewis B. Smedes

Now considered a classic statement on sex and sexuality from a Christian perspective, Lewis B. Smedes's Sex for Christians offers a frank yet compassionate discussion that is refreshingly open-minded and strongly biblical. The book is divided into three major sections. The first, "Sex and Christian People," overviews human sexuality -- its created goodness, its sinful distortions, and its redeemed potential -- what we are as human sexual beings. Part Two, "Sex and Single People," and Part Three, "Sex and Married People," are about sexual behavior in each succeeding stage of life -- the things we do as sexual beings. With the addition of an extensive epilogue, Smedes brings his text into clear focus with today's pressing issues -- AIDS, cohabitation, homosexuality, and the need to develop Christian strategies regarding sex. And with the hindsight of two decades since Sex for Christians first came out, Smedes presents an even stronger statement of his two sources of authority: the Bible's moral standards regarding sex, and the authority of reality as we discern it. Smedes's attempt to present "a Christian perspective for a truly human sexual life" has resulted in a sexual morality that, within a biblical perspective, is as liberating as it is limiting.… (more)

Not the Way It's Supposed to Be: A Breviary of Sin by Cornelius Plantinga