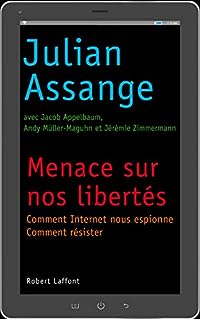 Cypherpunks are activists who advocate the widespread use of strong cryptography (writing in code) as a route to progressive change. Julian Assange, the editor-in-chief of and visionary behind WikiLeaks, has been a leading voice in the cypherpunk movement since its inception in the 1980s. Now, in what is sure to be a wave-making new book, Assange brings together a small group of cutting-edge thinkers and activists from the front line of the battle for cyber-space to discuss whether electronic communications will emancipate or enslave us. Among the topics addressed are: Do Facebook and Google constitute "the greatest surveillance machine that ever existed," perpetually tracking our location, our contacts and our lives? Far from being victims of that surveillance, are most of us willing collaborators? Are there legitimate forms of surveillance, for instance in relation to the "Four Horsemen of the Infopocalypse" (money laundering, drugs, terrorism and pornography)? And do we have the ability, through conscious action and technological savvy, to resist this tide and secure a world where freedom is something which the Internet helps bring about? The harassment of WikiLeaks and other Internet activists, together with attempts to introduce anti-file sharing legislation such as SOPA and ACTA, indicate that the politics of the Internet have reached a crossroads. In one direction lies a future that guarantees, in the watchwords of the cypherpunks, "privacy for the weak and transparency for the powerful"; in the other lies an Internet that allows government and large corporations to discover ever more about internet users whilehiding their own activities. Assange and his co-discussants unpick the complex issues surrounding this crucial choice with clarity and engaging enthusiasm.… (more)

LibraryThing member ohernaes
I had high hopes for this book after reading an excellent and entertaining review by Assange of "The new digital age" by Eric Schmidt (Google) and Jared Cohen (Condoleeza Rice, Hillary Clinton, Google) termed "The banality of 'Don't be evil'". In the review he discussed the threats to privacy posed
Show More
by the worrisome entanglement of the security industry and 'new/social media'.

Cyperpunks is formed as a conversation between Assange and his copatriots Jakob Appelbaum and Andy Muller-Maguhn and picks up on the same theme, but also the promise that cryptography may hold as a defence against the erosion of privacy (the title is a wordplay on this). Some of the stuff about cryptography was new to me and very interesting, however I often lost attention throughout the book due to its talkative style. I ended up a bit disappointed, but the topic is one of our age's most important, and it is always good to hear what those that are in the middle of the issues have to say.
Show Less
4 more
LibraryThing member gwak
Topically, a little disorganized, but the ideas are very important.
LibraryThing member uZiel_librarything
Certainly an eye-opening narration about the reach and penetration of state surveillance systems in our lives. Although it has now been four years and most of the information about such actions has now become public because of the Snowden revelations, the book still discusses some really good
Show More
points as to why and how the governments use such systems to control and manipulate citizens. The notion of having one's own private space without being monitored has almost vanished (or is swiftly reaching that stage). One must fend for themselves and gain the proper knowledge to defend against the violation of even basic human rights.

The end-notes of the book were really helpful in some cases. Still, there were some topics in the conversation where some background information might be helpful. It is not a literary piece of art work but a transcript of a discussion amongst four technocrats. Still a recommended read for anyone who is exploring this side of the technology.
Show Less
LibraryThing member jonfaith
It wasn't a view that one should simply complain about the burgeoning surveillance state and so on, but that we can, in fact, must build the tools of a new democracy.

Plagiarism has been the flashpoint on GR this weekend. I thought about the controversy when copyright law is called into question
Show More
throughout Cypherpunks. Sharing and privacy not only maintain autonomy, so the book goes, but each further civilization. It is difficult to argue with that. That said, this discussion was all a bit "meh" for me. Lord knows I hate that judgment but it sticks to me. There is total lack of rigor in this book. Points are made and then begins a retreat into glib rejoinders and cliché. It is important to recall that this occurred before the Snowden revelations. I will likely explore some secondary sources now.

Show Less
LibraryThing member malexmave
This book is a conversation between Julian Assange, Jacob Appelbaum, Andy Müller-Maguhn and Jeremie Zimmermann. If you know these people, you know what to expect: A discussion about the internet, freedom, censorship and surveillance. And that is exactly what you will get.

For me, that's fine. I
Show More
know that Jacob and Julian are very good with such discussions, and Andy and Jeremie are quite good at this kind of thing as well, as it turns out. There are no revolutionary new ideas here, but it serves as a short summary of the problems of the world and the internet, as seen by these people.

I picked this book up on sale for $1, which it is definitely worth. I am not sure how much more I would be willing to pay for it, though, simply because I basically already knew pretty much everything they are talking about. If you, however, are looking for an introduction into the world view of these people, by all means, give it a read.
Show Less
Fewer

To Save Everything, Click Here: Technology, Solutionism, and the Urge to Fix Problems that Don't Exist by Evgeny Morozov
The Shallows: What the Internet Is Doing to Our Brains by Nicholas Carr
Inside Wikileaks: My time with Julian Assange at the World`s Most Dangerous Website
The New Digital Age: Reshaping the Future of People. by Eric Schmidt . Jared Cohen