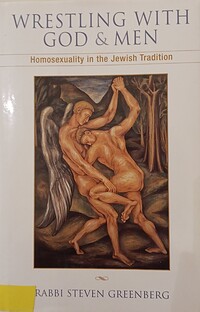 Wrestling with God and Men: Homosexuality in the Jewish Tradition

For millennia, two biblical verses have been understood to condemn sex between men as an act so abhorrent that it is punishable by death. Traditionally Orthodox Jews, believing the scripture to be the word of God, have rejected homosexuality in accordance with this interpretation. In 1999, Rabbi Steven Greenberg challenged this tradition when he became the first Orthodox rabbi ever to openly declare his homosexuality.     Wrestling with God and Menis the product of Rabbi Greenberg’s ten-year struggle to reconcile his two warring identities. In this compelling and groundbreaking work, Greenberg challenges long held assumptions of scriptural interpretation and religious identity as he marks a path that is both responsible to human realities and deeply committed to God and Torah. Employing traditional rabbinic resources, Greenberg presents readers with surprising biblical interpretations of the creation story, the love of David and Jonathan, the destruction of Sodom, and the condemning verses of Leviticus. But Greenberg goes beyond the question of whether homosexuality is biblically acceptable to ask how such relationships can be sacred. In so doing, he draws on a wide array of nonscriptural texts to introduce readers to occasions of same-sex love in Talmudic narratives, medieval Jewish poetry and prose, and traditional Jewish case law literature. Ultimately, Greenberg argues that Orthodox communities must open up debate, dialogue, and discussion—precisely the foundation upon which Jewish law rests—to truly deal with the issue of homosexual love.     This book will appeal not only to members of the Orthodox faith but to all religious people struggling to resolve their belief in the scriptures with a desire to make their communities more open and accepting to gay and lesbian members.… (more)

LibraryThing member Capfox
Religion and homosexuality are often placed at odds, and much of that, one could easily argue, is due to a few lines in the Tanach; in Judaism, this is reinforced by a variety of rabbinic laws as well, but cross-culturally, for many, that's probably the main deal. This book's author, an Orthodox
Show More
rabbi, definitely has had a lot of time to think about it.

What resulted from that is a look first at Greenberg's life story, followed by a tour through the specifics of the Biblical and Talmudic literature that defines the prohibition in Judaism, with some surprising results. (Turns out, without intercourse, having a gay partner is less bad for you than disobeying niddah laws that rule out sex before or immediately after menstruation.) He then looks at various different stories of homosexuals within the Bible, the rabbinic period, and more recent reactions.

The later sections have to deal with different rationales for why the rule against penetration might have been enacted, and ultimately deciding that it was because all men were equal, and it was deemed shameful and debasing to be the bottom, thus leading to a prohibition aimed against shaming others. It's an interesting take, followed by a sample conversation between a rabbi and a young man working out his place in Orthodoxy with regards to his sexuality. This part is interestingly done, but the frame it's placed in is rather choppy.

Anyway, this is a book with a good goal, and it does have a lot of interesting information, even if the style does get off base at points. Still, it's quite readable, and it's a good overview of the subject. I'm not totally sold on the spin he gives, but it's an interesting step in opening dialogue, at the least. That's a commendable and necessary thing.
Show Less
2 more
LibraryThing member melsmarsh
Very interesting book that as far as I know is one of the few that discusses gay Jewish identity from an Orthodox perspective. I look forward to meeting Rabbi Steve soon.
LibraryThing member bostonian71
Intelligent and impassioned text from a rabbi who is committed to bridging the textually-induced chasm between gay and lesbian Jews and the Orthodox world. With lucid arguments and moving stories from his own journey from the closet to a loving partnership and membership in a welcoming synagogue,
Show More
Rabbi Greenberg examines the Biblical and rabbinic references to same-sex relationships, picks apart the rationales that would condemn homosexual activity, and even produces a radical but convincing reinterpretation of the verses in Leviticus that have served as the source for so much repression and condemnation. It is with a little sadness that I return this to the library tomorrow -- but not too much, since I've already ordered it from Amazon!
Show Less
Fewer