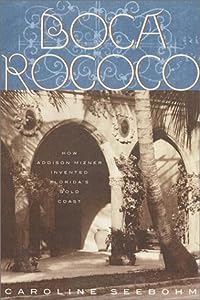 "When Addison Mizner built his opulent, glamorous mansions along the coast of southern Florida in the 1920s, he perfectly expressed America's growing power and confidence. The lyrical, Mediterranean aesthetic of Mizner's buildings that has come to define Palm Beach and Boca Raton characterizes one of the most extravagant periods in American history, when affluence and celebrity came together in a triumph of excess. Mizner perfectly embodied this flamboyant time. A beloved and colorful personality, he adored the headlines and they adored him back. His big build and wicked wit made him welcome in the social circles of San Francisco, New York, and Palm Beach. Yet one thing trumped his incorrigible personality. Despite enormous competition from his more conventional contemporaries, Addison Mizner proved to be one of the country's greatest domestic architects of the twentieth century." "His is a supremely American story. Reckless and reprobate, embroiled in family conflict, hugely popular with the fashionable set, vilified by critics, lionized after death, amassing huge wealth and then dying debt-ridden, Mizner lived a life that can be counted among the great American epics. Encompassing the most distant horizons of the American landscape, Caroline Seebohm draws on a cache of untapped materials - including never-before-seen plans and drawings - to place Mizner in the pantheon of legendary American characters. With skill and expertise, Seebohm reconstructs Mizner's pursuit of immortality through the palaces and villas he constructed and shows us how, thanks to his vision, the splendor and elegance of those buildings have come down to us as a dazzling record of a wild and wonderful period in American history."--Jacket.… (more)

LibraryThing member EricCostello
This is a biography of Addison Mizner, whose most notable achievement was the designing of a number of buildings in South Florida in the 1920s, especially in the area of Palm Beach. He did many other things (including panning for gold in the Yukon), and traveled extensively in his youth. He was
Show More
also an elder brother of Wilson Mizner, who by turns was a playwright and crook, and is really the central villain of this biography, since it was his actions (in relation to an extravagant project in Boca Raton) that ultimately ruined Addison Mizner. Addison Mizner, in this book and unlike other accounts, is treated sympathetically and seriously as an architect. Rather an interesting read.
Show Less