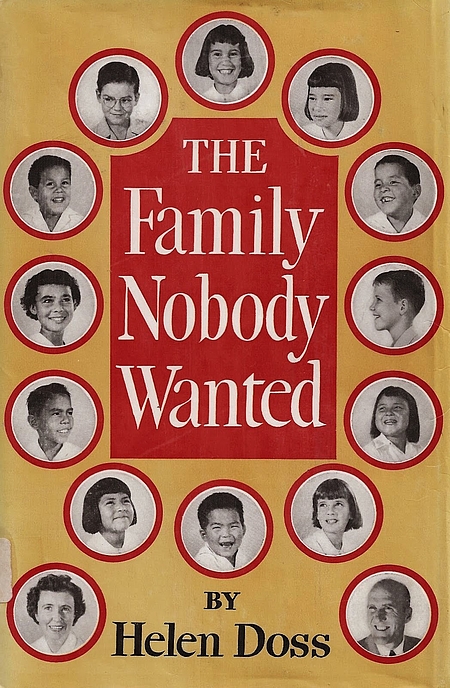 The Family Nobody Wanted

Doss's charming, touching, and at times hilarious chronicle tells how each of the children, representing white, Chinese, Japanese, Filipino, Korean, Mexican, and Native American backgrounds, came to her and husband Carl, a Methodist minister. She writes of the way the "unwanted" feeling was erased with devoted love and understanding and how the children united into one happy family. Her account reads like a novel, with scenes of hard times and triumphs described in vivid prose. The Family Nobody Wanted, which inspired two films, opened doors for other adoptive families and was a popular favorite among parents, young adults, and children for more than thirty years. Now this edition will introduce the classic to a new generation of readers. An epilogue by Helen Doss that updates the family's progress since 1954 will delight the book's loyal legion of fans around the world.… (more)

LibraryThing member stuzle
I can't even tell you how many times I read this book when I was young. Something about it absolutely fascinated me---a young couple adopts many, many children of many nationalities. I think the little details the author included are what stayed with me most over the years---how once they were very hungry and had to eat a can of rattlesnake meat, how they were given a Christmas present of blocks with water and things floating in the water inside (I wanted one of those!), how someone assumed their Hispanic daughter would like chili powder on everything---so many details I can still recall vividly!… (more)
5 more
LibraryThing member briannad84
Such a terrific book!!! Was very surpised to read about how this family adopted so many children from other ethnic backgrounds, especially in that time in history. Am very curious to hear what happened to them all and how they turned out!
LibraryThing member picardyrose
I didn't know when I read this book in college that I would someday be an adoptive mother, but when the time came, I had the Dosses' happy story for comfort and encouragement.
LibraryThing member homeschoolmimzi
I happened upon a YouTube video recently, of this couple on Groucho Marx's You Bet Your Life and I was intrigued by the woman, Helen Doss, the author of this book. She and her husband were on Marx's show and when they were asked how old their children were, she hesitated a moment, b/c she had 12 children, all adopted and many were the same ages. She and her husband Carl were mavericks in their day, adopting mixed race children during the postwar 40's and 50's, when most orphanages wouldn't allow it.
I looked her up then, and saw she'd written a book about their experience adopting.

This was a fascinating read, not just b/c of her unique experience of adopting so many kids, but b/c of her down home style of writing. Doss shares little anecdotes of the children's conversations, along with comments made by neighbors and her and her husband's own insights and fears, and the result is a fast, easy interesting read.… (more)
LibraryThing member kendallone
I loved this book as a child. I read it multiple times. I especially remember the section about the Japanese children that they fostered during WWII.
LibraryThing member sorchah
So good! I've read this book so much that the cover fell off and had to buy a new (well, to me) copy. I was so excited when I found the second one!