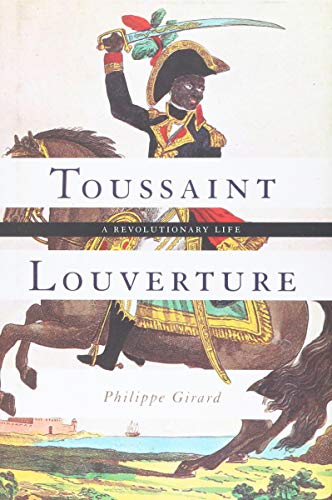 Toussaint Louverture's life was one of hardship, triumph, and contradiction. Born into bondage in Saint-Domingue (present-day Haiti), the richest colony in the Western Hemisphere, he witnessed first-hand the torture of the enslaved population. Yet he managed to secure his freedom and establish himself as a small-scale planter. He even purchased slaves of his own.

In Toussaint Louverture, Philippe Girard reveals the dramatic story of how Louverture transformed himself from lowly freedman to revolutionary hero. In 1791, the unassuming Louverture masterminded the only successful slave revolt in history. By 1801, he was general and governor of Saint-Domingue, and an international statesman who forged treaties with Britain, France, Spain, and the United States-empires that feared the effect his example would have on their slave regimes. Louveture's ascendency was short-lived, however. In 1802, he was exiled to France, dying soon after as one of the most famous men in the world, variously feared and celebrated as the "Black Napoleon."

As Girard shows, in life Louverture was not an idealist, but an ambitious pragmatist. He strove not only for abolition and independence, but to build Saint-Domingue's economic might and elevate his own social standing. He helped free Saint-Domingue's slaves yet immediately restricted their rights in the interests of protecting the island's sugar production. He warded off French invasions but embraced the cultural model of the French gentility.

In death, Louverture quickly passed into legend, his memory inspiring abolitionist, black nationalist, and anti-colonialist movements well into the 20th century. Deeply researched and bracingly original, Toussaint Louverture is the definitive biography of one of the most influential people of his era, or any other.… (more)

"Toussaint Louverture's life was one of hardship, triumph, and contradiction. It began on Saint-Domingue, the richest colony in the Western Hemisphere, where he witnessed first-hand the torture of the enslaved population. Yet he managed to earn his freedom and establish himself as a small-scale planter. He even purchased slaves of his own. In Toussaint Louverture, Philippe Girard tells the incredible tale of how Louverture transformed himself from lowly freedman to revolutionary hero. Working as a coachman for his wealthy, white owners, Louverture traveled across Saint-Domingue, building a network among slaves and free blacks that would form the basis of the slave revolt he engineered in 1791. What followed was a decade of unprecedented bloodletting: about 200,000 people in the colony of Saint-Domingue were killed in battle or murdered. By 1801, Louverture was general and governor of the colony, now called Haiti. But his lifelong quest to be accepted as a member of the French colonial elite ended in despair: in 1802, on Napoleon's orders, he was exiled to France, where he spent the last year of his life in a prison cell. Ten years in the making, Toussaint Louverture is based on extensive archival research in France, Britain, Spain, the United States, and the Caribbean. The book contains many revelations about Louverture's life, from a previously unknown first marriage to the circumstances of his manumission, his exact role in the outbreak of the 1791 Haitian slave revolt, his actions as governor of France's richest colony, and the tragic nature of his death."--Provided by publisher.… (more)