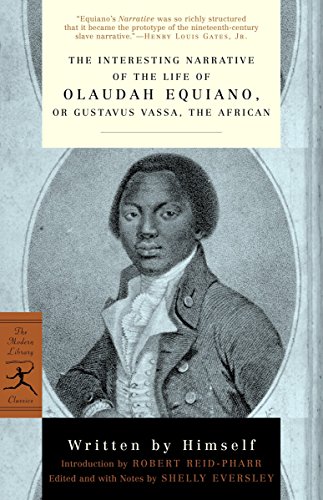 The Interesting Narrative of the Life of Olaudah Equiano: or, Gustavus Vassa, the African (Modern Library Classics)

The Interesting Narrative of the Life of Olaudah Equiano, Or Gustavus Vassa, The African, first published in 1789 in London, is the autobiography of Olaudah Equiano. The narrative is argued to represent a variety of styles, such as a slavery narrative, travel narrative, and spiritual narrative. The book describes Equiano's time spent in enslavement, and documents his attempts at becoming an independent man through his study of the Bible, and his eventual success in gaining his own freedom and in business thereafter.… (more)

The Interesting Narrative of the Life of Olaudah Equiano or Gustavus Vassa, the African. Written by Himselfwas the first work that influenced the nineteenth-century genre of slave narrative autobiographies. Written and published by Equiano, a former slave, it became a prototype for those that followed. Kidnapped in Africa as a child, Equiano was transported to the Caribbean and then to Virginia, bought by a Quaker shipowner, and placed in service at sea. Aboard various American and British ships, he sailed throughout the world, and he continued to do so after having purchased his freedom in 1766. Once settled in London, he fought tirelessly to end slavery. This edition of Equiano's Narrativeplaces the text in the center of abolitionist activity in the late eighteenth century. Equiano knew many of the leading abolitionist figures of his time, and this edition allows readers to trace the common ideas and cross-influences in the works of the political and literary figures who fought for the end of slavery in America and England. The original 1789 text of the narrative has been used for the Broadview edition with Equiano's subsequent emendations included in the appendices.… (more)

I would also like to mention that I think that Olaudah Equiano was not a great poet. Sorry, but the long poem he included towards the end was just too straightforward and not poetic enough.

But there were portions of this book that were definitely much better than the others. Of course, in this case “better” does not mean “enjoyable”. The descriptions he gives of slavery in the West Indies are particularly heart-breaking. But it is in these sections that the real strength of the book reveals itself.

I think the first strength is that it’s realistic. I discussed this way back when I first starting reading this for my American Lit class and I was comparing it to Oroonoko. Everything he writes has the ring of authenticity to it. He’s telling the absolute truth, he knows what he’s talking about, and he makes both of these things clear from the start. Being able to trust the author really is instrumental in being able to take anything out of this first-hand account.

The second strength is the perspective. Of course his position as a former slave provides an inside perspective, a perspective from the point of view of a victim rather than an aggressor, but it’s about more than that as well. What I really noticed is that it’s not at all like reading a history book. Olaudah Equiano wrote about slavery in a time period when it still exists. He had no idea what the future will be like, and he would never have been able to guess what my perspective would be, reading this over 200 years later. He’s firmly placed within his time, and that makes it seem so much more real. He sees the problem of slavery as a very complex one. He wants it to be eliminated, and we see him trying a variety of approaches towards that end in the way of persuasion as he’s writing.

As I was reading some of his arguments against slavery, I found it very easy to compare the way that he was approaching the discussion to the way that we discuss important issues of our own day. Someday we might look back on the very things we’re arguing about right now and say “Oh, of course we should have done this” or “Of course that person was right”, but right now we are in the thick of it, just like he was. It’s interesting to consider.

So it was kind of boring, but, overall, it was worth it.… (more)
LibraryThing member akblanchard
By his own account, former slave Olaudah Equiano (known in life by the slave name Gustavus Vassa; born c. 1745) was an exemplary success. Kidnapped from his native West Africa as an eleven-year-old, he endured the horrific Middle Passage. He made himself indispensable to several owners, until he was finally able to purchase his own freedom in 1766. Blessed with an entrepreneurial spirit and an unshakable belief that he was especially favored by God, Olaudah navigated several layers of society in the West Indies and England, and even sailed to Greenland as part of an Arctic expedition. During one period of his life, he was even involved in the slave trade, but eventually he became known as an early abolitionist. He married a British woman and had two children with her before passing away in 1797.

The Interesting Narrative is, well, interesting as a historical document, but I have to admit I found Olaudah rather insufferable. I found this passage, from Chapter 9, remarkable (it also gives an idea of Olaudah's writing style): "With a light heart I bade Montserrat farewell, and never had my feet on it since; and with it I bade adieu to the sound of the cruel whip, and all other dreadful instruments of torture; adieu to the offensive sight of the violated chastity of the sable females, which has too often accosted my eyes; adieu to oppressions (although to me less severe than most of my countrymen); and adieu to the angry howling, dashing surfs. I wished for a grateful and thankful heart to praise the Lord God on high for all his mercies!" As long as he doesn't have to see bad things happening, he's ok about it.

I don't recommend this book to the casual reader.… (more)
Fewer

The Classic Slave Narratives by Henry Louis Gates
Africa and Africans in the Making of the Atlantic World, 1400-1800 (Studies in Comparative World History) by John Thornton