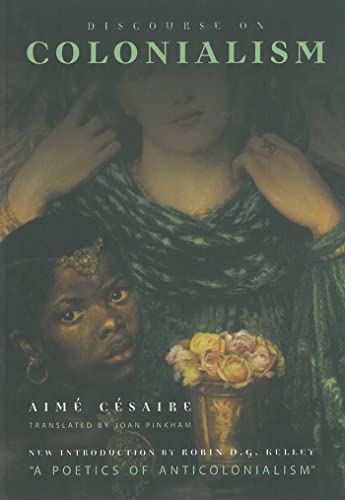 "Césaire's essay stands as an important document in the development ofthird world consciousness--a process in which [he] played a prominentrole." --Library Journal This classic work, firstpublished in France in 1955, profoundly influenced the generation ofscholars and activists at the forefront of liberation struggles inAfrica, Latin America, and the Caribbean. Nearly twenty years later,when published for the first time in English, Discourse on Colonialisminspired a new generation engaged in the Civil Rights, Black Power, andanti-war movements and has sold more than 75,000 copies to date. Aimé Césaire eloquently describes the brutal impact of capitalism andcolonialism on both the colonizer and colonized, exposing thecontradictions and hypocrisy implicit in western notions of "progress"and "civilization" upon encountering the "savage," "uncultured," or"primitive." Here, Césaire reaffirms African values, identity, andculture, and their relevance, reminding us that "the relationshipbetween consciousness and reality are extremely complex. . . . It isequally necessary to decolonize our minds, our inner life, at the sametime that we decolonize society." An interview with Césaire by the poetRené Depestre is also included.… (more)

LibraryThing member HadriantheBlind
An angry snarl of resentment and righteous anger, an indictment of centuries of crimes. It hides under the rather innocuous title 'Discourse of Colonialism', but instead might be appropriate 'Damn you and damn your hypocrisy and hate that led to hundreds of years of atrocities', or something like that.

The book moves from condemnation of wars and injustice, to attacks on now-obscure colonial theorists and 'racialists'. Cesaire makes the bold statement that Nazism is so infamous in Europe because it committed the same atrocities that the Europeans did to other, non-white nations. Slavery, mass extermination, economic exploitation, racial/social engineering, and so forth.

Cesaire does stray into a few grey areas, though. He cites the Soviet Union as a possible source of post-colonial liberation. That state is just imperialism with a new coat of paint. He also does make a few wrong statements which modern anthropology has corrected, but he'd likely be fine with that. In fact, he'd be proud to see the advances in some of these fields.

These little nitpicks do not detract from the overall strength of his feeling. The book itself is not without flaws, but it helped to spark a movement, of peoples rising up and a radical change in intellectual discourse. That alone gives it a place in history.… (more)
1 more
LibraryThing member stillatim
Imagine if Thomas Bernhard had had personal injustice to complain about, instead of poor health: you'd get this book. I'm not sure the thinking is all that coherent, but the indignation is glorious.
Fewer