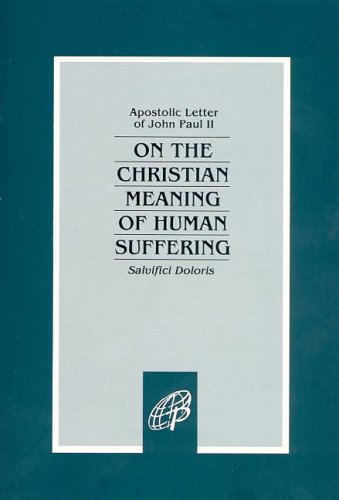 On The Christian Meaning Of Human Suffering: Salvifici Doloris

Salvifici Doloris is widely considered to contain some of John Paul II's best writing. In it he tackled one of humankind's most difficult questions, is there a meaning to suffering? Written in 1984 it was the first systematic reflection on the Church's teaching regarding the Christian meaning of human suffering. There are three central themes explored in Salvifici Doloris: The creative value of suffering: in that if God has permitted this relationship between life, suffering, death and resurrection, there must be a deeper meaning to it than simply the fragility of humanity. Suffering seems to belong to man's transcendence: it is one of those points in which man is in a certain sense destined to go beyond himself, and he is called to this in a mysterious way. The salvific value of suffering: because the weaknesses of all human sufferings are capable of being infused with the same power of God manifested in Christ's Cross. And the Christian vocation in moments of suffering: It is a vocation. Christ does not explain in the abstract the reasons for suffering, but before all else he says: Follow me! Come! Take part through your suffering in this work of saving the world, a salvation achieved through my suffering!… (more)

Sometimes it is a good idea to take a step away from our work, to call a time out, and to take some stock of what we are doing in our lives. This is true for whatever our vocation is, or whatever our profession. In my case, I recommend this letter from Pope John Paul II as a good aide for doctors to use. Reading it has reminded me of the reasons why I chose medicine as a career so many years ago. It also will, hopefully, make me treat my patients as if I were caring for Our Lord instead of Yet Another Patient with An Abscess Somewhere That Needs To Be Drained. Pope John Paul II makes the point that those who care for the sick are like the Good Samaritan, and the the good we do for others in our work is as if we were doing it for Him(whatsoever you do….etc.).
It is also a good idea to remember that our livelihood, for all specialties, is made possible by the sorrow and pain of others: fallout from the Fall of Adam.
Pope John Paul II published this letter in February 1984, approximately two and a half years after he was shot. My guess is that this letter was inspired by his experience as a patient. George Weigel’s book, Witness to Hope covers this part of his pontificate very well. Pope John Paul II seemed to be very active in the decision making process of his medical care.
I could go on for a while, trying to review this Apostolic Letter, but your time would be better spent reading the document.… (more)
Fewer