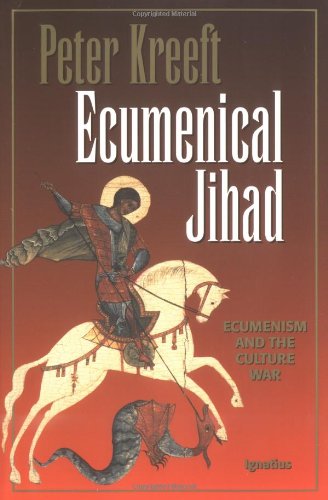 "Juxtaposing "ecumenism" and "jihad," two words that many would consider strange and at odds with one another, Peter Kreeft argues that we need to change our current categories and alignments. We need to realize that we are at war and that the sides have changed radically. Docu-menting the spiritual and moral decay that has taken hold of modern society, Kreeft issues a wake-up call to all God-fearing Christians, Jews, and Muslims to unite together in a "religious war" against the common enemy of godless secular humanism, materialism, and immorality. "Be forewarned. This book pricks prejudices, jostles assumptions, and can do permanent harm to complacent Christianity. Definitely not recommended for people who are unprepared for a rollickingly adventurous journey into truths that might change them forever. Don't say you were not warned." - Fr. Richard John Neuhaus"--… (more)