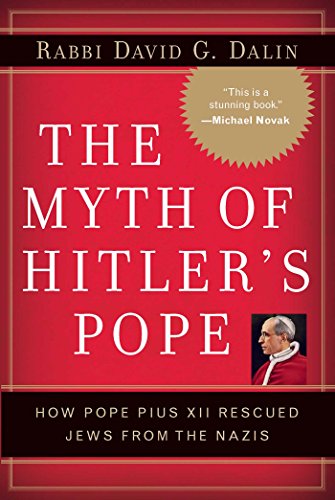 The Myth of Hitler's Pope: Pope Pius XII And His Secret War Against Nazi Germany

"Was Pope Pius XII secretly in league with Adolf Hitler? No, says Rabbi David G. Dalin - but there was a cleric in league with Hitler: the grand mufti of Jerusalem, Hajj Amin al-Husseini. As Pope Pius XII worked to save Jews from the Nazis, the grand mufti became Hitler's staunch ally and a promoter of the Holocaust, with a legacy that feeds radical Islam today." "In this shocking and thoroughly documented book, Rabbi Dalin explodes the myth of Hitler's pope and condemns the myth-makers for not only rewriting history, but for denying the testimony of Holocaust survivors, hijacking the Holocaust for unseemly political ends, and ignoring the real threat to the Jewish people."--BOOK JACKET.

LibraryThing member Oreillynsf
A great book to read in conjunction with Hitler's Pope. Whatever your view on the topic, the book is well written and well documented. After reading both books, I think that both authors make a strong case for their POV, and that each provides ample evidence for his perspective.

this book is based more on testimony from individuals, whereas Hitler's Pope is more arms length review of documents, speeches, and other testimony.
But in any case, it's a good read, and the writer makes a strong case that calling him Hitler's Pope was rather sensationalistic.… (more)
2 more
LibraryThing member judithrs
The Myth of Hitler’s Poe: How Pope Pius XII Rescued Jews from the Nazis. Rabbi David G. Dalin. 2005. I think I started this book last fall and put it aside, but after reading In the Garden of Beasts, When God Looked the Other Way, and Shallow Graves in Siberia, I decided to finish it. Dalin wrote the book in response to several anti-Catholic and anti Pope Pius XII books notably James Carroll’s Constantine’s Sword, Gary Will’s Papal Sin, and John Cornwell’s Hitler’s Pope. The most interesting thing to note about the authors of this book is that they are extremely angry with the church and they are using Pius XII’s conduct to attack the church. Dalin leans the other way and makes the case that the church did everything it could during the war. I feel like the truth is somewhere in the middle. I wish James Hitchcock had gone into more depth about it in his history but he didn’t. Dalin also devotes an entire chapter to connection between Hitler and the devotees of radical Islam and the roots of modern anti-Semitism… (more)
LibraryThing member fulner
I don't feel this book was a good as it could have been. It suffers from the same as films like "Farenhype 9/11" in that they are released far too quickly, primarily to challenge some incorrect "truthes" presented by a more popular work. Much of "The Myth of Hitlers' Pope" is almost unusable without having read John Cornwell's "Hitler's Pope"

That being said what is there appears to be well documented and properly calls out the errors in the more popular work. Our author David Dalin is a Conservative Rabbi. And I do mean Conservative with a Capital C. He probably thinks folks who vote Democrat can't be true believers, with chapters like "The Liberal Medias Lies about the Pope past and present" BUt I digress.

Dalin interviews suriveros of the holocaust who were able to make it through the work of the Church. Some became Catholic after the war (technically during as they were baptized so to prove they weren't Jewish) and some returned to the faith of their fathers when it was safe to do so. He examines the writings of Pope Pius XII in light of the situation at the time. I agree with his conclusion that as a "world leader" in the middle of fascist Europe, he did absolutely everything he could, even when toward the end of the War Hitler wanted him killed. Dalin seems to claim that Cornwell's biggest argument for saying Pius was a Nazi collaborator is because he didn't do enough. If this is true it is a very bad argument. What were American liberals doing during the rise of Hitler? Some where pinning for war, some were fighting against war and claiming Americans should stay out of Europeans' business, and some just wanted to punch Nazi's with no real end game in sight. Really not that different than now. The best it has is reminded me that The Holy Father is still a human, and still primarily has to work within the context of the time he is alive.

If you are interested probably worth reading, though by now their may be better edited works available.… (more)
Fewer