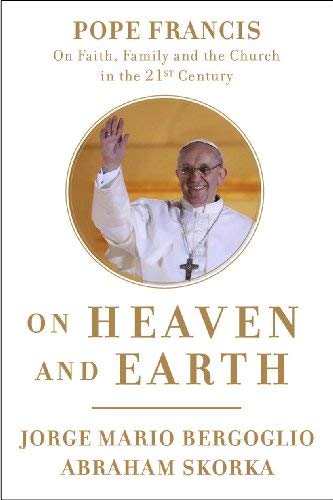 On Heaven and Earth: Pope Francis on Faith, Family, and the Church in the Twenty-First Century

On Heaven and Earth: Pope Francis on Faith, Family, and the Church in the Twenty-First Century by Jorge Mario Bergoglio (Hardcover)

For years Cardinal Jorge Mario Bergoglio, archbishop of Argentina-- now Pope Francis-- and Rabbi Abraham Skorka were tenacious promoters of interreligious dialogues on faith and reason. They both sought to build bridges among Catholicism, Judaism, and the world at large. This work, originally published in Argentina in 2010, brings together a series of these conversations where both men talked about various theological and worldly issues, including God, fundamentalism, atheism, abortion, homosexuality, euthanasia, same-sex marriage, and globalization.

I really appreciate the translation and publication of these candid conversations. They not only offer wonderful insights into our current Pope and his Rabbi friend but also a welcome glimpse of what interfaith dialogue should be. I was deeply touched by their profound explorations and hope to see more unity among God's people.… (more)
1 more
LibraryThing member fulner
This audio book was not very good. It may have been poorly translated from Spanish, but I am uncertain.

It is basically just a conversation between then a Cardinal from Burnouses Ares Argentina (now Pope Francis) and an Argentinian Rabbi. And by basically I mean completely. No additional information, not even a "He said '...' and then he said '...'...." The two readers have voices that are not internally dissimilar which makes following which character is speaking difficult.

The first several discs were a whole lot of really non-important stuff. Don't kill people. Abortion is bad. Don't hate the would be mother, hate the murderous "doctor" etc.

One thing that is clear, is that Pope Francis is not the "most Progressive Pope in history" that the liberal media tries to show us. Such lines as "I disagree every child deserves the right to a female mother and a male father" are far from the 'guy to bring homosexuals to Catholicism' that MSNBC tries to proclaim.

The most interesting part was the fairly anarchist view point that the would-be pontiff declares on some political aspects such as voting saying that even though voting is compulsory in Argentina the last time he voted was in the election for Raúl Alfonsín which would have been 1973 saying that it isn't worth the effort necessary to vote.

All in all if this type of thing is something that you would be interested I recommend getting the dead tree and leave the CD Player alone for this one. If you want to know the Pontif better, there are likely better choices you can make to do so.… (more)
Fewer