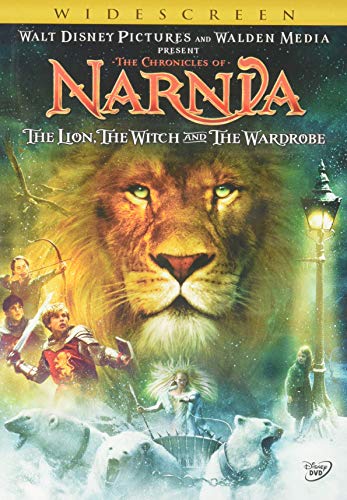 The Chronicles of Narnia: The Lion, the Witch and the Wardrobe [PG]

Lucy Pevenise, along with her older brothers Edmund and Peter, and her older sister, Susan, are in London during the initial bombing raids of WW II. Like many families, their parents decide to send them to the country for safer keeping. Peter, the oldest, is told to watch over the children and make sure they stay safe. This simple request will test Peter's ability to protect his siblings, especially after Lucy discovers an amazing secret. The children decide to play hide-and-seek, and during the game Lucy discovers a mysterious wardrobe. She tucks herself inside and backs to the rear of the cabinet, there she discovers herself in an entirely different world. The place is called Narnia, and it's been locked in winter for over 100 years by someone known as "The White Witch." Lucy rushes back to tell her brothers and sister, but they don't believe her. That is until they all get into the wardrobe one day and find out she's been telling the truth. Soon a prophecy is revealed. It is said that when Aslan returns, two daughters of Eve and two sons of Adam will come back and reclaim the four thrones of Narnia.… (more)

Prepare to enter another world when Walt Disney Pictures and Walden Media present C. S. Lewis' timeless and beloved adventure. With the stunningly realistic special effects, you'll experience the exploits of Lucy, Edmund, Susan and Peter, four siblings who find the world of Narnia through a magical wardrobe while playing a game of "hide-and-seek" at the country estate of a mysterious professor. Once there, the children discover a charming, once peaceful land inhabited by talking beasts, dwarfs, fauns, centaurs and faints that has been turned into a world of eternal winter by the evil White Witch, Jadis. Aided by the wise and magnificent lion Aslan, the children lead Narnia into a spectacular, climactic battle to be free of the Witch's glacial powers forever! "Spectacular epic film-making fills the screen and your heart." --Joel Siegel, Good Morning America

The Chronicles of Narnia [films] (1)

LibraryThing member dvincent
VERY GOOD, BUT TOO MUCH LIKE LORD OF THE RINGS!
5 more
LibraryThing member worldsedge
Overall enjoyable, but the f/x seemed a bit thin at points, as when Lucy and Susan were riding on Aslan's back. The Christian theme was played down, which to my eyes was all to the good. The actress who played the White Witch was the only real standout.
LibraryThing member QKmatey
Aslan is the king of narnia, the wisest of the land and a lion king. this story is set in a secret world behind a closet of a house.
i think this story is good for advanced readers who like a lot of adventures and sword age stuff.
LibraryThing member scsaglib
Lucy, Edmund, Susan and Peter stumble through an old Wardrobe found in the home they were went to for refuge during the bombing of London during WWII. On the other side they find a fascinating world where the animals talk, and it is always winter but never Christmas due to the domination of an evil queen. They fulfill an old prophecy where four human children assist Aslan the Lion in overcoming the queen and restoring the kingdom to its rightful stage. Very definite allegory on the redemption theme of the New Testament, with Aslan being a Christ like figure, who gives his own life for the crimes of others thus defeating the power of the evil witch queen, symbolic of the devil.… (more)
LibraryThing member ninetythree
I love this series and recommend it to everyone! Children enter a magical world where time goes by at a different speed and animals talk and sing. Those of us who look for it can see thinly veiled references to Jesus, creation, death, resurrection, and judgement. Beautiful, moving, and worth reading again and again.
LibraryThing member BookloverA
I enjoyed the book but it was somewhat different from the movie version
Fewer