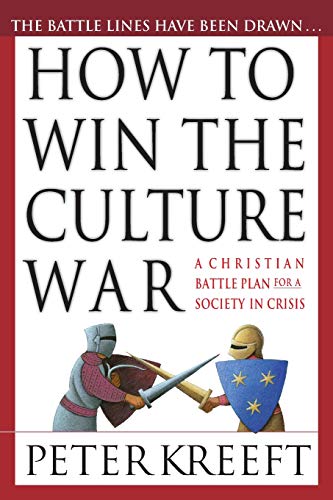 How to Win the Culture War: A Christian Battle Plan for a Society in Crisis

The battle lines have been drawn. Many Christians have fallen into the trap of proclaiming "Peace! Peace!" when there is no peace. Hiding their eyes from the pressing issues of the day, they believe that resistance to the prevailing culture is useless. At the same time, other Christians have been too quick to declare war, mistaking battlefield casualties as enemies rather than victims. In How to Win the Culture War Peter Kreeft issues a rousing call to arms. Christians must understand the true nature of the culture war--a war between the culture of life and the culture of death. Kreeft identifies the real enemies facing the church today and maps out key battlefields. He then issues a strategy for engagement and equips Christians with the weapons needed for a successful campaign.Above all, Kreeft assures us that the war can be won--in fact, it will be won. For those who hope in Christ, victory is assured, because good triumphs over evil and life conquers death. Love never gives up. Neither must we.… (more)

LibraryThing member MusicMom41
This was my “light reading” while we at the retreat last weekend. Kreeft uses humor and a light touch to help Christians step up to the plate and confront the cultural crisis that faces our world today—just as we have had to stand up in every era.