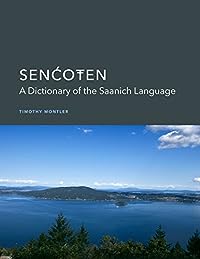 SENĆOŦEN: a dictionary of the Saanich language

The SENĆOŦEN language historically has been spoken on the Saanich Peninsula of southern Vancouver Island and islands in the Strait of Georgia, today divided by the US-Canada border. SENĆOŦEN--also known as Saanich--is now the first language of fewer than ten people, as English has replaced it in everyday use. However, because of revitalization efforts that began in the 1970s with David Elliott Sr., who developed a unique SENĆOŦEN writing system, a large and growing number of people are learning to speak it. SENĆOŦEN is increasingly being used in both ceremonial and casual settings and, thanks to the W̱SÁNEĆ School Board, classes in the language are taught at all levels, with an immersion curriculum also offered. This volume is the first complete SENĆOŦEN-English dictionary and also includes a brief introduction to the language and English-SENĆOŦEN, affix, and root indexes. SENĆOŦEN: A Dictionary of the Saanich Language is based on audio recordings made with twenty-six elders, all native speakers. Their words, sentences, and stories made this dictionary possible.… (more)