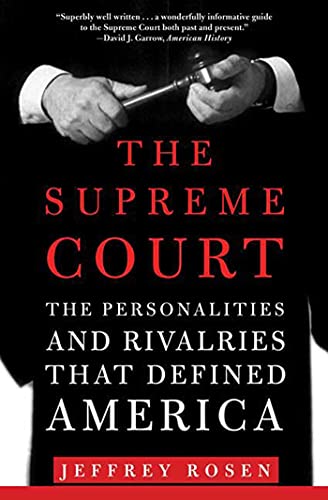 The Supreme Court: The Personalities and Rivalries That Defined America

LibraryThing member Angelic55blonde
This was a great book. It was a fairly short read but it covered the most influential figures on the bench. The author focused on temperament and how each judge's temperament changed and influenced the bench. Each chapter would compare and contrast two judges from the past to present.

I really enjoyed this book. It was interesting and the reader was able to see how individual personalities really did affect how they ruled and the political leanings of the Supreme Court.

I definitely recommend this to anyone who is interested in learning a little bit about the U.S. Supreme Court.… (more)
7 more
LibraryThing member Bonford
A great read. Loved the way Rosen bears down on a select few personalities to back up his thesis. Not a comprehensive history, but it's not intended as such and is all the more readable for it. Thoroughly engaging.
LibraryThing member mzonderm
Here’s an interesting technique of historiography: match up pairs of historical figures, making sure that in each pair you agree with one, and disagree with the other. Then praise the one in almost every way, while denigrating the other. Lastly, declare that the first was on the side of truth and justice, while the other was merely self-serving. Rosen applies this rubric to pairs of Supreme Court Justices through the ages (although, oddly, he pairs John Marshall with Thomas Jefferson, who of course was never on the Court). Rosen is somewhat ambivalent about the actual role of truth and justice on the Court, but he pulls no punches in proclaiming his thesis that a jurist who looks only to his own legacy will, in the end, have a very poor legacy indeed. He holds in high regard those Justices who essentially play along to get along, and work toward consensus and unity on the Court (he includes Marshall, Harlan, Black, and Rehnquist as the more collegial Justices), rather than those Justices who carve their own jurisprudential path and stick to it (Jefferson, Holmes, Douglas, and Scalia get labeled as “ideologues” under this rubric). Rosen’s thesis may seem unbiased, but he doesn’t give us enough of a reason to believe that consensus is a virtue in its own right. As hard as it is to come down on the same side of any issue as Justice Scalia, I find myself wondering if developing a clear and consistent legal theory, and then applying it fairly, isn’t more important than trying to get people to agree with you.

Having dispensed with the basic premise of Rosen’s book, I did quite enjoy the book itself. It’s very well written, and the anecdotes about both current and historical figures are very interesting. Any student of the Court, or even those with a more cursory interest, will find this book a valuable and enjoyable read.… (more)
LibraryThing member bshultz1
This book did a great job of examining the evolution of the court through the pivotal times on the court by displaying the conflict between two justices and expanding it to look at the court as a whole.
LibraryThing member ecw0647
History calms me. No matter how pissed off I get at current affairs or over the idiotic positions of one or another group, as soon as I immerse myself in history I realize that these arguments are nothing new; they’ve all been done before: nullification, states rights, federalism, constitutionalism, etc. Current travails will pass.

Rosen describes major conflicts on the court in terms of personalities. Marshall (the Federalist and convivial) and Jefferson (the Republican ideologue) hated each other. Just how much that motivated Marshall's extremely crafty decision in Marbury v Madison, one can only speculate about.

I had no idea that Jefferson (along with Patrick Henry)had been such a supporter of the idea that individual states should be able to nullify actions of the federal government if they thought them to be unconstitutional. This was, of course, partly his reaction to the Alien and Sedition Acts, enacted by the Federalists to tamp down any form of dissent, especially Republican challenges to Federalist doctrine. Jefferson ( Vice-President at the time) had a real fear he might be deported under the conditions of the Alien Act of 1798. Ultimately, of course, opposition to the Acts laid the groundwork for Jefferson's election to president.

Marbury v Madison is the iconic activist case, yet I found the Yazoo land case scandal that ultimately reached the Supreme Court as Fletcher v Peck to be as interesting. A series of Georgia governors had sold millions of acres of land in what is now Mississippi to land speculators (one company was headed by Patrick Henry) at very cheap prices as the result of bribes. The sales were opposed by the federal government since the land was claimed by Spain. A later Georgia legislature invalidated the contracts. Marshall’s court ruled in 1810 that even though the contracts were the result of fraudulent actions, the state could not retroactively invalidate a contract. This was the first time the court had invalidated a state legislative action. While it did lay the groundwork for a stable economic system, it certainly does leave a bad taste in the mouth.

Rosen dismantles Holmes’s sterling liberal reputation (in his defense toward the end of his life, he moved toward support for civil liberties at the expense of his judicial restraint philosophy) and shows that it was Harlan, the southern former slave owner who consistently came to the defense of the 13th-15th amendments in support of basic rights for former slaves. Holmes, especially in the Giles v Harris case (in shades of Bush v Gore), for example argued the Supreme Court had little right to overrule local legislatures, even when they trampled on the basic rights of citizens. Harlan and Holmes provide a good example of current conflicts on the court: Harlan was the textualist (which he, ironically the former slave owner, to protect the rights of blacks) and Holmes the pragmatist who said the law was what judges decided it was.

He does a nice job comparing the judicial philosophies of the justices. Surprisingly, he considers Rehnquist to be one of the more successful Chief Justices of the 20th century because he tempered his conservatism with a pragmatic grounding in respect for tradition. (Current chief justice Roberts served as a Rehnquist clerk.) Scalia, on the other hand, even while his textual originalism can be compared to Hugo Black's, considers any form of disagreement with him apostasy and he describes the decisions he dislikes as leading to apocalyptic results. Rosen makes a good case that Scalia and Thomas (perhaps now joined by Alito) are the most activist judges in decades for their willingness to overturn established precedent and legislative mandates they find distasteful. He also notes that Scalia ignored his own advice that judges should refrain from making themselves into public figures.

In an interview with Rosen, Roberts expressed concern that the court's public good will was eroding and that an important role for every chief justice is to avoid the appearance of political and partisan divide. I suspect the media will continue to make this effort very difficult. In term ending in 2014, the court decided 72 cases. Of those, fully 2/3 were unanimous. Also amazing was that only 14 percent of the court’s decisions were 5-4, with just four of those 10 splits along the liberal-conservative divide. I would argue that reveals a substantial element of harmony on the court, yet the media, thriving on conflict, insists on portraying a court bitterly divided. Admittedly, listening to the oral arguments (I listen to all of them), there are more than occasional ripostes and snide comments made, especially between Scalia and Sotomayor.(Scalia skewers Breyer all the time, but he just ignores the barbs. But you also get the feeling that Scalia is playing to the audience and he clearly loves getting laughs. An article by David Garrow led me to a piece by Frederick Schauer in the Harvard Law Review - admittedly written in 1998 -- that suggests the court is far less divided along partisan lines than the media would wish to have us think.)*


*(112 Harv. L. Rev. 84)… (more)
LibraryThing member dickmanikowski
Explores the inner workings of the Supreme Court by comparing the philosophies and decisions of four pairs of justices who served together.
LibraryThing member GoofyOcean110
I actually didn't enjoy reading this book nearly as much as I thought I would. Basically its thesis is that the temperament of the judges winds up influencing the direction of the court. Duh. It's made up of people and people have personalities, temperaments and philosophies which color their world view. The book took a look at pairs of judges often at odds during a number of periods in the courts history, which could have been interesting. Rosen had a hard time trying to cram in the juicy bits about what made the selected judges tick (or personable, entertaining or at least interesting), covering the background of the defining cases at hand (e.g. Board v Brown, Plessy v Ferguson, Roe v Wade, etc) and some sense of the semblance of continuity of the court or some inside look at it all within a reasonable length. It just seemed like a high goal that fell short in my eyes. I finished it, but had a hard time keeping my attention due to some parts with monotonous writing.… (more)
LibraryThing member bshultz1
This book did a great job of examining the evolution of the court through the pivotal times on the court by displaying the conflict between two justices and expanding it to look at the court as a whole.
Fewer

The Brethren: Inside the Supreme Court by Bob Woodward