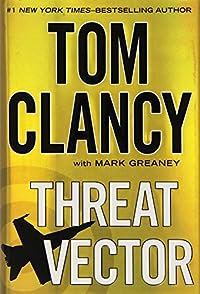 Jack Ryan has only just moved back into the Oval Office when he is faced with a new international threat. An aborted coup in the People's Republic of China has left President Wei Zhen Lin with no choice but to agree with the expansionist policies of General Su Ke Quiang. They have declared the South China Sea a protectorate and are planning an invasion of Taiwan. The Ryan administration is determined to thwart China's ambitions, but the stakes are dangerously high as a new breed of powerful Chinese anti-ship missiles endanger the US Navy's plans to protect the island. Meanwhile, Chinese cyber warfare experts have launched a devastating attack on American infrastructure. It's a new combat arena, but it's every bit as deadly as any that has gone before. Jack Ryan, Jr. and his colleagues at the Campus may be just the wild card that his father needs to stack the deck. There's just one problem: someone knows about the off-the-books intelligence agency and threatens to blow their cover sky high.… (more)

LibraryThing member JanettLeeWawrzyniak
Threat Vector by Tom Clancy with Mark Greaney. President Jack Ryan in the Oval Office; a former CIA agent and his son eliminate threats to interests of the U.S. Someone is working against them and their intelligence agency, threatening to expose them. Chinese experts in cyber-warfare launch an
Show More
attack on the U. S. Chinese attacks escalate to satellites, dog fights and throughout the broad range of technology. There is much telling in narrative and at times it is not advancing the characters or story. Characters thoughts and dialogue could share more of the telling narrative or exposition advancing the plot. With suspenseful action the characters are believable and heroes work against fierce odds. A high tech thriller blending general military knowledge, realism and intricate plotting.
Show Less
15 more
LibraryThing member mainrun
I have heard "yarn" being the same thing as "story," and people call some of those "a good yarn." Reading this book kept me thinking, "man, this is a good yarn." It is great actually. One comment/irksome thing: dates! The story covers several months, maybe even a year. However, the timeline is not
Show More
clearly laid out. Really, just a minor complaint.
Show Less
LibraryThing member MSWallack
Another timely Clancy thriller, this time focusing on the very real threat of cyber warfare. Lots of moving pieces again made this an enjoyable story. Again, the biggest (by far) problem is the notion of the son of the sitting President engaging in the sorts of actions that Jack Ryan, Jr. does in
Show More
this book. The authors do a much better job of trying to reconcile that fact, so the reader just has to sort of suspend some extra disbelief and go with it. But absent that flaw, I was, as always, entertained.
Show Less
LibraryThing member LCOP
Tom Clancy is again ahead of the curve in not only giving us a detailed plausible security threat, but also explaining it so we can understand it. You can completely visualize this happening.

I am an extremely fast reader, but I took my time with this one, about 20 hours spread over 5 days. I needed
Show More
that long to take everything in and overall I really enjoyed this book. I have missed Sr., he is what got me into this series, and it is hard switching over to Jr. or at least it was.

Jr is maturing and becoming smarter. I was 16 when I started reading with Patriot Games and then I read every single book. I became disenfranchised when we got Red Rabbit in 02. Then we got Jr and Dom and it took me awhile to warm up to them, they seemed to young and naive. Now the new had rubbed off and they are good agents. The action was fairly non stop in this, there was something going all the time.

I loved being walked through the cyber element as I am interested in it, but don't know a ton. It was well laid out so you could follow it. I also liked the way all the story lines intersected.

This is a good book and I am looking forward to the next one. I will re-read this, but it is not a FAVORITE of the series. My go to TC books that I re-read all the time are: Patriot Games, Sum of All Fears, Debt of Honor and Executive Orders and Rainbow Six.

Based on the way the characters are developing I think the next one could be a 5 plus star. The last few books have been more plot driven and this one was to a large extent, but there was also some good character development, which are the books I prefer. I hope as Jack Jr gets older his character will be more developed and he will be more interesting.

I think the hardest part for me in this book is to realize the characters I grew up loving are now senior citizens :(. John is repeatedly referred to as old, and you get that impression with SR too. It was kind of depressing. Ding is in his 40's - wow!

If you are a Tom Clancy fan you should like this book. I think this book could be read with out all the back history, although that and all the interlocking relationships make it better, you can still come into it without that. If anything it will make you want to go back and read earlier works.
Show Less
LibraryThing member rufusraider
Threat Vector by Tom Clancy is another very good novel with Jack Ryan as president. The story revolves are cyber terrorism/warfare by the Chinese. Plenty political intrigue and spies to go around. Just like all of his novels, plan for a good block of time to read the book. It is long and difficult
Show More
to put down.
Show Less
LibraryThing member barbgarcia1987
The story continues. I liked it, though it is LONG.
LibraryThing member nursewidener
Would you recommend this audiobook to a friend? If so, why? Yes, this book is easily recommended for any of Clancy's fans. I have enjoyed the next chapter in the Jack Ryan and Jack Ryan Jr. books. I wouldn't recommend this book for anyone who doesn't know any of Clancy's previous book, but instead
Show More
would recommend they start with either the book just before this or at least with "No Remorse" or "Rainbow Six" in order to know some of the back story. What did you like best about this story? I like the way Clancy has taken some of the recent history of our nation and still been able to create another universe in which his characters can blossom without running into issue of political or historical events. By creating a slightly altered universe allows Clancy to bring important events into the story without the story following along with history, i.e. readers already knowing the outcome of what has or will happen in the story because they know what has happened already in real life. Have you listened to any of Lou Diamond Phillips’s other performances before? How does this one compare? I love Lou Diamond Phillips narrating books. I have listened to several and I think he rocks as a narrator. I will pick up and listen to any book not normally in a genre of mine that he narrates because he brings so much to the story beyond the words being spoken. Did you have an extreme reaction to this book? Did it make you laugh or cry? Too many areas to remember - Clancy does a great job of putting in laughter in the middle of his suspense related story.
Show Less
LibraryThing member 06nwingert
Tom Clancy has done it again! Threat Vector is a Clancy thriller, though it's not as good as the "classic" Clancy novels. Jack Ryan, Sr. has become president of the United States and his son, Jack Ryan, Jr., works for an undercover intelligence company, the Campus. The Chinese have begun
Show More
cyberattacks on America and military operations on Twain, and it's up to the Ryans to stop them.
Show Less
LibraryThing member buffalogr
Excellent Clancy book. Conflict with the Chinese in many domains is the book's theme--emphasis on Naval and cyber. I especially liked the cyber aspect but was disappointed that Clancy ignored the Army and Air Force. I know that he's a naval historian, but it appeared he never went joint. Plotting
Show More
and conniving are classic Clancy. Ryan Sr., as POTUS, delivers a potent demarche to the Chinese premier that would never happen in 2016--I was whooping it up upon hearing that. It's good that I listened to the abbreviated version, otherwise, Clancy would describe many boring things, like how electrons run through ships or what kind of soup the Chinese had for dinner. Even at 9+ hours, it could have been distilled some more. Good story that should cause some Pentagon planners some thought.
Show Less
LibraryThing member OscarWilde87
One of the last novels in Tom Clancy's Jack Ryan Series, Threat Vector is about a conflict between the United States and China. The focus of the novel is on cyberwarfare and how easily cyber attacks can tip the scales in a war between two superpowers. While the protagonist of the series and now
Show More
President of the United States Jack Ryan only plays a minor role, his son, Jack Ryan Jr., plays a major part in the novel. Both China and the United States have set up a system of cover agents which cannot directly be linked to the government in case one of the agents is caught spying on other countries or eliminating foreign nationals. In Threat Vector China wants to regain power in the South China Sea and wants to reclaim Taiwan through military action. The United States, however, as an ally of Taiwan, have to interfere with Chinese plans and actions and war seems to be unavoidable. President Jack Ryan has to decide how to cleverly employ his military and covert assets in order to prevent the loss of thousands of lives.

Generally, with Threat Vector you will get everything that you would expect from a Clancy novel. As usual, there is the conflict between two superpowers, the involvement of the Russians, and a lot of background on military tactics and data. To my mind, however, this novel does not quite live up to the quality of former novels in the Jack Ryan series as I found some parts to be quite tedious and just read along to get to more thrilling parts. Still, the topic of cyberwarfare and the consequences of an ever-growing importance of modern technology makes this book quite interesting to read. As always, I think Clancy could have done with less pages. On the whole, 3 stars.
Show Less
LibraryThing member yvonne.sevignykaiser
Another well narrated audio by Lou Diamond Phillips. This is part of the Jack Ryan, Jr series fun read to listen too.
LibraryThing member RistoZ
One more boyish adventure plot. (Fun to read). Fast tempo. Somewhat naive one-eyed political reality view.
LibraryThing member jula.treece
A very scary book!
LibraryThing member BabsW
Fantastic Read!
LibraryThing member Andy_DiMartino
Liked the story immensely. Wish Tom wrote his own books though and what is with the publisher? Are they printing this for grade schoolers? Talk about killing a forest to print a few books. Tighten that typeset up and save 400 pages already would ya.
LibraryThing member HGButchWalker
OK, so I'm a sucker for Jack Ryan novels. Been reading them for 20 years. This one has the scary feel of another Clancy novel that could be prescient in terms of the threat that it details. Good read.
Fewer