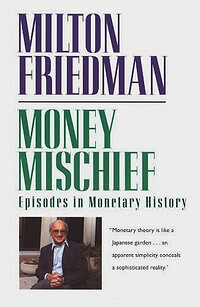 "Nobel Prize-winner Milton Friedman makes clear once and for all that no one is immune from monetary economics--that is, from the effects of its theory and its practices. He demonstrates through historical events the mischief that can result from misunderstanding the monetary system--how, for example, the work of two obscure Scottish chemists destroyed the presidential prospects of William Jennings Bryan and how Franklin D. Roosevelt's decision to appease a few senators from the American West helped communism triumph in China." "In Money Mischief Dr. Friedman discusses the creation of value: from stones to feathers to gold. He outlines the central role of monetary theory and shows how it can act to ignite or deepen inflation, as one instance. He explains, in layman's English, what the present monetary system in the United States--a system without historical precedent--means for your paycheck and savings book as well as for the global economy."--BOOK JACKET.Title Summary field provided by Blackwell North America, Inc. All Rights Reserved… (more)

The Theory of Money and Credit by Ludwig Von Mises
Free to Choose: A Personal Statement by Milton Friedman
Capitalism and Freedom: Fortieth Anniversary Edition by Milton Friedman
Socialism: An Economic and Sociological Analysis by Ludwig Von Mises
Human Action: A Treatise on Economics by Ludwig Von Mises
4 more
Economics and the Public Welfare by Benjamin Anderson
Radicals for Capitalism: A Freewheeling History of the Modern American Libertarian Movement by Brian Doherty
Secrets of the Temple: How the Federal Reserve Runs the Country by William Greider
The Pure Theory of Capital (Collected Works of F. A. Hayek) by F. A. Hayek
Fewer