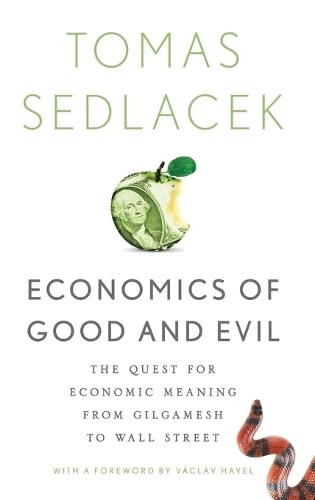 Economics of Good and Evil: The Quest for Economic Meaning from Gilgamesh to Wall Street

Tomas Sedlacek has shaken the study of economics as few ever have. Named one of the "Young Guns" and one of the "five hot minds in economics" by the Yale Economic Review, he serves on the National Economic Council in Prague, where his provocative writing has achieved bestseller status. How hashe done it? By arguing a simple, almost heretical proposition: economics is ultimately about good and evil. In The Economics of Good and Evil, Sedlacek radically rethinks his field, challenging our assumptions about the world. Economics is touted as a science, a value-free mathematical inquiry, he writes, but it's actually a cultural phenomenon, a product of our civilization. It began within philosophy -Adam Smith himself not only wrote The Wealth of Nations, but also The Theory of Moral Sentiments - and economics, as Sedlacek shows, is woven out of history, myth, religion, and ethics. "Even the most sophisticated mathematical model," Sedlacek writes, "is, de facto, a story, a parable, our effortto (rationally) grasp the world around us." Economics not only describes the world, but establishes normative standards, identifying ideal conditions. Science, he claims, is a system of beliefs to which we are committed. To grasp the beliefs underlying economics, he breaks out of the field's confines with a tour de force exploration ofeconomic thinking, broadly defined, over the millennia. He ranges from the epic of Gilgamesh and the Old Testament to the emergence of Christianity, from Descartes and Adam Smith to the consumerism in Fight Club. Throughout, he asks searching meta-economic questions: What is the meaning and thepoint of economics? Can we do ethically all that we can do technically? Does it pay to be good? Placing the wisdom of philosophers and poets over strict mathematical models of human behavior, Sedlacek's groundbreaking work promises to change the way we calculate economic value.… (more)

How Much is Enough?: Money and the Good Life by Robert Skidelsky
Debt: The First 5,000 Years by David Graeber
A Humane Economy: The Social Framework of the Free Market by Wilhelm Röpke
What Money Can't Buy: The Moral Limits of Markets by Michael J. Sandel
Capital in the Twenty First Century by Thomas Piketty
10 more
The Life of Adam Smith by Ian Simpson Ross
The Haves and the Have-Nots: A Brief and Idiosyncratic History of Global Inequality by Branko Milanovic
The Capitalist Revolution: Fifty Propositions About Prosperity, Equality, and Liberty by Peter L. Berger
The Great Escape: Health, Wealth, and the Origins of Inequality by Angus Deaton
The Company of Strangers: A Natural History of Economic Life by Paul Seabright
Capitalism, Socialism, and Democracy by J. A. Schumpeter
Sex, Drugs and Economics: An Unconventional Introduction to Economics by Diane Coyle
The Culture of the New Capitalism by Richard Sennett
The Economics of Enough: How to Run the Economy as If the Future Matters by Diane Coyle
Poor Economics: A Radical Rethinking of the Way to Fight Global Poverty by Abhijit Banerjee
Fewer