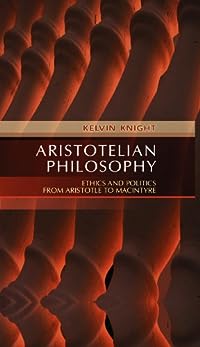 Aristotelian Philosophy: Ethics and Politics from Aristotle to MacIntyre

Aristotle is the most influential philosopher of practice, and Knight's new book explores the continuing importance of Aristotelian philosophy. First, it examines the theoretical bases of what Aristotle said about ethical, political and productive activity. It then traces ideas of practice through such figures as St Paul, Luther, Hegel, Heidegger and recent Aristotelian philosophers, and evaluates Alasdair MacIntyre's contribution. Knight argues that, whereas Aristotle's own thought legitimated oppression, MacIntyre's revision of Aristotelianism separates ethical excellence from social elitism and justifies resistance. With MacIntyre, Aristotelianism becomes revolutionary. MacIntyre's case for the Thomistic Aristotelian tradition originates in his attempt to elaborate a Marxist ethics informed by analytic philosophy. He analyses social practices in teleological terms, opposing them to capitalist institutions and arguing for the cooperative defence of our moral agency. In condensing these ideas, Knight advances a theoretical argument for the reformation of Aristotelianism and an ethical argument for social change.… (more)

Morals and Markets: The Dangerous Balance by Daniel Friedman