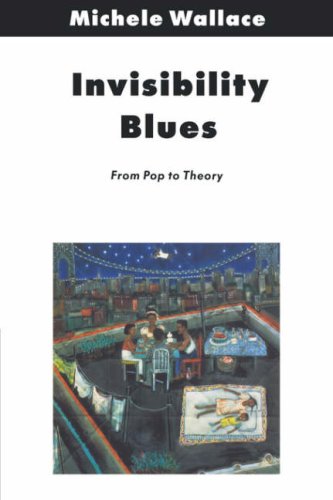 First published in 1990, Michele Wallace's Invisibility Blues is widely regarded as a landmark in the history of black feminism. Wallace's considerations of the black experience in America include recollections of her early life in Harlem; a look at the continued underrepresentation of black voices in politics, media, and culture; and the legacy of such figures as Zora Neale Hurston, Toni Cade Bambara, Toni Morrison, and Alice Walker. Wallace addresses the tensions between race, gender, and society, bringing them into the open with a singular mix of literary virtuosity and scholarly rigor. With an updated introduction, this new edition of Invisibility Blues challenges and informs with the plain-spoken truth that has made it an acknowledged classic.… (more)

Invisibility Blues: From Pop to Theory by Michele Wallace (Paperback)

Black Looks: Race and Representation by Bell Hooks
Black Macho and the Myth of the Superwoman (Feminist Classics) by Michele Wallace
Race-ing Justice, En-Gendering Power: Essays on Anita Hill, Clarence Thomas, and the Construction of Social Reality by Toni Morrison
But Some Of Us Are Brave: All the Women Are White, All the Blacks Are Men: Black Women's Studies by Gloria T. Hull
Home Girls: A Black Feminist Anthology by Barbara Smith
19 more
When and Where I Enter: The Impact of Black Women on Race and Sex In America by Paula Giddings
Talking Back: Thinking Feminist, Thinking Black by bell hooks
How we get free : black feminism and the Combahee River Collective by Keeanga-Yamahtta Taylor
Sisters of the Yam: Black Women and Self-Recovery by bell hooks
Good Neighbors: Gentrifying Diversity in Boston's South End by Sylvie Tissot
Black Feminist Thought: Knowledge, Consciousness, and the Politics of Empowerment (Revised 10th Anniv 2nd Edition) by Patricia Hill Collins
Feminist theory : from margin to center by Bell Hooks
Women, Race, & Class by Angela Y. Davis
In Other Worlds: Essays in Cultural Politics by Gayatri Chakravorty Spivak
Ain't I a Woman: Black Women and Feminism by bell hooks
From #BlackLivesMatter to Black liberation by Keeanga-Yamahtta Taylor
Words of Fire: An Anthology of African-American Feminist Thought by Beverly Guy-Sheftall
Democracy Against Capitalism: Renewing Historical Materialism (Radical Thinkers) by Ellen Meiksins Wood
Fortunes of Feminism: From State-Managed Capitalism to Neoliberal Crisis by Nancy Fraser
Beyond the Pale: White Women, Racism, and History (Feminist Classics) by Vron Ware
The Old is Dying and the New Cannot Be Born by Nancy Fraser
Alchemy of Race and Rights: Diary of a Law Professor by Patricia J. Williams
This Bridge Called My Back, Fourth Edition: Writings by Radical Women of Color by Cherríe Moraga
Peasant-citizen and slave : the foundations of Athenian democracy by Ellen Meiksins Wood
Fewer