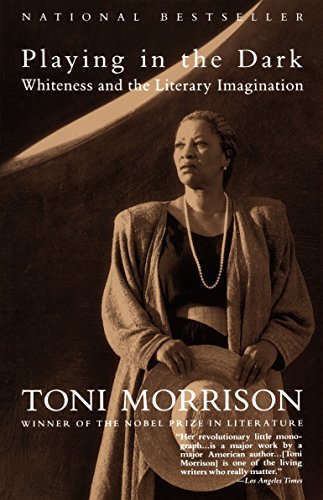 Playing in the dark : whiteness and the literary imagination

The William E. Massey, Sr. Lectures in the History of American Civilization

The Pulitzer Prize-winning author of Beloved and Jazz now gives us a learned, stylish, and immensely persuasive work of literary criticism that promises to change the way we read American literature even as it opens a new chapter in the American dialogue on race. Toni Morrison's brilliant discussions of the "Africanist" presence in the fiction of Poe, Melville, Cather, and Hemingway leads to a dramatic reappraisal of the essential characteristics of our literary tradition. She shows how much the themes of freedom and individualism, manhood and innocence, depended on the existence of a black population that was manifestly unfree--and that came to serve white authors as embodiments of their own fears and desires. Written with the artistic vision that has earned Toni Morrison a pre-eminent place in modern letters, Playing in the Dark will be avidly read by Morrison admirers as well as by students, critics, and scholars of American literature. "By going for the American literary jugular...she places her arguments...at the very heart of contemporary public conversation about what it is to be authentically and originally American. [She] boldly...reimagines and remaps the possibility of America."… (more)

research
In Playing in the Dark, Toni Morrison argues that the "africanist" or black presence is inextricable from American history and therefore American literature, and in order to understand and interpret American literature one should not ignore this crucial presence of the oppressed souls of "sixty million and more" africana people who have died to give birth to America. Further she discusses that " the contemplation of this black presence is central to any understanding of our [American] national literature and should not be permitted to over at the margins of the literary imagination" (Playing 5). Although slavery has an important role in the history of socio-economic structure of all society for many years and slavery of in the New World was not a new phenomenon, but being enslaved due to skin color and race was a new thing altogether. Over centuries it has had a great impact on both oppressed and oppressor that being ignorant to it is almost impossible.

These essays are work but also enlightening if you can manage to fight your way through them. Morrison is so angry and yet she never tells you, never expresses it in any overt way. But she lays it in raw when one compares the balanced tone and the emotion that almost logically is underneath. She writes objectively, ”Black slavery enriched the country's creative possibilities.” - if you aren't cringing, read that again.

From there she just goes on to talk about it. I found myself so uncomfortable reading this, that it became a hard read. If I could have stayed on her tone, it would just been a somewhat interesting, boring and yet very informative read. Yet, that’s not where she is going. She says it, and you think that’s extreme and then eventually you come around to see how much racism plays such a fundamental unconscious and key a roll in American story telling, and how universal it is. It's like the message sinks in and a knife twists in your gut

Think again about Finn in The Force Awakens. Go see any American movie and look at the roll the black characters play - but these servile roles are child’s play. In serious literature blacks play critical roles in balancing main, non-black characters. They provide a critical sense of freedom and independence to those characters. Morrison brings up Henry James, Faulkner, Gertrude Stein, Flannery O’Connor (a bit more respectfully), Mark Twain’s Jim, Nathaniel Hawthorne, Willian Styron, Saul Bellow, Carson McCullers, Edgar Allen Poe, Willa Cather’s Sapphire and the Slave Girl, Melville’s Pip, and she hammers Hemingway. Melville was actually conscious about his racial play, using race in an exploratory and creative manner. Certainly he’s comes across as more modern in his sensibilities in this aspect than all these other authors, and most literature coming out today.

Perhaps I should go back and tone this one down. This reviews seems a bit discouraging. But it is an uncomfortable read, with some uncomfortable revelations that you thought you already knew, but really you only knew a small piece of it.

“As a writer reading, I came to realize the obvious: the subject of the dream is the dreamer. The fabrication of an Africanist persona is reflexive; an extraordinary meditation on the self; a powerful exploration of the fears and desires that reside in the writerly conscious.”… (more)
8 more
LibraryThing member Esmeraldus
Toni Morrison is brilliant, as usual. I can't think of another scholar I admire more.

I've read her criticism and her novels, and loved both, but her criticism is the most lucid and perceptive...I can't get over it. Her gifts as a novelist bring something to her critical work that few have ever matched.

Maybe no one working today. She elevates criticism to poetry:

"For young America, [Romance] had everything: nature as subject matter, a system of symbolism, a thematics of the search for self-valorization and validation--above all, the opportunity to conquer fear imaginatively and to quiet deep insecurities. It offered platforms for moralizing and fabulation, and for the imaginative entertainment of violence, sublime incredibility, and terror--and terror's most significant, overweening ingredient: darkness, with all of the connotative value it awakened."

Highly recommended, highly readable, and very short. You can get this into an afternoon easily, although I didn't, and it deserves re-reading.… (more)
LibraryThing member ltimmel
This is an interesting essay (composed as three lectures) focusing on the tremendous importance of what Morrison calls "Africanism" for the white literary tradition in the US. Morrison writes: "Studies in American Africanism, in my view, should be investigations of the ways in which a nonwhite, Africanist presence and personae have been constructed-- invented-- in the United States, and of the literary uses this fabricated presence has served. In no way do I mean investigation of what might be called racist or nonracist literature, and I take no position, nor do I encourage one, on the quality of a work based on the attitudes of an author or whatever representations are made of some group....My project is to avert the critical gaze from the racial object to the racial subject; from the described and imagined to the describers and imaginers; from the serving to the served."(90)

Still, it is interesting that her discussion of Cather's Sapphira and the Slavegirl reveals that the novel's failures are in some sense enabled by a certain obtuseness in its depiction of and use of its black characters. And repeatedly, Morrison notes the necessity of the presence "Africanism" for depicting freedom, individualism, and difference. Looking at a variety of instances where the protagonist meets an impenetrable field or wall of whiteness, Morrison notes "Whiteness, alone, is mute, meaningless, unfathomable, pointless, frozen, veiled, curtained, dreaded, senseless, implacable. Or so our writers seem to say."(59)… (more)
LibraryThing member Darrol
I am not competent to review this book; I need to read more of the works analyzed.
LibraryThing member omame
interesting and well written. she's got some great ideas that made me wish i had an english class to discuss it with.
LibraryThing member whitewavedarling
Morrison's essays are both striking and gracefully woven. Her powerful ideas about not just American literature and race, but American identity and ideas of freedom, are unique literary explorations well worth reading for anyone interested in American history and identity or literature. As compositions, the essays come together to form questions on statements regarding freedom and identity which are both thought-provoking and frightening. This book is one worth exploring and re-exploring.… (more)
LibraryThing member sparemethecensor
A challenging read, but well worth the time and effort.
LibraryThing member bell7
Three essays on that originated as Toni Morrison's William E. Massey, Sr., Lectures given at Harvard are here in written form, exploring the way in which an "Africanist" persona is contrasted with individualistic whiteness in American literature.

Morrison delivers a challenging read that's just as prescient and timely now as it was when it was printed in 1992. She never calls authors racist, but talks about examples from the works of Poe, Hemingway, Twain and more, and analyzes the way in which race is presented in their works. Her argument that there's a sort of persona that becomes an other, a contrast for protagonists and a fill in for danger or subjugation is especially compelling. My reading was impeded somewhat by not having read the works she was analyzing, and I would want to reread it to get the full impact and mull over her points more. Excellent reading for any student of American literature who would like to think more about how race is written.… (more)
LibraryThing member RandyMetcalfe
Sometimes I wish that all literary critics were obligated to first serve an apprenticeship as great writers of fiction. Surely, like Toni Morrison, they would then be better able to appreciate the practical challenges and choices writers face. And that might make them more sensitive to what those choices reveal. Although she was well taught as a reader, Morrison says that, “books revealed themselves rather differently to me as a writer.” In Playing in the Dark, Morrison turns that writerly attention on the canon of American literature and asks what effect the largely unspoken Africanist presence in America has had on the choices that writers make. The answer is fascinating.

The writing here sometimes explodes in flourishes of enthusiasm, almost poetic. And at times it seems that Morrison is presenting a prolegomena to a future body of criticism, or a platform of work for future students of American literature, rather than critical analysis itself. But when she does turn to specific texts, such as Cather’s Sapphira and the Slave Girl or Hemingway’s To Have and Have Not, her insights are piercing. Her scrutiny of Hemingway’s syntactically awkward locution “saw he had seen” in order to enforce the narrative silence of his black shipmate is a case in point. Morrison’s concern is with the choice made by the writer just there. Perhaps only a serious writer can appreciate the import of such choices.

Morrison says that, “thinking about these matters has challenged me as a writer and as a reader.” It’s the kind of thinking that we could each use more of as readers.… (more)
Fewer