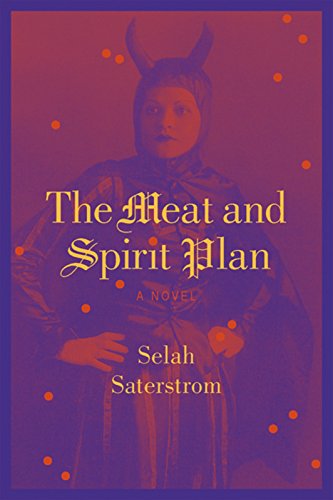 The Meat and Spirit Plan

"Like an experimentally inclined Annie Proulx, Saterstrom tersely renders the effects of social violence on individual lives . . . the effect is shattering and transcendent."--Modern Times Bookstore newsletter In lyric, diamond-cut prose, Selah Saterstrom revisits the mythic, dead-end Southern town of Beau Repose. This time, the story follows a strung-out American teenager influenced by heavy metal, inspired by Ginger Rogers, hell-bent on self-destruction, and more intelligent than anyone around her realizes. She is forced into rehab and private school, and her life, at least on the surface, changes course, eventually leading to theology studies in Scotland. But as the feverish St. Vitus's dance of her adolescence morphs into slow-motion inertia abroad, an illness brings her home again--to face the legacy of pain she left behind and to find a way to become the lead in a dance of her own creation. An heir to William Faulkner and Toni Morrison, Saterstrom soars above the traditional boundaries of the American novel with "exquisite, cut-to-the-quick language" (RaleighNews & Observer) that makes her novels "impossible to put down." Spare, raw, and transcendent, Saterstrom's unflinching examination of modern-day Dixie and contemporary adolescence lights up the dark corners of the American experience. Selah Saterstrom is the author ofThe Pink Institution, a debut novel praised across the country for "letting gusts of fresh, tart air blow into the old halls of Southern Gothic" (The Believer). A Mississippi native, she is currently on the faculty of the University of Denver's Creative Writing Program. Visit her website at www.selahsaterstrom.com.… (more)

The Believer
We listen to the nameless narrator tell us about her misspent youth, bad boys and really bad boys, dead-end kids in the American South: “We are trying to have a picnic but no one knows how.” Our narrator goes to reform school, college, Scotland, somehow for a degree in religion, despair and freedom tangled throughout. Then back to the States for hallucinations or perhaps lucid dreaming.

LibraryThing member NateJordon
I picked this up last night and couldn’t put it down, subconsciously compelled to read this amazing book from cover to cover in one sitting. Using compact, witty, and cathartic vignettes, Saterstrom transports the reader into the heart and mind of the nameless narrator, where the female heroine exposes her darkest secrets as if it’s a ritual, a rite of passage, as we follow her through childhood to early adulthood. The succession of scenes act as snapshots, the flashbulbs exploding in the mind leaving the reader in awe.… (more)
1 more
LibraryThing member Val.Killpack
A wry celebration of disparity

This text embraces the coming-of-age story and takes it into new territory. Growing up is not just about finding the self, but it is about establishing a relationship between the "meat" and the "spirit," or in other words, about resolving the mind/body problem: trying to create a sense of a unified and whole entity, while the body is changing and the mind (spirit) is changing. This text is about process, and to evaluate this process, it steps outside the subject to look through and at the subject, but still from the position of the subject. It is an objective look at subjectivity in first person point-of-view. Perhaps it represents the confusion and disassociation that result from trauma. Coming-of-age is shown here as psychological trauma--and the body/mind separation that results. The subject becomes a witness, removed into a safer place, a place without feeling.

The section titles say something in themselves: "Headbanger's Ball" juxtaposed with "Religious Studies," then "The Slaughterhouses of Glasgow," "Magic Tricks for a Hospital Setting," and "The Life of Ginger Rogers, by Ginger Rogers." Why the heavy-metal chapter titles? Maybe something about the rawness of the narrator's early life experience. And the violence. Clashing against everything, and needing to scream, but being unable to, so doing it vicariously through music. Catharsis. The titles correspond with her action, "I incised some narrow lines into my palms and between my fingers" (43).

The separate passages--the fragmented nature of the form this text is presented to us in--this represents memory. It resembles recollections told to a therapist over a period of time--or a journal written after the fact, maybe.

The "Religious Studies" section illustrates an attempt at college life. She is in a period of seeking, and immersed in an institution. The highly-structured environment may not work for her in a long-term way, but it has opened her into a new awareness, perhaps, at least in some small way.

"The Slaughterhouses of Glasgow" shows her expanding out into a multi-cultural world. A certain violence still pervades this section, but it is not only matter-of-fact, like earlier in the book, but maybe even wry, humorous, or even slightly celebratory of the disparity she again finds herself immersed in. Instead of music, she finds expression in art, and sits in front of it, rather than talk or write her thesis: "Then I sit in front of it when I'm supposed to be at University library writing my research thesis" (143-144). A slaughtered ox that represents so much for her--this metaphor is so colourful.

"Magic Tricks for a Hospital Setting" transitions the narrator into a space of healing. She must look at her problems of metabolising/digesting her past.

"The Life of Ginger Rogers, by Ginger Rogers" projects her experience into a setting of film. She becomes the film star--her only name in the book--and a surreal art film with a multi-cultural cast brings together her experience thus far. This film incorporates everything, such a variety and scope, and it contains the element of acceptance, rather than a pushing away, a clinging to, or an ignoring of experience. This so-called film finds a new language that includes all languages. Ginger Rogers becomes birth, life, old age, sickness, and death. The end.… (more)
Fewer

Bastard Out of Carolina by Dorothy Allison
A Good Man Is Hard to Find and Other Stories by Flannery Oconnor
The Vanishers by Heidi Julavits
The unspeakable : and other subjects of discussion by Meghan Daum
You Too Can Have a Body Like Mine: A Novel by Alexandra Kleeman
6 more
Slouching Towards Bethlehem: Essays by Joan Didion
Swamplandia! (Vintage Contemporaries) by Karen Russell
Treasure Island!!! by Sara Levine
Don't let me be lonely : an American lyric by Claudia Rankine
Why Did I Ever by Mary Robison
Black tickets by Jayne Anne Phillips
Fewer