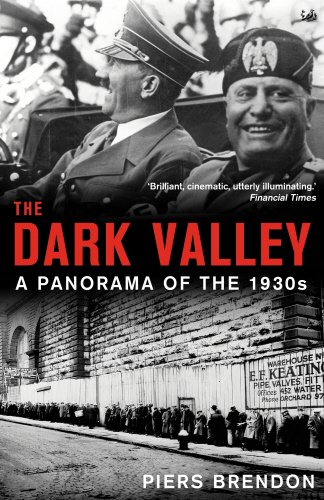 A magisterial, unprecedented overview of the clouded and turbulent years before World War II. It was a decade dominated worldwide by the Great Depression, by unemployment and hardship; a time when human achievement was matched by pervasive fear; when the great neon metaphors of hope that rose up after World War I--Broadway, Piccadilly Circus, the Kurfürstendamm, the Ginza--grew dim both literally and figuratively. It was a decade during which darkness often masqueraded as light--Hitler's abolition of unemployment in Germany; Stalin's plans for progress and social equality in Russia; Mussolini's "revival" of Italy--while governments established and maintained control through brutal physical repression and the more insidious, lasting repressions of truth: sanctioned deception and relentless propaganda. It was a decade during which a diffuse economic and social crisis condensed into a massive political and military storm. Focusing individually on each of the primary staging grounds for history during the 1930s--the United States, Germany, Italy, France, Britain, Japan, Russia and Spain--Piers Brendon traces the particular and diverse experiences of the decade. Political and economic circumstances form the framework of this breathtaking work of scholarship, but it is also the story of people: both of crucial figures--Hitler, Stalin, Mao, Roosevelt, Franco, Chiang Kai-Shek and Mussolini, to name a few--and of a secondary, but no less fascinating, cast of characters, including George Orwell, Leni Riefenstahl and Ernest Hemingway. Brendon vividly conjures the texture and tone of life in places as far-flung as Paris and Kyoto, Vienna and Shanghai, Magnitogorsk in the Ural Mountains and Norris in the Tennessee Valley. He depicts the circumstances of the Ukrainian famine and the American Dust Bowl, the Night of the Long Knives and the conquest of Ethiopia, the bombing of Guernica, the Anschluss and the great Soviet purges. He describes the clothes people wore, the food they ate, the books and newspapers they read, the work they did or lacked, the beliefs they held, the pleasures they enjoyed, the sufferings they endured. The public sphere and the personal realm, the collective lives of nations and the details of individual lives--each element of the book contributes to its brilliant elucidation of the ways in which, during the 1930s, political power obscured knowledge, economic catastrophe darkened understanding and the foundation was laid for the most profound and far-reaching crisis of modern times. The Dark Valley is a revelation of the ten years that set the course for the remainder of the twentieth century.--Publisher description.… (more)

Foreign Affairs Journal
Those who worry about the fragility of today's world order should remember the nightmarish 1930s. In a masterful survey of that troubled decade, Brendon traces the political pathways of the great powers in the throes of economic collapse and social upheaval. This massive book also offers fascinating sketches of democrats and dictators struggling to cope with (or exploit) the enveloping economic misery. But the central drama is the rise of fascism, rooted in national humiliation and nourished by the everyday anger of common citizens. Mussolini's March on Rome in 1921, for example, revealed both fascism's absurdity and its potent possibilities in a world economic crisis. American and British leaders are depicted as practical and determined but lacking a coherent script. Brendon reminds the reader of an old insight: Illiberal politics lurk in the shadow of major economic recession.

LibraryThing member stillatim
Brendon tried to the impossible with this book- there's just no way anyone can squeeze a decade as crazy as the thirties into one book. Given that though, he did a great job of laying out the facts. But don't come to this book expecting explanation. The vast majority of it reads like the work of an immensely talented autodidact historian who has completely lost his ability to follow a thought through an entire paragraph. This is seemingly by design- "this tome," Brendon says, "is a parcel of epitomies," he claims to "accumulate personal minutiae" and conjures up "the contemporary experience... via detail of the clothes people wore, the food they ate, the cigarettes they smoked." All of which is great if you want a 'feeling for the period', but pretty dismal and dull if you want to know *why* something happened. He's obviously capable of explaining the whys of history, as the final chapter on the Nazi-Soviet pact makes clear. I just wish he'd done more of that, and spent less time on the details of Blum's cigarettes, Churchill's dinners, or the endless (and hilarious) follies of prominent Nazis.
As a side note, this somewhat ADD-style of piling up anecdotes also makes the writing less wonderful than it could have been. Brendon's obviously a talented stylist, but it's difficult to appreciate that when every sentence introduces a new epitome, rather than building on previous sentences, every paragraph introduces a new anecdote rather than explaining more fully the previous paragraph, and so on.
… (more)
5 more
LibraryThing member mjs1228
Piers Brendon deserves praise for writing a mostly readable history of the 1930s that covers the major players in World War Two. The focus is decidedly on Europe with Italy, Germany, France and the UK getting detailed coverage, the United States, Japan, the USSR and Spain fill out the rest.

The book is written in an episodic format with each chapter covering a period of time in one country. On occasion this means that one event is covered multiple times in separate chapters – not necessarily a bad thing when it allows a different perspective on the event. It also means that the narrative weaves back and forth through time: the chapter on France might end in 1936 but the next step in Italy starts in 1931. The effect of both is to make each chapter stand on its own but keeps the whole from quite fitting seamlessly together. Though Brendon does try to knit the chapters together by introducing the country covered in the next chapter in the last pages of the previous this tactic feels clunky more often than not. This is not a showstopper, just something to keep in mind.

The chapters on Japan and Italy are especially strong, possibly because so few writers of popular history have given much attention to either country’s experience during the 1930s lately. The chapters on Spain and France are quite good also. Oddly, considering that Brendon is English, the chapters on the UK are surprisingly patchy. The chapters on the United States are, on occasion, a bit odd. Brendon’s take on the Supreme Court was surprisingly ill-informed and his sudden segue into Hollywood was downright bizarre. After paying little attention to culture in general Brendon spends pages essentially complaining about the output of the movie factories. I’m still wondering what the line “Even monsters like Boris Karloff and Shirley Temple did not seem credible” is supposed to mean. Does he mean the characters they played? Boris and Shirley as individuals? Is this a bon mot gone flat? Even more strangely, Brendon keeps referencing Citizen Kane, a great movie but one made in 1940 and released in 1941. Pop culture critiques are not Brendon’s strength.

The subtitle, A Panorama of the 1930s, is apt. This is not a comprehensive history. What Brendon covers and ignores verges on idiosyncratic at times. He’s not trying for completeness but rather to give the reader the feeling of the 1930s: a slow, exorable descent into chaos and ultimately the dark valley of war. The sheer breadth of what the book attempts to cover deserves the attention of any reader interested in the times.… (more)
LibraryThing member JBreedlove
Exactly what I want in a history book. A light shone on a time that I was not as familiar w as I should have been. Well written it fleshed out some of the people, incidents, and failures that led to WWII. We think of this war as inevitable but there were so many other possible outcomes. It explained some of the complexities of the Depression era as well.… (more)
LibraryThing member dasam
Piers Brendon's "panorama" of the years leading up to WWII is intelligent, comprehensive, thoughtful, and frightening. Brendon does not shy from the brutal facts of brutish power, or the newfound abilities of that power to manipulate people through new mass media and technologies. Democracies and dictatorships alike lied with effect, including the most destructive of self-deceits. Well-written snd accessible, The Dark Valley should be in the library of every leader and citizen.… (more)
LibraryThing member Hae-Yu
This book is well-written, but the author repeats the garbage that Stalin had to do what was necessary to pull Russia into the modern era. Otherwise presents interesting information on Mussolini's Italy and interwar France.
LibraryThing member robertmorrow
A comprehensive narrative of the insanity that beset much of the human race in the 1930's, focusing on the seven countries who would become the major belligerents in WWII. While there are passages that could have been dropped, the author does a creditable job describing the fear-driven universe created by the Great Depression and Nationalism.… (more)
Fewer

The Battle for Spain: The Spanish Civil War 1936-1939 by Antony Beevor
The coming of the Third Reich by Richard J. Evans
The Third Reich in power, 1933-1939 by Richard J Evans
1889-1936 : hubris by Ian Kershaw
Hitler, 1936-1945 : nemesis by Ian Kershaw
7 more
The scramble for Africa : white man's conquest of the dark continent from 1876-1912 by Thomas Pakenham
A people's tragedy : the Russian Revolution, 1891-1924 by Orlando Figes
Armageddon : the battle for Germany, 1944-45 by Max Hastings
The Vertigo Years: Europe, 1900-1914 by Philipp Blom
The Spanish Holocaust: Inquisition and Extermination in Twentieth-Century Spain by Paul Preston
The pity of war by Niall Ferguson
Dreadnought : Britain, Germany, and the coming of the great war by Robert K. Massie
Fewer