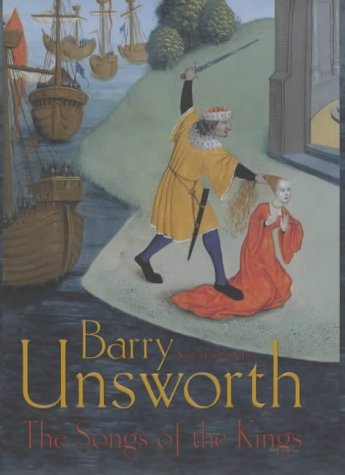 The songs of the kings

"Troy meant one thing only to the men gathered here, as it did to their commanders. Troy was a dream of wealth; and if the wind continued the dream would crumble." As the harsh wind holds the Greek fleet trapped in the straits at Aulis, frustration and political impotence turn into a desire for the blood of a young and innocent woman--blood that will appease the gods and allow the troops to set sail. And when Iphigeneia, Agamemnon's beloved daughter, is brought to the coast under false pretences, and when a knife is fashioned out of the finest and most precious of materials, it looks as if the ships will soon be on their way. But can a father really go to these lengths to secure political victory, and can a daughter willingly give up her life for the worldly ambitions of her father?Throwing off the heroic values we expect of them, Barry Unsworth's mythic characters embrace the political ethos of the twenty-first century and speak in words we recognize as our own. The blowhard Odysseus warns the men to not "marginalize" Agamemnon and to "strike while the bronze is hot." High-sounding principles clash with private motives, and dark comedy ensues. Here is a novel that stands the world on its head.… (more)

LibraryThing member hilllady
A wonderful, bitingly satirical novel about politics, set at the port of Aulis, where, according to The Iliad, the Greek fleet was briefly delayed by an ill-omened wind on their voyage to sack Troy. In Unsworth's telling, both the cause of the wind and the public messaging about it come at the intersection of religious and political maneuvering for power. All the familiar mischief-makers and heroes of Homer's epics are here, all lively enough to have come straight from the DC beltway. Odysseus's manipulation of the media (in the form of the Singer, a blind minstrel from whom all the waiting Greeks get their news) is the funniest take on modern PR that I've seen in a long time. But what makes this story work is the tragedy it tells, of people who, seeing the truth, are too weak to act; or who, once deciding to act, blind themselves to the implications of their actions. Few books have both made me laugh out loud and left me so unsettled by the end. Highly recommended.… (more)
6 more
LibraryThing member mbergman
Once again, Unsworth (Morality Play) proves himself a masterful storyteller, here retelling (or reimagining--I don't know the original well enough to know which) a portion of the story of the Iliad in which Agamemnon is manipulated by such Greek heroes as Odysseus & Achilles into agreeing to sacrifice his daughters to appease the army's sense that he needs to appease the gods who have sent winds that have bottled them up & prevented their advance to Troy. Unsworth makes no effort to avoid anachronisms in his effort to bring home the story's relevance for the modern world, with its themes of manipulating religion for political & militaristic ends, appealing to the sense of patriotism & responsibility of powerful leaders by those for whom those notions are just words used to manipulate for less lofty ends, & other such noble themes.… (more)
LibraryThing member emmakendon
Not as captivating as I thought it was going to be - a nice conceit and quite fun, but maybe I wanted some gods? I had read this before and couldn't remember it, so went to have another read but really couldn't be bothered a second time!
LibraryThing member Stevil2001
I started reading this book without even reading the front cover flap. I mean, maybe I read it when I bought it (on the strength of enjoying Unsworth's Morality Play), but that was three years ago now, so I knew nothing of what to expect. I was mildly disappointed when I started reading and learned it was about the Trojan War-- a grim and gritty Trojan War, with (most of) the supernatural elements removed. Did I really want to read a literary version of Troy? I did read the flap eventually, which promised me that, "Throwing off the heroic values we expect of them, Barry Unsworth's mythic characters embrace the political values of the twenty-first century and speak in words we recognize as our own." I'd be more impressed if Donald Cotton hadn't already done that in 1965 (albeit with the twentieth century, of course).

But once I put all that baggage aside and got on with the story, I enjoyed it quite a lot! The Songs of the Kings isn't about the Trojan War as such, but the bit where the fleet is trapped because of bad winds for ages and they decided to kill Iphigenia to get things underway again. Everyone is going a little stir-crazy with all the wind, and the narrative jumps between a number of different characters, showing us the events from a wide variety of perspectives. Probably my favorite viewpoint character was Odysseus, who is very smart (but thinks he's even smarter) yet makes himself seem foolish in his speech. Calchas, the not-well-favored seer, was another good one, and the stuff from the perspective of Iphigenia herself was great. My favorite side characters were Ajax the Greater and Ajax the Lesser, the double-act of the mentally stunted and the verbally course, who invent the idea of sports competitions with amusing results.

The book, like Morality Play, is preoccupied with storytelling; in this case, it's the kind of stories we tell others and ourselves to justify what we "need" to do. It's impossible to ignore the connections to the war in Afghanistan in a novel released in 2002, but as the book itself demonstrates, they're also timeless concerns. Who controls stories is of the utmost concerns-- there are several scenes of the blind storyteller in the Greek camp, who everyone wants to endorse their perspectives with his stories, and he pushes back as much as he can. (But sometimes, you know, you need to eat.) Ultimately, careful application of storytelling changes the course of the war, as well as several people's lives, in fashions both expected and unexpected. As Iphigenia says, "We are all the victims of stories in one way or another... even if we are not in them, even if we are not born yet."… (more)
LibraryThing member Helenliz
Set during a week just prior to the start of the Trojan war. the Greek army is waiting to embark, but the wind is against them. this is unseasonal, and is causing a great deal of upset, particularly as the mission is supposed to be sanctioned by the gods - how can the gods now withhold their favour? The conflicting opinions on the interpretation of the omens (and the twisting thereof to suit the different agendas) result in a number of schemes that develop a life of their own. Such that the books ends with an innocent being sacrificed to the god, who has objected to the shedding of innocent blood, in order to appease them. No, it makes no sense at all. but it is told lyrically well. This follows on quite nicely from the penelopiad, which i read last month, as that was telling part of this sptry, but from the viewpoint of penelop, Odyseus' wife. here odyseus is one of the schemeers and is most concerned with the songs that will be told by the singers (an early version of worrying about the press). it's the tales of the singers that the stories persist in - the thing is, that the story that's told isn;t always what happened or what is wanted to be told. A good read, and quite an ambiguous story, it leaves a great deal to the reader to make their mind up about.… (more)
LibraryThing member elucubrare
I am much too much of a Homeric purist to really love this, but I didn't completely hate it either.
LibraryThing member riverwillow
This is an interesting, and disturbing, retelling of the events leading up to the sacrifice of Iphigeneia on the eve of the Trojan War. Unsworth depicts Agamemnon as an ineffectual leader of a divided army, trapped on the Aulis Straits by the wind. The priests, and a calculating Odysseus, hold the power here which they use to persuade Agamemnon to sanction his daughter's sacrifice and to convince Iphegeneia of her destiny, all of which has relevance in the modern world.… (more)
Fewer

Morality play by Barry Unsworth
Losing Nelson (Norton Paperback Fiction) by Barry Unsworth
The dream of Scipio by Iain Pears
According to Queeney by Beryl Bainbridge
The Lost Books of the Odyssey: A Novel by Zachary Mason
6 more
The voyage of the Narwhal : a novel by Andrea Barrett
Master Georgie : a novel by Beryl Bainbridge
The green knight by Iris Murdoch
The Penelopiad by Margaret Atwood
Music & Silence by Rose Tremain
The towers of Trebizond by Dame. Rose Macaulay
Fewer