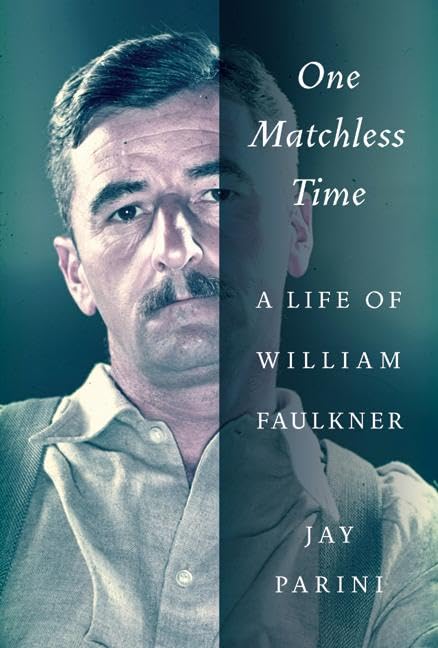 One matchless time : a life of William Faulkner

"One Matchless time is an evocation of William Faulkner's life and work. From his birth in 1897 in Mississippi to his death sixty-five years later, Faulkner spent almost his entire life on this one small patch of land, the "significant soil" from which all his fiction grew. Jay Parini paints an intimate picture of Faulkner's Mississippi world and shows how the artist transformed this raw material into Yoknapatawpha County, a place of pure imagination." "Between 1928 and 1942, during what Faulkner called his "one matchless time," a period of wild inspiration when characters and stories came to him mysteriously and in abundance, he published more than half a dozen masterpieces, including the novels The Sound and the Fury; As I Lay Dying; Sanctuary; Light in August; Absalom, Absalom!; The Wild Palms; Go Down, Moses; and The Hamlet. This is an astonishing achievement without equal in American literature." "Parini, who has taught Faulkner's work to students for nearly thirty years, brings to life this writer's complex fictional world in the context of his life, using the one to illuminate the other. He uses letters and memoirs unavailable to earlier biographers as well as interviews he had with Faulkner's daughter and several of his lovers. His William Faulkner is an immensely gifted, obsessive artist plagued by alcoholism and a bad marriage, but someone who rose above his limitations to become a figure of major importance on the stage of world literature."--BOOK JACKET.… (more)

New York Review of Books
His scheme is to follow Faulkner's life chronologically, interrupting the narrative with short critical essays of an introductory nature on individual works. In the right hands such a scheme could result in exemplary specimens of the critic's art. But Parini's essays are not up to exemplary standard.

LibraryThing member BeaverMeyer
Here is a terrific, accessible biography about Faulkner. His faults are drawn out here, I guess because they make for interesting writing. It's still impressive how he overcame them in order to put together the insanely good novels and stories that make him maybe the greatest American writer.
4 more
LibraryThing member SigmundFraud
Having read Blottner's biography of Faulkner many years ago I was curious to get an update by reading Parini's One Matchless Time: A Life of William Faulkner. It offered a thorough discussion and analyses of all Faulkner's works as well as a good look at his life. He was sadly a womanizer and a drunk even if he was one of America's greatest writers though he wasn't always well received by the critics. I thoroughly enjoyed this biography and it incited me to tackle some of Faulkner's novels even though I find them daunting. If you are interested in writers' lives as I am I encourage you to pick up this book.… (more)
LibraryThing member msf59
“I discovered that my own little postage stamp of native soil was worth writing about and that I would never live long enough to exhaust it, and that by sublimating the actual into the apocryphal I would have the complete liberty to use whatever talent I might have to its absolute top.”

“It is my ambition to be, as a private individual, abolished and voided from history, leaving it markless, no refuse save the printed books.”

“In Faulkner, the grotesque typically emerges in terms of the horrific. He presents a wide array of twisted old spinsters, compulsive sadists, eccentric lovers of beasts, incestuous brothers and fathers, unfeeling mothers, and toothless wonders who revel in the base forms of human behavior.”

In this outstanding biography, the author mentions that one does not read Faulkner, but rereads him. I think that is an excellent observation and it is one that highlights my failing, in regards to this difficult southern author. Yes, I have read and enjoyed several of his classic novels, but I have only taken a peek, a mere glimpse at what, this writer is trying to convey, so my appreciation is limited. I better get busy, catching up with his "must-read" books, plus the inevitable "rereading".

I knew very little about Faulkner's life, which was the reason I wanted to read this bio and I can't imagine another biographer doing a better job, casting an intense spotlight on this man's history, which is endlessly fascinating. Parini is also an excellent writer, in his own right, so the narrative hums along like a song:

“In the end, however, William Faulkner stands alone, a master of tragic farce, a wild-eyed comedian, a raconteur of the highest order, still sitting around the campfire in the Big Woods, still talking in the thousands of pages that remain his legacy.”… (more)
LibraryThing member scottjpearson
The name William Faulkner evokes a great deal of respect (and perhaps fear) from readers. He is known for long sentences that span more than one page. He is inescapably deep – an abyss. He sees into the Southern American male experience as no other and draws out truths that apply to all of humanity. His allure extends from the South into New England, across the Atlantic to France and down the isthmus to Latin America.

To be successful, a biographer of Faulkner has to be utterly in-touch with himself/herself. Parini seems up to the task, though even he self-consciously doubts his portrait in the conclusion. He tries to tie together Faulkner’s life and writings into one coherent unit. He succeeds in my measure even though I still get lost in the depthlessness of the characters in Yoknapatawpha County, Mississippi.

Parini delineates with relative objectivity “Bill” Faulkner’s failed marriage, his affairs, the adoration of his daughter Jill, and Bill’s ever-expanding mastery of his financial and economic situation. Parini tackles Faulkner’s brilliant speech in Stockholm to accept the Nobel Prize with an equanimity worth of the moment. As with any good biography, I leave with the feeling that I have known Faulkner and that I have known the author.

… (more)
LibraryThing member gayla.bassham
Not as detailed as the Blotner but more accessible. Not as good as Parini's bio of Frost, though. Made me want to reread The Sound and the Fury.
Fewer