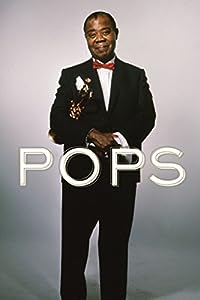 Pops : a life of Louis Armstrong

Louis Armstrong was the greatest jazz musician of the twentieth century and a giant of modern American culture. Offstage he was witty, introspective and unexpectedly complex, a beloved colleague with an explosive temper whose larger-than-life personality was tougher and more sharp-edged than his worshipping fans ever knew. Wall Street Journal arts columnist Terry Teachout has drawn on new sources unavailable to previous biographers, including hundreds of private recordings of backstage and after-hours conversations, to craft a sweeping new narrative biography of this towering figure that shares, for the first time, full, accurate versions of such storied events as Armstrong's quarrel with President Eisenhower and his decision to break up his big band.--From publisher description.… (more)

The New York Times
With “Pops,” his eloquent and important new biography of Armstrong, the critic and cultural historian Terry Teachout restores this jazzman to his deserved place in the pantheon of American artists, building upon Gary Giddins’s excellent 1988 study, “Satchmo: The Genius of Louis Armstrong,” and offering a stern rebuttal of James Lincoln Collier’s patronizing 1983 book, “Louis Armstrong: An American Genius.”

LibraryThing member lauranav
This is a very good biography, pulling together the old and new resources, including interviews, tapes, and recordings to provide a full picture of the man and his music. The book covers his life from his poor and rough start in New Orleans to his final years in Queens, New York. The many people he learned from, played with, and inspired are mentioned. Where multiple versions of a story exist the author provides a balanced hearing and an indication of where the truth probably exists.

Best of all, he describes the music. I am not a jazz expert so I appreciated being told when something was special, new, and different from what everyone else was doing. Terry Teachout describes what Armstrong did that showed how great a trumpet player he was. He also shows how others learned from Armstrong or played their own thing that contributed to the evolution of jazz. It is all a wonderful lesson told in a great way. There is a list at the end of the major recordings of Armstrong's life - I think it is amazing and wonderful that so many of the early recordings form the 1920's and 1930's are available. I found it useful to listen to the recordings as they were described in the book.

The other aspect I appreciated was the description of and interpretation of Armstrong's reputation through the decades that he played. Why younger musicians didn't appreciate his style on stage, why critics didn't appreciate his later years, and how Armstrong felt about all of that. A good book about a great man.… (more)
6 more
LibraryThing member TomDHall
This biography of Satchmo is written by a jazz musician and journalist who appreciates what Armstrong contributed to American music. I got a sense of the man and his music and felt I was reading a well-paced novel.
LibraryThing member HHS-Staff
Reviewed by Mr. Overeem (Language Arts)
Missouri native Terry Teachout sets the record straight on the 20th century's most important and most frequently misunderstood musician, about whom Duke Ellington said, "He was born poor, died rich, and didn't hurt anyone along the way." Warm, precise, funny, and probing, Teachout's style matches his subject's personality. A beauty of a read.… (more)
LibraryThing member MLBowers
I am sure it is just me, but I couldn't get through this. The level of detail about the music and various characters I am sure will be fascinating to some, but for me it became work.
LibraryThing member pdever
A super biography, both easy to read and interesting. I learned a lot, not only about Louis Armstrong and his music, but also about the world in which he performed--whether that meant the effects of early recording technology on the way bands played during their sessions; how the mob was tied up with Louis' business and served as impetus for his first trips to Europe; or how Louis responded to the standoff between Eisenhower and Governor Faubus after the supreme court ordered desegregation of Arkansas schools.

Teachout refers to the book as a narrative biography and that provides a good description of the easy way the book reads. He also allows Louis to speak for himself much of the time, and includes a lot of straight quotation of the man's own words.… (more)
LibraryThing member MacDad
Louis Armstrong is one of the legends of twentieth century music. During five decades as a performer he thrilled audiences with his cornet and trumpet virtuosity, while his gravelly voice made him one of the most popular and recognizable singers of his day. Such a career became the stuff of legend, making it difficult to discern the truth underneath. In this book, Terry Teachout undertakes the difficult task to sift though the legend to discover the man underneath.

In this he is aided by Armstrong, who left behind two autobiographies and numerous audio recordings. From them we learn a man unashamed of his impoverished beginnings in the "black Storyville" neighborhood of New Orleans. The musical scene of the town's brothels and clubs provided the young Armstrong with both his early musical education and his first employment. Teachout goes on to describe his journey during the 1920s from promising young cornet player into the headlining talent he became by the end of the decade. Teachout rightly gives this period, one that saw some of his most innovative music, considerable attention, but he challenges critics such as Gunther Schuller who dismiss Armstrong's work with the big bands of the 1930s and 1940s. These decades dominate the biography, taking up eight of the book's twelve chapters. The final chapters chronicle the established entertainer who faced the twin challenges of aging and the disdainful attitude of the younger generation of musicians who followed in his giant footsteps.

In examining Armstrong's life, Teachout brings to bear his skills as detective and storyteller. He succeeds in depicting a very human yet enormously gifted performer, a talented musician who was also a superb entertainer. His book easily supersedes earlier biographies of Armstrong in its thoroughness and readability, yet it remains frustratingly incomplete by itself. For while Teachout does an admirable job of describing Armstrong's music, the book really is best enjoyed when accompanied by the songs Teachout describes. Though the author identified thirty songs in an appendix that can be downloaded by the reader, the sheer amount of music he describes warrants more comprehensive collections. It is only when listening to them in conjunction with Teachout's book that the degree of Armstrong's achievement is best understood.… (more)
LibraryThing member rynk
As music critic Terry Teachout can describe a Hot Five performance in both technical and emotional terms. He does the same for his subject, in the process stripping away cant and historical baggage. The combination of scholarly and critical perspective is winning. He knows his Sachmo.
Fewer