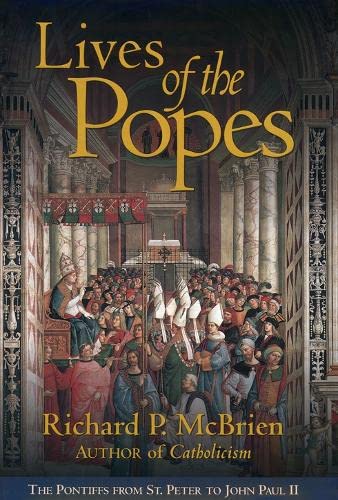 Lives of the popes : the pontiffs from St. Peter to John Paul II

Lives of the Pope is the most thorough, vivid, and fascinating history of the papacy available. Renowned Catholic commentator Richard McBrien offers a fresh, intelligent look at each of the 262 popes, including:-The Apostle Peter, the first pope, in his singular role as Vicar of ChristFormosus, the pope whose corpse was exhumed, dressed in full vestments, and subjected to a mock trial for papal misdeedsBoniface, elected pope after having been defrocked twice for immoralityJohn XXIII, perhaps the most beloved pope in all of historyLives of the Popes provides chronologically arranged biographies of the pontiffs, revealing the full sweep of the papacy. Each entry contains essential information on a pontiff's life, major writings, controversies, and deeds both great and evil. McBrien eloquently and powerfully brings to life the unique stories of the popes and reveals how they transformed Christianity and the world.John Paul II, the present Bishop of Rome… (more)

Heirs of the Fisherman : behind the scenes of papal death and succession by John-Peter Pham
Papal Sin : Structures of Deceit by Garry Wills