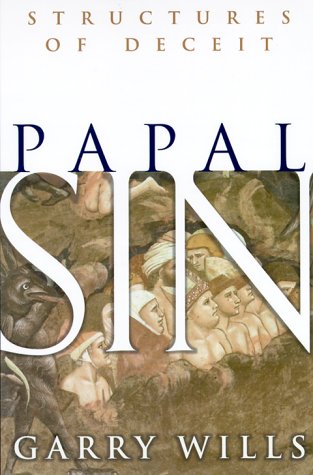 "The truth, we are told, will make us free.   It is time to free Catholics, lay as well as clerical, from the structures of deceit that are our subtle modern form of papal sin.  Paler, subtler, less dramatic than the sins castigated by Orcagna or Dante, these are the quiet sins of intellectual betrayal." --from the Introduction From Pulitzer Prize-winning author Garry Wills comes an assured, acutely insightful--and occasionally stinging--critique of the Catholic Church and its hierarchy from the nineteenth century to the present. Papal Sinin the past was blatant, as Catholics themselves realized when they painted popes roasting in hell on their own church walls.  Surely, the great abuses of the past--the nepotism, murders, and wars of conquest--no longer prevail; yet, the sin of the modern papacy, as revealed by Garry Wills in his penetrating new book, is every bit as real, though less obvious than the old sins. Wills describes a papacy that seems steadfastly unwilling to face the truth about itself, its past, and its relations with others.  The refusal of the authorities of the Church to be honest about its teachings has needlessly exacerbated original mistakes.  Even when the Vatican has tried to tell the truth--e.g., about Catholics and the Holocaust--it has ended up resorting to historical distortions and evasions.  The same is true when the papacy has attempted to deal with its record of discrimination against women, or with its unbelievable assertion that "natural law" dictates its sexual code. Though the blithe disregard of some Catholics for papal directives has occasionally been attributed to mere hedonism or willfulness, it actually reflects a failure, after long trying on their part, to find a credible level of honesty in the official positions adopted by modern popes.  On many issues outside the realm of revealed doctrine, the papacy has made itself unbelievable even to the well-disposed laity. The resulting distrust is in fact a neglected reason for the shortage of priests.  Entirely aside from the public uproar over celibacy, potential clergy have proven unwilling to put themselves in a position that supports dishonest teachings. Wills traces the rise of the papacy's stubborn resistance to the truth, beginning with the challenges posed in the nineteenth century by science, democracy, scriptural scholarship, and rigorous history.  The legacy of that resistance, despite the brief flare of John XXIII's papacy and some good initiatives in the 1960s by the Second Vatican Council (later baffled), is still strong in the Vatican. Finally Wills reminds the reader of the positive potential of the Church by turning to some great truth tellers of the Catholic tradition--St. Augustine, John Henry Newman, John Acton, and John XXIII.  In them, Wills shows that the righteous path can still be taken, if only the Vatican will muster the courage to speak even embarrassing truths in the name of Truth itself.… (more)

The New York Times Book Review
Wills, an eminent historian and one of the most intellectually distinguished members of the Catholic laity in the United States, has written a devastating, no-holds-barred, indictment.

LibraryThing member lilithcat
Garry Wills is one of the most brilliant, intellectually challenging writers of our time. He is also a devout Catholic who is deeply worried about the direction in which his church is headed. In this well-researched book, he discusses how the hierarchical structure of the Church has led to an arrogant abuse of power, and wilful distortions of church history to promote a conservative agenda.… (more)
4 more
LibraryThing member neurodrew
Gary Wills indicts the papacy for failing to admit that its teachings in the past may have been in error. He is particularly referring to issues such as infallibility, clerical celibacy, contraception, and relationships to the Holocaust. He relies on readings of the Bible and Church fathers, particularly Augustine, to demonstrate that the Curial teaching on these issues is not well supported by tradition, and argues that the main reason for the perpetuation of these teachings is the reluctance of the Papacy to admit to past error. He is enlightening on the politics behind discussions of contraception at Vatican 2, and the promulgation of infallibility at Vatican 1. The discussions were well done, compact chapters of wellsupported arguments, but it is hard to know exactly who the book is aimed at; one suspects the clergy will not find it convincing. He is very alarming on the issues of celibacy, and the molestation of young men by priests. He argues convincingly that the priesthood is becoming largely a gay organization. Read mostly on the train to New York for the ANA conference… (more)
LibraryThing member Othemts
Wills relates issues on which the papacy and its supporters are fallible in both the past and present. The need to support these errors to defend the papacy lead to what he calls the structures of deceit that force the Catholic hierarchy to go against the Church’s best interest. If one thing I gained from this book is an understanding of Christian community from the earliest days and the practices of worship that make the Paulist Center more authentic than any other church I’ve attended.

“In sex, you see, it is all or nothing. Unless the act expresses all values possible to it all the time, it is immoral. It would be hard to find a parallel in the moral world for this principle. Can we say that, unless one’s charity is perfectly motivated, you sin by giving alms from lesser motives (e.g. , to bolster self-esteem)? If alms-giving were banned unless its motive was a perfect charity, the church’s donations would fall of sharply.” -p. 100

“The twelve apostles were men, so all priests must be men. But the twelve apostles were married, and the church authorities decided they could change that – in fact, John Paul says that the church cannot go back to the original situation on this point. Saint Peter had a wife, but no modern Pope or priest can. Are we to say that all priests must be converted Jews? The twelve were. Are they all to speak Aramaic? For that matter, if we are to make the gospel situation binding now, we should observe that the apostles were not priests themselves. And there was at least one woman apostle in the New Testament, Junia (Rom 16:7).” p. 104-05

“Serious men might well hestitate before joining this company [the seminary], putting themselves under Rome’s discipline with enthusiastic enforcers as their colleagues. Meanwhile, the number of parishes without priests is growing.

This situation could not have arise in the early centuries of the church. Then a community did not wait for some higher authority to drop a priest down out of the hierarchical heaven, accepting what it was given (if anything). Communities voted for their own priests, who were committed to staying with the community that chose them. There was no candidate list submitted by Rome. Anyone could be chosen, so long as the community wanted that person. That was the proof of a vocation. In fact it was the vocation, the calling by the Christian body of Christ for a leader of its own desire….

A man was obliged to accept this call, out of duty to the Christian community which was Christ’s body.” - p.153

“The better course is to welcome a female analogy for God, but assign it to the third person of the Trinity. The usage even of theologians and Bible translators is misleading when the Spirit is referred to as It – “It breathes where it will.” The personhood of God makes such objectification degrading. The pronoun for the Spirit should be She, which will make clear that many of the functions assigned to Mary (as a symbol of the church, or its protector) truly belong to the Trinity in its female analogue. One should pray to Her as well as to Him.” - p. 218

“Christ likes us to prefer truth to him, because, before being Christ, he is truth. If one turns aside from him to go to the truth, one will not go far before falling into his arms.” – Simone Weil, quoted on p. 275

“Girard’s most radical assertion is that Jesus is not a sacrifice. His Father is not one whose aggressions need to be bought off. Jesus is not an item of barter in the exchange system of set up by sacrifice; God does not accept victims. He sides with the victims against its slayers, reversing the whole logic of placation.” – p. 305… (more)
LibraryThing member gmmoney
I was fascinated by this book and the bureaucracy surrounding the decision making process in the Roman Catholic church. Reading this book really sheds light on the recent revelations in the church and the reaction that has followed.
LibraryThing member Grandeplease
Disclaimer: I am neither a practicing Catholic nor was I raised as a Catholic.

I noticed this book on the bargain table at a local book store, read the jacket and the table of contents and I was intrigued. The book is divided into four sections: Historical Dishonesties; Doctrinal Dishonesties; The Honesty Issue; and The Splendor Of Truth. I recommend using the "search inside this book" option to review the table of contents and the first chapter.

I found this book a challenge. I read a chapter or two and then did not pick up the book for weeks. At times reading Papal Sin was laborious, yet like physical exercise the mental exercise was beneficial. Of particular interest were the chapters on women (Excluded Women), celibacy of priests (The Pope's Eunuch's and Priestly Caste), priests as sex offenders (Conspiracy of Silence), homosexuality (A Gay Priesthood) and contraception (The Gift of Life).

To a non-Catholic, Papal Sin is educational and fascinating. To a devote Catholic who believes in the infallibility of the Pope, this book is likely blasphemous.… (more)
Fewer

Lives of the popes : the pontiffs from St. Peter to John Paul II by Richard P. McBrien
Heirs of the Fisherman : behind the scenes of papal death and succession by John-Peter Pham
The Popes against the Jews: the Vatican's role in the rise of modern anti-semitism by David I. Kertzer
Beyond belief : the secret Gospel of Thomas by Elaine H. Pagels