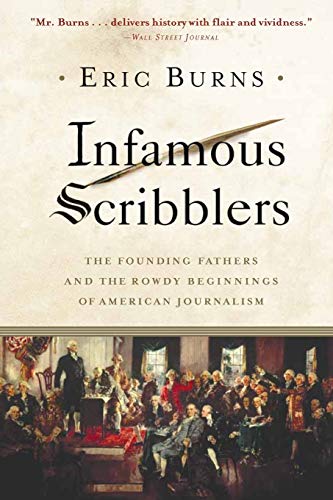 Infamous Scribblers: The Founding Fathers and the Rowdy Beginnings of American Journalism

Infamous Scribblers is a perceptive and witty exploration of the most volatile period in the history of the American press. News correspondent and renonwned media historian Eric Burns tells of Ben Franklin, Alexander Hamilton and Sam Adams--the leading journalists among the Founding Fathers; of George Washington and John Adams, the leading disdainers of journalists; and Thomas Jefferson, the leading manipulator of journalists. These men and the writers who abused and praised them in print (there was, at the time, no job description of "journalist") included the incendiary James Franklin, Ben's brother and one of the first muckrakers; the high minded Thomas Paine; the hatchet man James Callender, and a rebellious crowd of propagandists, pamphleteers, and publishers. It was Washington who gave this book its title. He once wrote of his dismay at being "buffited in the public prints by a set of infamous scribblers." The journalism of the era was often partisan, fabricated, overheated, scandalous, sensationalistic and sometimes stirring, brilliant, and indispensable. Despite its flaws--even because of some of them--the participants hashed out publicly the issues that would lead America to declare its independence and, after the war, to determine what sort of nation it would be.… (more)

LibraryThing member PointedPundit
The opening sentence says it all.

Franklin’s brother, James, was one of the first muckrakers. Thomas Paine was thought-provoking, high-minded and persuasive. James Callender was a hatchet man. The journalists of the era were often partisan, scandalous and sensational. They were often stirring, passionate and brilliant.

Together they aired the issues that caused the now United States to declare its independence and chart a course that lead to its position in the world today. Eric Burns, host of Fox News Channel’s “Fox News Watch” relates the story.

This tale is essential to understanding the press’ role in our society today.… (more)
3 more
LibraryThing member jcbrunner
Contrary to text book history, freedom of speech and print were often not respected in early America. The Wild West started in the East. A printer with unsuitable opinions might face a mob intent on destroying his press and his limbs. Violent Times! Dissent against the majority was a dangerous (and commercially fatal) business.

George Washington suffered from the countless petty abuses of the "infamous scribblers". Authorities were exposed to a level of slander and insults well beyond the limits of proper society. Norbert Elias might have seen this as examples of the still incomplete progress towards more civility. Washington remained a news junkie, reading ten daily newspapers during his retirement. He was not the only Founding Father to suffer, but he was one of the few not to take up the pen himself and retaliate with equally colorful words. The books presents a vivid picture of the writing politicians such as Benjamin Franklin, Samuel Adams, John Adams, James Madison, Alexander Hamilton and Thomas Jefferson, and compares them to the first proper journalists including (again) Benjamin Franklin, Samuel Adams, Benjamin Edes and James Gill, James Rivington, John Fenno, Philip Freneau, Benjamin Franklin Bache, and James Callender.

This entertaining journey to the beginning of American journalism and the Founding Fathers has a dark side, a pernicious bias of its author, a former "Fox News Watch" moderator. While the writing is pleasant, the selection of the stories amusing and the research impeccable, his analysis is deeply flawed. What he presents in this book is not a fair assessment of journalism - then and now.

This flaw has two causes. The first cause is his restricted frame of reference. He compares the Founding Father's media to today's media without taking the intermediate stages (such as the Civil War media) into account, and only refers once to the inter-World War Hearst papers. Abraham Lincoln was exposed to slander just as mean as any of his predecessors. A more international outlook might have helped him to see the big picture. After all, my daily newspaper, Neue Zürcher Zeitung (established in 1780), covered those events and has not stopped publishing ever since. A proper assessment of early American journalism must include at least the British media scene (which supplied America with quite a number of journalists and was the frame of reference for the time). As it is, his judgments are based on weak evidence, even for a work of popular history.

The second cause is his rose-tinted view of the present media. Read his conclusion (p.406): "But we have not adopted their (ie Founding Father's) style of journalism. We do not, in most of our print and broadcast news sources, impugn character as they did. We do not, except in extraordinary cases, use the kind of language they did. We do not, except on well-publicized and well-punished occasions, make up the news to suit our ideology. It is a rare example of our turning our backs on the Founding Fathers, finding them unworthy, rejecting their legacy. We are to be commended." For a book written in 2006, when the failings of US journalism were obvious for even the less sharp observers, it takes the sort of newspeak and chutzpa of Fox' "fair and balanced" (when they are neither) to proclaim such sentences. If the author believes that these sentences faithfully describe current US journalism, I have to severely question his judgment. If on the on the other hand, the author does not himself believe in them, he does his readers a disservice. Read the book for the splendid anecdotes, but beware of the author's bias.… (more)
LibraryThing member Unreachableshelf
An interesting history of the thoroughly partial American press, from the first colonial newspapers through the Jefferson administration. It gets a bit meandering at the end, but I would still recommend it to anybody interested in journalism, politics, or both.
LibraryThing member davemac
An excellent book - quite entertaining and informative. My only complaint - it seemed to end rather abruptly. It could have used a few more chapters. But then, as the post-script suggests, perhaps once the Federalists were out of office the fire went out in the journalism of the day and there simply was nothing more to say.… (more)
Fewer

To begin the world anew : The genius and ambiguities of the American founders by Bernard Bailyn
American creation : triumphs and tragedies at the founding of the republic by Joseph J. Ellis