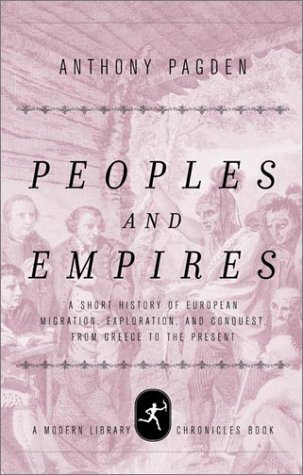 Peoples and Empires: A Short History of European Migration, Exploration, and Conquest, from Greece to the Present (Modern Library Chronicles)

Anthony Pagden begins his history with the ancient Greeks, who saw themselves as extreme voyagers. They were explorers, they lived in many different places and they were witnesses to one of the most decisive turning points in human history: the moment when the nomadic life gave way to one which was agricultural, city-dwelling and settled. He then moves on to consider the Romans, who transformed migration into a form of domination and sought to impose civility - that is the lifestyle and laws of the city - upon all whom they conquered. The book culminates in an account of the great European overseas migrations, and the consequences of the initial encounters between civilized Europeans and barbarian aborigines, the dramatic effects of which are still felt acutely today. Drawing upon literary, anthropological and historical sources from throughout Europe, People and Empires tells the stories of the great movement of peoples in European history.… (more)

The pursuit of power : technology, armed force, and society since A.D. 1000 by William H. McNeill
Day of Empire : How hyperpowers rise to global dominance--and why they fall by Amy Chua
The American Revolution: A History by Gordon S. Wood