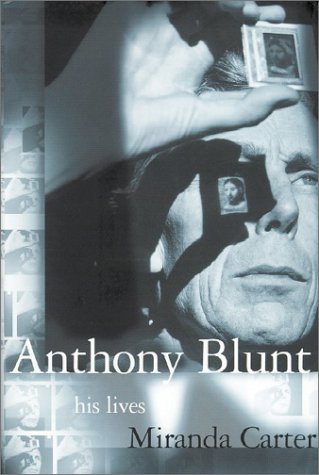 "When Anthony Blunt died in 1983 be was a man about whom almost anything could be - and was - said. He was accused of everything from causing the death of Allied agents during the war to conspiring to suppress the reputation of British art; from blackmailing the Royal Family to paedophilia. He was a blank screen on which fantasy and delusion were projected." "Anthony Blunt: His Lives reveals the man behind the myths and rumours: aesthete, communist, homosexual, spy. As Surveyor of the Queen's Pictures and Director of the Courtauld Institute, Blunt's position as a stellar member of the Establishment had seemed utterly assured. But, in 1979, Margaret Thatcher exposed him as a former Soviet spy, and Blunt was stripped of his knighthood and became a figure of universal opprobrium."--BOOK JACKET.Title Summary field provided by Blackwell North America, Inc. All Rights Reserved… (more)

New stateman
The Cambridge Five have always been regarded as traitors - they handed over government files to the Soviet Union - but the real cause of the scandal they created, and the reason why they are remembered when others are forgotten, is that they were perceived as traitors not so much to their country as to their class. Like "going native" during the empire, this class treachery was their truly unforgivable sin.
— 3 more
Kirkus Reviews
Carter has assimilated the massive and often unreliable literature on espionage to produce an authoritative and often hilarious account of this period.
Booklist
The author's research appears impeccable, and her tone is evenhanded and straightforward. It is possible to read much between the lines of Blunt's life, but Carter stays away from facile explanations for his complex behavior.
Publishers Weekly
The biggest challenge any Blunt biographer faces is Blunt himself, a man of almost legendary emotional detachment. Blunt revealed little about his personal life, yet Carter has managed to bring readers as close to this enigmatic man as humanly possible. Thoroughly researched and carefully crafted, this is sure to be the definitive biography.

LibraryThing member willmurdoch
A sad ending to a interesting life of the more talented of the "Cambridge Spies". Blunt was manipulated by the stronger personality of Guy Burgess but made the choice to help the Soviets and lived to regret not knowing the truth about them. In the thirties he saw the Soviet Union as the only country to stand up to the European fascists and fight for the Republic in Spain, for one example. His upper class in Britain was quite guilty of appeasement; the treason he embarked upon was against his class as well as his country. This was a time homosexuals kept secrets as a matter of survival. Compartmentalization was necessary for personal as well as political life; and as such contributed to his tragic decision to spy for the NKVD.… (more)
1 more
LibraryThing member PDCRead
There were many facets to the glittering career of Anthony Blunt; art historian, director of Courtauld, international art expert, spy, Surveyor of the Queens Pictures and establishment figure. But what he is best remembered for is his betrayal; for he was a traitor.

In this book, Carter has written a forensic dissection of his life, from the privileged education at Marlborough and Cambridge, his early career in the art world, courtier to the royal family and war work in the intelligence services and post war activities where he built his reputation as an academic in the art world. In his early days he held very Marxist views and these were reflected in his articles and writing. A contemporary of Burgess, Maclean and Philby he was one of those recruited whilst at Cambridge by the Soviets. He passed a number of secrets to them during and after the war, nothing to the level of Philby, but crucial information nonetheless. Rather than this being just a principled ideology, he accepted a number of payments from them. After leaving MI5 he was passed papers from Burgess to courier to them.

Burgess and Maclean defected and slowly the net closed in. Philby was sacked from MI6 and the investigations were started on those that knew or were associated with these spies. Blunt was one of those suspected, but there was no evidence initially, but slowly through the smoke and mirrors came the evidence that they needed. The spies extracted a confession from Blunt, and quietly brushed the scandal under the carpet, with the intention of releasing the story after he had died. In 1979 though his treachery was revealed in Parliament by Thatcher. All his honours and knighthoods were stripped and he was hounded by the press.

This was a fascinating book to read in lots of ways. The amount of detail in here is immense too, even covering his visits to post war Germany to recover letters and artworks for the King. Carter has covered with almost clinical precision probably everything that you could ever want to know about Blunt; the others from the Cambridge ring play second fiddle in the book to Blunt as well, making the focus mostly on him. Blunt could have so easily not been a spy, if the right opportunity had presented itself at the time, but his Marxist sympathies and Cambridge contacts meant that he became one. It was not done out of principle either, he was paid for some of the material that he supplied showing that he was committed to these actions. The spy agencies at the time never thought that people from the establishment would ever betray their country. How wrong they were.

And having been betrayed, the establishment then sought to protect their own.… (more)
Fewer