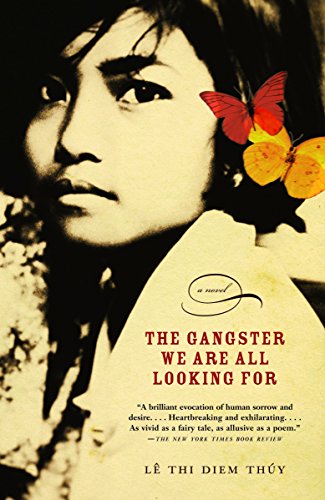 The gangster we are all looking for

"In 1978 six refugees - a girl, her father, and four "uncles" - are pulled from the sea to begin a new life in San Diego. In the child's imagination, the world of itchy dresses and run-down apartments is transmuted into an unearthly realm: she sees everything intensely, hears the distress calls of inanimate objects and waits for her mother to join her." "But life loses none of its strangeness when the family is reunited. As the girl grows, her matter-of-fact innocence eddies increasingly around opaque and ghostly traumas: the cataclysm that engulfed her homeland, the memory of a brother who drowned and, most inescapable, her father's hopeless rage for a father's order."--BOOK JACKET.

LibraryThing member soylentgreen23
A charming little book, written in a spare style that reminded me at times of Richard Brautigan. It's interesting and at times moving - the story of a little girl brought to California from Vietnam, and some of her struggles growing up different, dealing with parents who feel the loss of their home culture, and the death of her brother in early childhood.… (more)
4 more
LibraryThing member LJuneOsborne
Reading this book was for an English class, and I'm very glad for it, as I doubt I would have come across it otherwise.

I've read a handful of books about Vietnamese people living in America after the war, my favorite being Catfish and Mandala by Andrew X. Pham. This book is focused more on the child's view of the story, specifically the relationship between the narrator and her father, who she refers to as Ba. In the first part of the book Ba is a sort of protector as she struggles to understand American life and customs, while in the rest his happiness deteriorates and he begins drinking heavily. The prose is delightful and simple, filled with the type of wise words one comes to expect when reading something written by, or from the point of view of, children. A child's voice brings a profound sense of innocence and double meaning to each sentence, phrase, and word.

The style of this book also reminded me of Sandra Cisneros's The House on Mango Street but focusing on darker situations and feelings. Only 158 pages of memorable prose but I might have liked it better if it were longer. It feels like most all of the punchlines of each story were vague and full of hints, sometimes it would be nice if they were elaborated upon.… (more)
LibraryThing member g0ldenboy
This is the third of three novels assigned to my college's Asian American Literature course. I'll give to to lê, she can write, but the plot is too sparse for my tastes, and I'd rather just read some poetry.
LibraryThing member Beej415
A moving and somewhat depressing story about home, cultural identity, assimilation, and cultural values. A young girl and her father come to the United States as one of many Vietnamese "boat people" in the 1970s. Her mother joins them later and the family plods from apartment to apartment trying, it seems, constantly to start a life in this foreign place. The southern California in which the family finds itself is glossy and bright, but shallow and meaningless. And the memories of home become increasingly bittersweet.… (more)
LibraryThing member Salsabrarian
Recollections and observations of life in America through the eyes of a young Vietnamese refugee girl. She lives first with her father and four "uncles" in San Diego; later her mother joins them. All poetic description but no action, no forward motion.
Fewer

Catfish and Mandala: A Two-Wheeled Voyage Through the Landscape and Memory of Vietnam by Andrew X. Pham
The Book of Salt: A Novel by Monique Truong
Native speaker by Chang-rae Lee
Dogeaters by Jessica Tarahata Hagedorn
Bone by Fae Myenne Ng
10 more
Paradise of the blind by Thu Hương Dương
The bridegroom : stories by Ha Jin
No-No Boy by John Okada
A gesture life by Chang-rae Lee
The beautiful things that heaven bears by Dinaw Mengestu
The interpreter by Suki Kim
A good scent from a strange mountain : stories by Robert Olen Butler
Spring essence : the poetry of Hò̂ Xuân Hương by Xuân Hương Hò̂
The woman warrior : memoirs of a girlhood among ghosts by Maxine Hong Kingston
The accidental Asian : notes of a native speaker by Eric Liu
Fewer