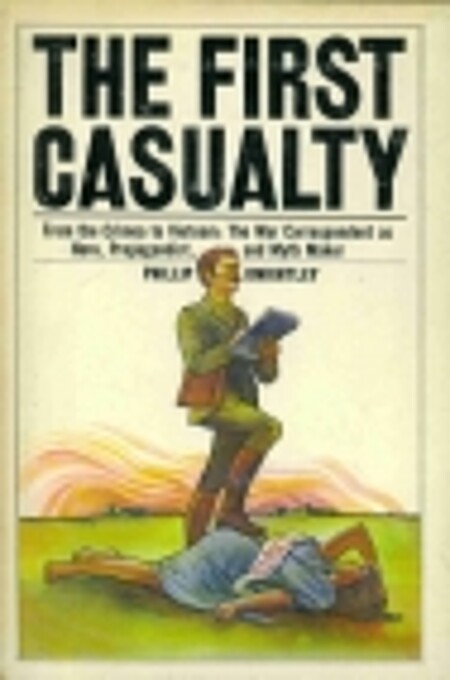 The first casualty : from the Crimea to Vietnam : the war correspondent as hero, propagandist, and myth maker

"Since Vietnam, Phillip Knightley reveals, governments have become much more adept at managing the media, as highlighted in chapters on the Falklands War, the Gulf War, and the conflict between NATO and Serbia over Kosovo. And in a new chapter on the post-9/11 wars in Afghanistan and Iraq, Knightley details even greater degrees of government manipulation and media complicity - the "embedding" of reporters in military units and the uncritical, openly patriotic coverage of these conflicts. "The age of the war correspondent as hero," he concludes, "appears to be over." Fully updated, The First Casualty remains required reading for anyone concerned about freedom of the press, journalistic responsibility, and the nature of modern warfare."--BOOK JACKET.… (more)

LibraryThing member missmath144
Dull reading at first, but in the end it presented an impressive feel for the drudgery, callousness and injustices of war.
2 more
LibraryThing member Schmerguls
This is a 1975 book and covers reporting from the war zone in every war from the Crimean to Vietnam. The author, an Australian, finds war correspondents have generally done a poor job in getting facts to people--usually not the correspondent's fault. He states war cirrespondents in Vietnam did a better job than in any of the other wars he studies. The author is very critical of correspondents who are more interested in having their side win than in getting facts to the public--and I agree with him except when he expects the correspondent to not be "for" the side the correspondent feels is the right side. For instance, I deplore non-objective reporting in the Spanish Civil War, but can forgive such in World War II. The book covers a lot of ground and does a good job and I found it consistently worth reading--and often telling me startling things I did not know… (more)
LibraryThing member douboy50
This review is for the 1975 edition which covers the period from the Crimean War through Viet Nam. My son just purchased the 2004 edition which goes into Iraq. In effect, my son's edition adds about 4 additional chapters to update the book. This is a most interesting story. It informs the reader about the initial work of the war correspondents which included not only covering the war, but also participating in combat.

Of most importance is that the author discusses the relationship between the press, the military, and the government in presenting war to public at home. The role on censorship is covered in depth. I found it startling the extent to which the government and military used the press and were able influence how war was presented in a favorable light regardless of the actual situation. I am not naive. It just amazed me how the press corps could sell out to this extent to the military and government. This statement includes all nations, not just the US. Basically, not until the Viet Nam conflict did the press 'step up' to report what was actually going on. Unfortunately, this 'stepping up' created such a negative backlash that the nation over compensated to public opinion affecting national policy. I will not say any more, too personally involved in the situation.

I highly recommend this book for a valuable insight into the military, government, press combine.… (more)
Fewer

Dispatches by Michael Herr
The boys on the bus by Timothy Crouse
The march of folly : from Troy to Vietnam by Barbara Wertheim Tuchman
Reporting World War II: Part Two American Journalism 1944-1946
Wartime : understanding and behavior in the Second World War by Paul Fussell
1 more
Here is your war by Ernie Pyle
Fewer