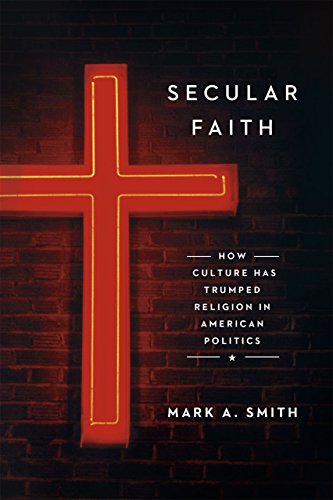 Secular faith : how culture has trumped religion in American politics

by Mark A. Smith

When Pope Francis recently answered "Who am I to judge?" when asked about homosexuality, he ushered in a new era for the Catholic church. A decade ago, it would have been unthinkable for a pope to express tolerance for homosexuality. Yet shifts of this kind are actually common in the history of Christian groups. Within the United States, Christian leaders have regularly revised their teachings to match the beliefs and opinions gaining support among their members and larger society. Mark A. Smith provocatively argues that religion is not nearly the unchanging conservative influence in American politics that we have come to think it is. In fact, in the long run, religion is best understood as responding to changing political and cultural values rather than shaping them. Smith makes his case by charting five contentious issues in America's history: slavery, divorce, homosexuality, abortion, and women's rights. For each, he shows how the political views of even the most conservative Christians evolved in the same direction as the rest of society--perhaps not as swiftly, but always on the same arc. During periods of cultural transition, Christian leaders do resist prevailing values and behaviors, but those same leaders inevitably acquiesce--often by reinterpreting the Bible--if their positions become no longer tenable. Secular ideas and influences thereby shape the ways Christians read and interpret their scriptures. So powerful are the cultural and societal norms surrounding us that Christians in America today hold more in common morally and politically with their atheist neighbors than with the Christians of earlier centuries. In fact, the strongest predictors of people's moral beliefs are not their religious commitments or lack thereof but rather when and where they were born. A thoroughly researched and ultimately hopeful book on the prospects for political harmony, Secular Faith demonstrates how, over the long run, boundaries of secular and religious cultures converge.… (more)