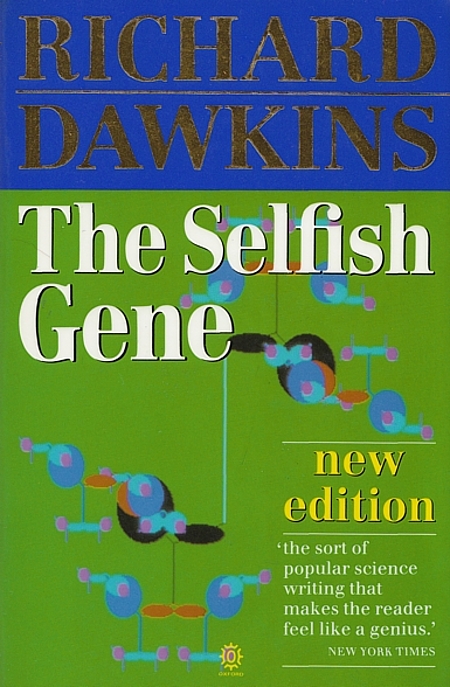 "The Selfish Gene is remarkable in several ways. First published in 1976, aimed at a general audience and written by a then little-known young lecturer in zoology at Oxford University, The Selfish Gene rapidly became highly influential. The important biological work of such figures as W. D. Hamilton and Robert Trivers was introduced to a wider public for the first time. But that was not all. Drawing together the threads of contemporary research in Neo-Darwinism into a powerful vision of the living world viewed through the eyes of genes as the units of selection, it was a significant contribution to biological thought. The full explanatory power of the gene's eye view was presented, in fine non-technical prose, for the first time in one short volume, bringing novel insights to those working in the field and inspiring whole new areas of research. Yet even that is not all. It has been widely acclaimed too for its literary qualities. Here is a book that set a new standard in science writing for the wider public, a modern masterpiece that fresh generations of aspiring young scientists would seek to emulate."--BOOK JACKET.… (more)

LibraryThing member princemuchao
This classic science text personifies the gene in order to look at evolution/natural selection in a new way. Game theory and its effects on natural selection play a key role, and Dawkins' biological examples throughout are interesting and informative - did you know that male bees do not have fathers?

This is also the book that introduced Dawkins' concept of memes - all the more important a concept to those internet-savvy individuals who may be using this "web 2.0" site.

Written in 1976, the text is a bit dated, but the 30th anniversary edition has 50 pages of endnotes that elucidate the text and deal with some of the controversy and counter-responses generated after its publication.… (more)
24 more
LibraryThing member iayork
Careful when you choose the "red pill": "Why are people?" This is the title of the first chapter of Selfish Gene. In the first paragraph of the book the author states that Charles Darwin made ii possible for us to answer this question sensibly. The book promises to help the reader answer this question and such others as "Is there meaning to life?" It delivers on the promise.

Dawkins has a unique gift for communication. As you read a paragraph densely packed with concepts and assimilate them, inevitably your mind goes "hmm... that's sounds good, but.." Invariably Dawkins has anticipated these objections and he deals with them one by one. There are many other good books out there which explain the theory of Charles Darwin but I would be surprised if any of them is as good as the Selfish Gene.

A word of caution. Starting to look at the world through Darwinian glasses is very similar to Neo's taking the "red pill" in matrix. These glasses make you question a lot of "facts" assumptions and even your sense of right and wrong, which can be disturbing.… (more)
LibraryThing member imnotsatan
Dawkins is a pompous, overblown windbag, and his writing is exactly what you'd expect from a person like him. There's nothing wrong with the ideas; the ideas are fine. However, Dawkins's "listen at me because I am so very, very smart and therefore better than you" attitude ruined any enjoyment I could have drawn from them.
LibraryThing member johnxlibris
The basic premise of this foundational work states that genes will act "selfishly" in order to ensure further self-replication. This does not imply that they do this consciously, but as Dawkins carefully lays out, the selfishness is behavioral, not subjective. To put it differently, genes that behave selfishly (they benefit at the expense of others) tend the survive and replicate themselves into the next generation. That behavior is then repeated. Even apparently altruistic behavior in the organisms, the genes' vehicle, can be shown to ultimately benefit the genes of the altruistic host.

My explanation is far too simplified to give justice to Dawkin's work. In his mouth, the workings of creation take on a glorious simplicity even if the explanation for them is laboriously worked out. He discusses how genetic "selfishness" plays out between species, families, sexes, within individuals and even extends beyond the individual into the material world.

Dawkin's book is the answer to the ultimate "how" and a partial response to the "why." It reminds me of the narrator's quote from the latest film adaptation of War of the Worlds (2005): "By the toll of a billion deaths, man had earned his immunity, his right to survive among this planet's infinite organisms. And that right is ours against all challenges." We exist because we can. Sure it's a tautology, but a wonderfully assuring one.… (more)
LibraryThing member bragan
Richard Dawkins is probably best known these days for his writings about atheism and religion. No matter what you think of his take on that particular topic -- and I have rather complicated mixed feelings about it, myself -- it's a bit of a shame that this has come to overshadow his career as a writer of books on evolution so much. Because the man really does have a marvelous talent for explaining even the most complicated aspects of evolutionary biology in clear and comprehensible terms through the use of apt analogies and the careful construction of simple examples. This gene's-eye view of evolution, which pays particular attention to issues of self-interest and altruism, is certainly no exception. It's by no means the last word on the subject -- Dawkins doesn't for a second pretend that it is -- and since it was written in 1976, some of the details are doubtless a little dated now. (Dawkins' attempt to use a computer-based metaphor at one point is amusingly quaint now, if nothing else.) But there are good reasons why this has remained in print for three decades plus.

The version I have, by the way, is a 2004 reprint of the 1989 edition, which included two new chapters and a large number of excellent new endnotes correcting, clarifying, and expanding on the original text. Apparently there was also a new 30th anniversary edition in 2006, but other than a new introduction, I'm not sure what, if anything, was done to update it then.… (more)
LibraryThing member ashishg
Evolution theory with gene as center of survival competitions, and how animal social behaviours can be interpreted as result of this process. Introduces to "Evolutionary Stable Strategy" concept. Some novel ideas but poorly written or explained, and leaves many questions unanswered.
LibraryThing member Gazgnu
This is the book that kickstarted it all for me. I had the wrong attitude to truth before I read this. Dawkins acheived so much in this work. A new (and logical and true) perspective on our evolutionary origins was presented (mainly using the work of William Hamilton, I think, to put group selection theories in their place). It was presented in a readable way, thus a coming-of-age for the Pop Science genre. It established him as the prime-mover in modern British culture for rational discourse (he's amazingly rigorous in his thoughts, his famous letter to his ten-year-old daughter on the subject of Truth & good criteria for believing in things should be read in school assemblies every thursday, fo' sho'). And he set out a rough theory of memes (cultural darwinism), which also paved the way for much edifying discourse on Universal Darwinism. He's the man.… (more)
LibraryThing member lewallen
The book that popularized the 'selfish gene' movement in biology, which is the idea that all behavior can be explained in terms of genes replicating themselves in the most effective possible manner. The argument is convincingly demonstrated with many examples and excellent reasoning, and for the one apparent exception, humans, Dawkins postulates the existance of a second replator, coining the word "meme" to name it.… (more)
LibraryThing member _Greg
This classic book expands understanding of the evolution and nature of life by looking at it all from the "viewpoint" of genes. This is also the book where Dawkins proposes the idea of memes, the gene-like elements of culture. A must read.
LibraryThing member daschaich
A Classic of Popular Science: More than a quarter-century after its first publication, Richard Dawkins's "The Selfish Gene" remains a classic of popular science writing. This edition includes two new chapters as well as extensive endnotes that do much to perfect the original text and correct the few mistakes that were found in it. "The Selfish Gene" is explicitly directed at the layman, and absolutely no knowledge of biology is assumed. While this presents a danger of boring readers (such as myself) who are already familiar with DNA and meiosis, the colorful metaphors Dawkins uses throughout the book do much to keep the reading engrossing and entertaining.

After a lengthy exploration of basic biology, covering topics such as DNA and the origin of life, Dawkins introduces the gene-centered view of evolution that has long been textbook orthodoxy. Dawkins uses the remainder of the book to look at various types of animal behavior in an effort to convey some general conclusions and tools to help the reader understand evolution and natural selection. Much of his effort is devoted to explaining behavior in terms of the 'selfish gene' - especially social behavior that has long been held to have evolved 'for the good of the species.' Dawkins shows that how fundamental axiom of natural selection (that the genes best at surviving and reproducing will eventually spread through the gene pool) leads directly to the selfish gene and the behavior exhibited by nearly all animals (humans being the prime exception).

Many of Dawkins's metaphors have caused raised eyebrows - one outstanding example is his characterization of living things as "lumbering robots" built to protect the genes that hide in them - but the metaphors are always (eventually) brought under control. The title is one such metaphor that has often been misunderstood by superficial analysis. The 'selfish gene' is simply a gene that does not aid others at its own expense. Such genes would be better able to reproduce and spread through the gene pool than those that did sacrifice themselves for others, and therefore completely dominate the gene pools of all species as a result of billions of years of evolutionary pressure.

The blind watchmaker by Richard Dawkins
The ancestor's tale : a pilgrimage to the dawn of evolution by Richard Dawkins
Darwin's dangerous idea : evolution and the meanings of life by Daniel Clement Dennett
The Greatest Show on Earth : The Evidence for Evolution by Richard Dawkins
Climbing mount improbable by Richard Dawkins
8 more
Nature via nurture : genes, experience, and what makes us human by Matt Ridley
The third chimpanzee : the evolution and future of the human animal by Jared Diamond
Eight little piggies : reflections in natural history by Stephen Jay Gould
The Language Instinct by Steven Pinker
"Surely you're joking, Mr. Feynman!" : adventures of a curious character by Richard Phillips Feynman
The structure of evolutionary theory by Stephen Jay Gould
What Evolution Is by Ernst Mayr
On Human Nature by Edward O. Wilson
Fewer