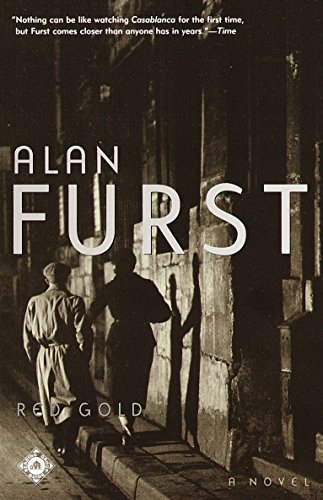 In the autumn of 1941 as German tanks approach Moscow, Stalin issues a desperate order: all secret operatives behind enemy lines must strike no matter what the cost. Into the fray stumbles Jean Casson--once a wealthy Parisian film producer, now penniless and wanted by the Gestapo. But when the local police finally catch him, instead of handing him over to the brutal Germans, they direct him to an old military friend and a new job in the service of the newly resurrected French intelligence service.

LibraryThing member dougwood57
Furst continues the character of Jean Casson (from The World at Night) in Paris and in Vichy France. The book's title refers to the misbegotten notion that Communists would have lots of money - thus Red Gold. Casson, as is Furst's wont, is an honest, decent, almost ordinary guy living on the edge of existence who falls into espionage work.

Unlike some of Furst's more recent works (Kingdom of Shadows and Blood of Victory), this work has a fairly linear plot line. Casson is recruited by anti-German Vichy intelligence officers to make contact with the Communist resistance. Dangerous work indeed.

The plot is stronger, but the 'atmosphere' is not as palpable. Still, Alan Furst is a more than worthy successor to Eric Ambler and Graham Greene.

Highly recommended for fans of the spy genre or fine writing anywhere… (more)
7 more
LibraryThing member majkia
Alan Furst's series is about normal, everyday people stuck in the middle of Hell, when Europe goes to war. Some of them survive, some don't. Some find a way to work in the resistance, some try to escape, some help with that.

He presents the situation, not idealized with brave, beautiful people who are incredible spies, but instead as people who barely manage to find ways to survive, and do what little they can to help the cause of defeating Hitler. Fear is always present and one never knows who is knocking on your door, or who will be knocking it down.… (more)
LibraryThing member ShellyS
Alan Furst is known for his meticulous research into the first years of World War II from the European perspective, mostly focused on the events that occurred in France. In this book, set in 1941-42, during the days of the French Resistance, Jean Casson, a French filmmaker, has been forced to live under an assumed name, unable to make a livelihood, barely able to afford his hotel room and enough food to survive day to day. The Germans have occupied France, and Paris has become a dangerous place for Casson, who had done some intelligence-related work in the past and is trying to stay out of the Gestapo’s hands. Desperate, he’s enlisted to help run arms to French Communists trying to drive out the Germans.

As with the other books I’ve read by Furst, this reads like a series of events in the life of the protagonist, starting with a pivotal moment, and ending at another, leaving the reader to imagine what comes next, even if the main character would continue to survive his next, unwritten adventure. What makes this book, as well as his others, so good, is how well he evokes time and place and puts the reader into the head of the characters, bringing to life their goals, fears, hopes, and quiet desperation.… (more)
LibraryThing member DeltaQueen50
It’s Paris, 1941, the city is under the thumb of the Germans, and Jean-Claude Casson, is using a false identity to move around the city that he loves. When last heard from in The World At Night, Jean-Claude made the fateful decision of not escaping to England. Now he floats around Paris, avoiding places he once went and people he once knew, knowing it is just a matter of time before something gives him away and the Germans take him. Not looking to be a patriot, only hoping to survive but instead, patriotism finds him.

Alan Furst has the ability to bring immediate atmosphere to his stories. In Red Gold, we are sneaking around Paris, clandestinely meeting with Resistance members, ex-military people, communists and Jews, all working separately but all against the Germans. Jean-Claude’s mission is to approach the communists, to get them to work with De Gaulle’s Resistance.

This was a great sequel to [The World At Night]. Many praises for his ability to bring Paris, 1941 to life, from working class people, girls of the night, fugitives, collaborators, Jews and Communists, loyalties that shift in the wind, horrific and violent reprisals, acts of heroism that will never be recognized all bended together to give us a very good look at what the war was like for both this city and country. My only quibble with this book would be his abrupt ending, it certainly left me wanting more. A great read.… (more)
LibraryThing member uvula_fr_b4
The fifth-published Alan Furst novel (whose loosely connected novels are all set before and during WWII) and a direct sequel to the fourth (The World At Night), Red Gold is mainly the story of an erstwhile producer of French gangster movies, Jean Casson, as he mourns the termination of his affair from the previous book with an actress named Citrine, eludes the Nazi Occupational Authority, and sporadically participates in various acts of resistance against the Nazis, aiding both the (now underground) intelligence agency of the Fourth Republic and the French Communists.

While Casson remains an engaging character, the point of view shifts just a bit too often for the reader to be completely invested in his fortunes.

As always in Furst, the atmosphere is paramount, and top-notch, and the attention to detail both convincing and compelling; far and away the most interesting aspects of the book for me, however, were the historical minutae: there were no less than fifteen different resistance groups more or less actively working against the Nazis in France by 1941 (a fact which brought to mind DeGaulle's comment about the number of France's cheeses), but the main ones -- DeGaulle's London-based group (which had the BBC as the world's most effective mouthpiece) and the French Communists -- didn't utilize their resources as much as they could have, because they were both expecting the Nazis to be chased out of Paris in a couple of years once the Americans landed, and, once the U.S. declared war on Germany, they both became primarily interested in who would seize power after the Nazis left. Now there's some realpolitik at which even Henry Kissinger might blush.

Furst's novels, in short, can say things that most history books can't (or won't), and should be highly esteemed if only for that reason.… (more)
LibraryThing member elenchus
In Red Gold, Furst sketches an account of life among partisans, each skeptical if not outright suspicious of one another. It's soon clear the resistance is anything but monolithic: it's a nest of international intrigue, collaborators and national partisans cheek-by-jowl with communists and anarchists of every stripe. In all this, Furst never loses a feel for the lives of all manner of French citizens, whether Parisian sophisticate or Marseilles dock worker.

Furst again works in references to films, usually those allegedly produced by Casson prior to the outbreak of hostilities in Europe.

synopsis | Perhaps six months after Jean Casson jumps from a ship taking him to Britain, he's eking out a living under a false name and facing discovery by the Gestapo or death from starvation. His desperation leads eventually to contact with his old commanding officer, now part of the Vichy resistance, competing with de Gaulle's London-based resistance and itself desperate. Casson agrees to serve as liaison between the DR (the pre-Vichy intelligence service) and a loose network of French and non-French communist cells. It's soon clear the stories of Red Gold are no longer true, if they ever were, and efforts to mount effective operations against the Nazis grow increasingly daring and short on odds.… (more)
LibraryThing member gpaisley
OK. Not my favorite--I don't like Jean-Claude Casson as much as other characters. Seems to be even more meandering than other books.
LibraryThing member JBreedlove
Another suspenseful WWII spy novel from Furst. Not a lot of action but certainly a lot of suspense while describing the Paris life of Jean Casson, a reluctant patriot.
Fewer