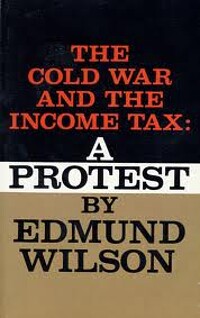 The cold war and the income tax, a protest

The truth is that the people of the United States are at the present time dominated and driven by two kinds of officially propagated fear: fear of the Soviet Union and fear of the income tax. These two terrors have been adjusted so as to complement one another and thus to keep the citizen of our free society under the strain of a double pressure from which he finds himself unable to escape -- like the man in the old Western story, who, chased into a narrow ravine by a buffalo, is confronted with a grizzly bear. If we fail to accept the tax, the Russian buffalo will butt and trample us, and if we try to defy the tax, the federal bear will crush us. The 60,000 officials who are appointed to check on us taxpayers are checked on, themselves, it seems, by another group of agents set to watch them. And supplementing these officials -- since private citizens are paid by the Internal Revenue Service to report on other people's delinquencies, and their names of course are never revealed -- there is a whole host of amateur investigators. . . Does this kind of spying and delation differ much in its incitement to treachery from that which is encouraged in the Soviet Union?… (more)

Book Week
Even more unpleasant than the bureau’s legitimate investigation was the unrelenting impertinence of the investigators. Why did Mr. Wilson spend six dollars to buy a cushion for his dog to sleep on? Why did he keep three places to live when the investigator (who earned a virtuous $7,500 a year) needed only one place to live in? Why was Mr. Wilson’s daughter in a private school? Even worse than this sort of harassment was the inefficiency and buck-passing of the bureau. No one seemed able to make a decision. Regional office A had no idea what regional office B had decided. Then, just as progress was about to be made, a new investigator would be assigned the case and everyone had to go back to the start. Kafka inevitably comes to mind; also, the bureaucracy of the Soviet Union which Mr. Wilson once contrasted — to his regret — unfavorably with our own... Is there a way out? Mr. Wilson is not optimistic. Opponents of the income tax tend to be of the Far Right, where they fear the buffalo even more than they do the bear. There is nothing quite so engaging in our public life today as to hear Barry Goldwater tell us how we can eventually eliminate the graduated income tax while increasing military expenditures. Also, the militant conservative, though he will go to the barricades to keep a Federal dollar from filtering down to a state school, sees nothing wrong with Federal billions subsidizing a corporation in which he owns stock. As for the politicians, they tend to be too much part of the system to try and change it... Yet Mr. Wilson’s grim pamphlet may be just the jolt we need. Not since Thomas Paine has the drum of polemic sounded with such urgency through the land, and it is to be hoped that every citizen of the United States will read this book.