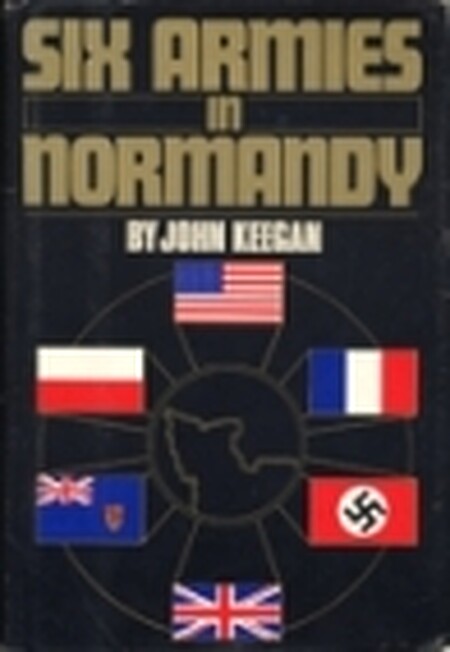 Six armies in Normandy : from D-Day to the liberation of Paris, June 6th-August 25th, 1944

In burnished, driving prose, John Keegan chronicles the 1944 invasion of Normandy, from D-Day to the liberation of Paris. At the same time, he furthers his exploration of the ?role which warfare and its institutions play in social life? by showing how each of the six armies, while resembling one another in purpose and authority, is a mirror of its own nation's values. Each army is shown at successive stages of the invasion in a battle sequence testing them to the utmost: the Americans in their terrifying night drop on the eve of landings, the Canadians at the Omaha beachhead, the English savagely fighting their way inland, the Germans in their surprisingly strong resistance, the Poles in exile desperately blocking the German escape route, and the French at last liberating their City of Light. This extraordinary book is a shining addition to the dramatic literature of men at war.… (more)

LibraryThing member jcbrunner
Keegan is a marvelous writer. The best part of the book is about his almost magical childhood in the countryside of war-torn Britain. He enjoyed the best of times, sheltered from the horror and suffering, only later on experiencing the bleakness of post war Britain. The account of the Normandy campaign follows a cinematic approach. Keegan's narrative follows the action of distinct units. The reader witnesses the landing US 101st Airborne, joins the Canadians at Juno beach, the Scottish division's stopped breakout from Normandy, the English defense against the German counterattack, the vain German defense against the US onslaught and the Polish attempt at blocking a German breakout. Finally, the reader encounters the Free French liberating Paris. All in all, a gripping read in a NATO flavor - at times, it reads like the Russians were the true enemies, while the Germans just battled for the wrong side. The other problem is Keegan's cinematic approach. What happens to the units out of his focus, is not clear. Although it doesn't quite work as an operational history, it grips the reader as a popular account of some of the key scenes of Overlord and the Normandy campaign.… (more)
7 more
LibraryThing member antiquary
To me, this is pasrticularly interesting for the author's introduction giving a child's-eye view of the build-up to the invasion, and for the account of the little-known Polish role in the campaign. Overall, it is more balanced than many accounts which focus on the Us role.
LibraryThing member sergerca
Sections of this book are great, others are very slow and tough to follow do to incessant references to divisions by number.

If you are looking for a book on the D-Day Invasion, this is not it. However, there is some good context provided on the lead up to the battle, the situations on the ground after the invasion, and a fine epilogue.

To sum it up, this is not for beginners, but some good information can be learned.… (more)
LibraryThing member mah048
As entertainment, its a bit dry. But as a historical text, its fabulously entertaining.

If you're curious to learn more about this segment of history, this book is concise, clear and well written.… (more)
LibraryThing member CharlesFerdinand
This is really a thinking man's Longest Day. It is very much written in the classical tradition of military history: a straight narrative, with little vignettes thrown in. An interesting aspect is that at appropriate times, the scope is broadened to give background, or to show things that were happening on the Eastern Front, or in Berlin etc.

As for the Allied side, Keegan treads carefully. He takes care to deflate some myths about Allied prowess, but does not enter into debates about strategical rights or wrongs, or the merits of Bradley, Montgomery, Patton, Eisenhower et al.

A good read… (more)
LibraryThing member yeremenko
Keegan took some heat for not specifically including the Canadians in his works on the Great War, but the Canadians are a prominent part of this book and given a fair shake.

This one of Keegan's better books and an original take, event today on the Normandy campaign.
LibraryThing member bookmarkaussie
Interesting look at the Normandy Campaign in 1944 from the point of view of the six armies involved in the campaign. I thought the Canadians were shortchanged as were the American infantry, the paratroopers were covered well. This is not a detailed campaign guide, instead it is a snapshot of the six armies during the campaign.
LibraryThing member Whiskey3pa
A very readable and thorough book on the Normandy campaign. It is a different viewpoint than either Ryan or Ambrose and compliments them very well. More macro in it's treatment.
Fewer

Armageddon : the battle for Germany, 1944-45 by Max Hastings