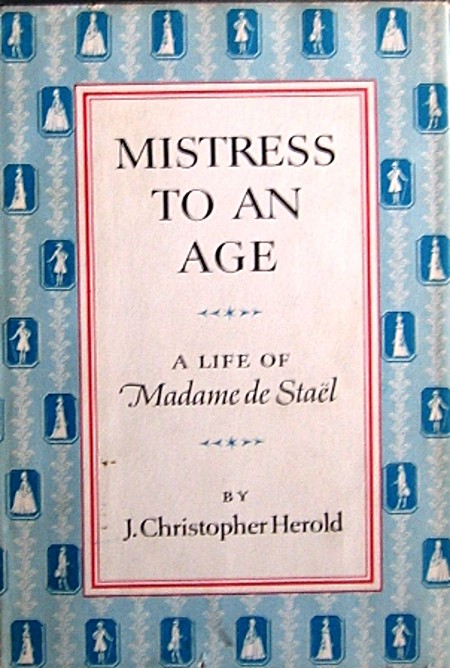 Mistress to an age; a life of Madame de Staël

J. Christopher Herold vigorously tells the story of the fierce Madame de Stael, revealing her courageous opposition to Napoleon, her whirlwind affairs with the great intellectuals of her day, and her idealistic rebellion against all that was cynical, tyrannical, and passionless. Germaine de Stael's father was Jacques Necker, the finance minister to Louis XVI, and her mother ran an influential literary-political salon in Paris. Always precocious, at nineteen Germaine married the Swedish ambassador to France, Eric Magnus Baron de Stael-Holstein, and in 1785 took over her mother's salon with great success. Germaine and de Stael lived most of their married life apart. She had many brilliant lovers. Talleyrand was the first, Narbonne, the minister of war, another; Benjamin Constant was her most significant and long-lasting one. She published several political and literary essays, including "A Treatise on the Influence of the Passions upon the Happiness of Individuals and of Nations," which became one of the most important documents of European Romanticism. Her bold philosophical ideas, particularly those in "On Literature," caused feverish commotion in France and were quickly noticed by Napoleon, who saw her salon as a rallying point for the opposition. He eventually exiled her from France. This winner of the 1959 National Book Award is "excellent ... detailed, full of color, movement, great names, and lively incident" -- The New York Times "Mr. Herold's full-bodied biographyis clear-eyed, intelligent, and written with abundant wit and zest." -- The Atlantic Monthly… (more)

LibraryThing member jwhenderson
A marvelous introduction to an amazing woman. Madame Germaine de Stael charmed the intellectuals of her age with her salon. This book, called by Dame Rebecca West 'a cornucopia of good reading," is above all the biography of a great woman. Madame de Stael was courageous and prolific in her contacts with important personages of her age. A prolific letter writer, she also wrote novels and drama. Her liaisons were legion and of particular interest is her connections with the novelist Benjamin Constant. This is an excellent introduction to the age and to a vibrant woman who helped make the age more memorable.… (more)
1 more
LibraryThing member yooperprof
Interesting account of Germaine Necker de Stael Rocca (1766-1817), aka Madame de Stael. It was said of the times she lived through that there were three great powers in Europe: the French Army, the British Navy, and Madame de Stael - and J. Christopher Herold certainly does a good job of bringing life to both this passionate woman and her confusing, hopeful, despairing, enlightened and romantic times. Yes, there may be a few passages in this book where Herold may go into a little bit too much detail summarizing Germaine's forgotten political and fictional books, but he always goes back to her life, which was filled with enough drama love and tragedy to fill an entire HBO miniseries.

She was the daughter of the great Finance Minister of Louis XVI, Jacques Necker, who did his best to save France from the abyss of economic collapse - and failed. Thus she enjoyed a front row seat for the French Revolution - in all its glory and horror. Her first husband was a Swedish diplomat who was a friend of Marie Antoinette; among her lovers were the incomparable diplomat Talleyrand, the influential economist Sisimondi, and the inflamed romantic novelist Benjamin Constant. And her second husband was a dashing French cavalryman half her age.… (more)
Fewer