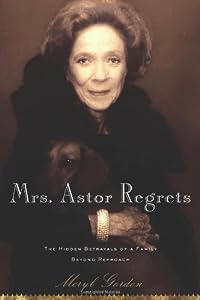 Mrs. Astor regrets: The hidden betrayals of a family beyond reproach

The fate of Brooke Astor, the endearing philanthropist with the storied name, has generated worldwide headlines since her grandson Philip sued his father in 2006, alleging mistreatment of Brooke. And shortly after her death in 2007, Anthony Marshall, Mrs. Astor's only child, was indicted on charges of looting her estate. Rarely has there been a story with such an appealing heroine, conjuring up a world so nearly forgotten: a realm of lavish wealth and secrets of the sort that have engaged Americans from the era of Edith Wharton to the more recent days of Truman Capote and Vanity Fair. New York journalist Meryl Gordon has interviewed not only the elite of Brooke Astor's social circle but also the large staff who cared for Mrs. Astor during her declining years. The result is the story of the Astor empire's unraveling.--From publisher description.… (more)

LibraryThing member maggie1944
I very much enjoyed this accounting of the last years of Mrs Astor's life and the turmoil in her family surrounding her care, and her estate. I thought the author did a credible job of being fair to all the parties and she, I believe, makes a good case that every player in this tragic drama has both virtues and faults. This is not a story for simple solutions: no heroes and no villians, just a very sad story. The one lesson one might take away is that money does complicate motives and it is best to be very careful in creating a legacy if there is much money involved.… (more)
6 more
LibraryThing member etxgardener
There's nothing like a book about a good scandal & this one has it all - money, a dysfunctional family, a matriarch beloved by the city she lives in but perhaps not as altruistic as her public persona portrays, and a son who is tired of waiting in the wings for his inheritance. The fight over the care of Brooke Astor in the last years of her life and the disposition of her estate is the stuff of soap opera. But it's all true.

Meryl Gordon had extraordinary access to the principle players in this drama and she tells this tale with flair and remarkable fairness. Since this book was published Mrs. Astor's son has been convicted of looting her estate and has been sentenced to one to three years in prison. Given his state of health, he may very well end his life behind bars. One has to feel a little sorry for him. The same, however, cannot be said of his third wife, Charlene.… (more)
LibraryThing member readingrebecca
After finishing Mrs. Astor Regrets, my feelings about the book are still unclear. On the one hand, the story of Brooke Astor, one of America’s most generous philanthropists, is fascinating, but the book itself had far too much name dropping. This is the story of a family consumed with social standing and wealth. As Brooke Astor aged, her son Tony Marshall took over more and more of her financial details, to the point that his son Phillip felt his father was taking advantage of the situation and not really caring for Mrs. Astor. He brought suit against his father, claiming that Mrs. Astor was living in near squalor in her Park Avenue apartment. What ensues is a story of greed and a family torn apart by avarice. All families have their problems, most of which we keep out of the tabloids. Unfortunately for the Astor family, all this was played out on the front page of many newspapers and talked about on television.

While Mrs. Astor was extremely generous with the Astor Foundation money, giving money to not only the Metropolitan Museum of Art, but funding after school programs in less fortunate neighborhoods, she was not a particularly generous mother with her time and affection for her only child. Although her son had a number of different careers, the Marines, as an ambassador, working for the CIA, he never achieved the star power that his mother did and never felt that he was accepted by her.

This book is well researched, the author having spoken to all parties involved with the exception of Mrs. Astor. I felt at times I was reading the Social Register rather than the story of Brooke Astor. I would have liked more history of the Astor family than was given. In a time of economic crisis, it is instructive to read the history of a family that kept its wealth for over three centuries. Meryl Gordon’s writing is fairly fluid, but could have been much better if she had not explained each person’s social standing in such detail.… (more)
LibraryThing member marient
The fate of Brooke Astor, the endearing philanthropist with the storied name, has generated worlldwide headlines since her grandson Philip sued his father in 2006 alleging mistreatment of Brooke. And shortly after her death in 2007, Anthony Marshal, Mrs. Astor's only child, was indicted on charges of looting her estate.
LibraryThing member Whisper1
Clare Boothe Luce noted "Money can't buy happiness, but it can make you awfully comfortable while you're being miserable." Her quote certainly can be applied to the life of Mrs. Brooke Astor.

Her first marriage, at the young age of 19, to wealthy Dryden Kusher netted a son and a many beatings by this alcoholic man with a violent temper. When he left Brooke for another women, soon thereafter she married wealthy Charles Marshall. She was 50 when he died. Six months later, she received a proposal by wealthy Vincent Astor. When he died five years later, she was rumored to have inherited $60 million. With shrewd investments, at one point in time Brook gave away $195 million from the Astor Foundation.

From that day forward, the regal, manipulative dame owned luxurious homes with her primary residence in a Park Avenue mansion in Upper East Side of New York. Well known for her philanthropic deeds, to name a few of her benefactors, she donated millions to the New York Library and the Metropolitan Art Museum. To give millions at a mere signature of a check, entitled her to be powerful and exceedingly popular.
Known for her over the top dinner parties, if you were invited, you were socially connected and had to know how to handle yourself among the upper echelon.

Never professing to like children, her only son soon learned that he was not loved. Waiting in the wings for mommy dearest to die took a much longer time than he imagined. Dying in 2007 at the ripe age of 105, son Anthony, 89, was promptly served with a law suit instigated by one of Anthony's twin sons who claimed his grandmother spent the end of her life in squalor while his grandfather swindled millions.

At the heart of the charges was the fact that sonny boy forced mamma to sign three codicils to her will, each one entitling him to ever increasing assets. The third signature was deemed fictitious by a stellar hand writing expert.

A favorite painting, Up The Avenue From 34th Street, by Clide Hassan which hung in her regal library, until it was sold by her son for 10 million, netting him a 2.5 commission. Originally promised to the Metropolitan Art Museum, Anthony convinced his mother that her millions were dwindling and this had to be sold in order to support her life style.

Knowing she suffered from Alzheimer's did not stop Anthony from brazenly pilfering millions upon millions. In court proceedings, Brooke's signature on the codicils became a pivotal focus. Years before, Anthony told others of Brooke's diminished capacity. How then, could she be of the right frame of mind to sign away millions willingly?

After a lengthy trial with a parade of rich and famous testifying, poor little rich boy Anthony was sent to prison. Walking in the court room with a Brooks Brothers well tailored suit, he walked out with hand cuffs and standard jail house garb.

While there were way too many pages of names and events that bogged down the main story, this is worth reading.… (more)
LibraryThing member jonerthon
Great if you want to get the details about a very high-profile elder abuse and power-of-attorney mismanagement case, not so great if you want a lesson on how to prevent it going forward.

Possibly the most depressing book review I've written yet. But true! Why was this ever on my TBR list?
LibraryThing member briandrewz
This was an absolutely absorbing account of the last days of an iconic New Yorker, the last Mrs. Astor. Brooke Astor's life was an extraordinary one. The heartbreaking circumstances surrounding her final years is tragic.

The book is completely engrossing. It's hard not to put it down. The details are shocking. To read of a woman who was used to so much and was later reduced to so little (not monetarily speaking) is sad.

This is a must read for any lover of New York high society.… (more)
Fewer