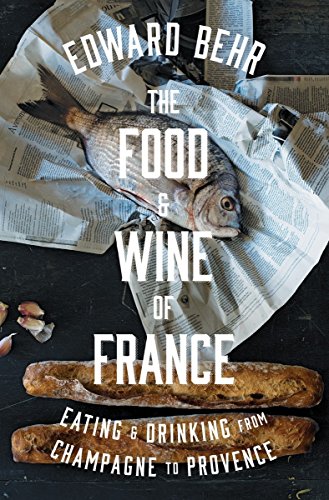 The Food & Wine of France: Eating and Drinking from Champagne to Provence

In THE FOOD AND WINE OF FRANCE, the influential food writer Edward Behr investigates French cuisine and what it means, in encounters from Champagne to Provence. He tells the stories of French artisans and chefs who continue to work at the highest level. Many people in and out of France have noted for a long time the slow retreat of French cuisine, concerned that it is losing its important place in the country's culture and in the world culture of food. And yet, as Behr writes, good French food remains very, very delicious. No cuisine is better. The sensuousness is overt. French cooking is generous, both obvious and subtle, simple and complex, rustic and utterly refined. A lot of recent inventive food by comparison is wildly abstract and austere. In the tradition of great food writers, Edward Behr seeks out the best of French food and wine. He shows not only that it is as relevant as ever, but he also challenges us to see that it might become the world's next cutting edge cuisine.… (more)

LibraryThing member TheYodamom
If you love France, their food, their flavors, their wines and their zest for enjoying these things, this is the book for you. This is a foodie's roadmap to heaven via French delights. The author travels across the country meeting the famous makers of greatness, baking, cheese making, candies, wines all the delicacies and more. He visits the historical food landmarks, meets with the greats and discusses their philosophies on the specialty item they are famous for. It is a fascinating read for a traveler, foodie, or chef.
I have gift a few copies to friends, and mapped out the must stops for a trip to France. If I follow it I'm sure to gain excess pounds but I will enjoy everyone.… (more)
1 more
LibraryThing member TheoSmit
This is about French ingredients. You've probably read it all before, but he says it very well.

Mr Behr seems to labor under the illusion that the quality of a cuisine is determined by the ingredients it has to work with and he has a particular soft spot for cheese.

However, a cuisine is much like terroir. The grapes, the growers and the winemakers and the weather are as important as the location. The same goes for a cuisine. The ingrediets are only a part of it and not the most important.… (more)
Fewer

Poor Man's Feast: A Love Story of Comfort, Desire, and the Art of Simple Cooking by Elissa Altman
The table comes first : family, France, and the meaning of food by Adam Gopnik
Provence, 1970 : M.F.K. Fisher, Julia Child, James Beard, and the reinvention of American taste by Luke Barr
A goose in Toulouse : and other culinary adventures in France by Mort Rosenblum
As they were by M. F. K. Fisher
3 more
My life in France by Julia Child
A life in letters : correspondence, 1929-1991 by M. F. K. Fisher
The tenth muse : my life in food by Judith Jones
Fewer